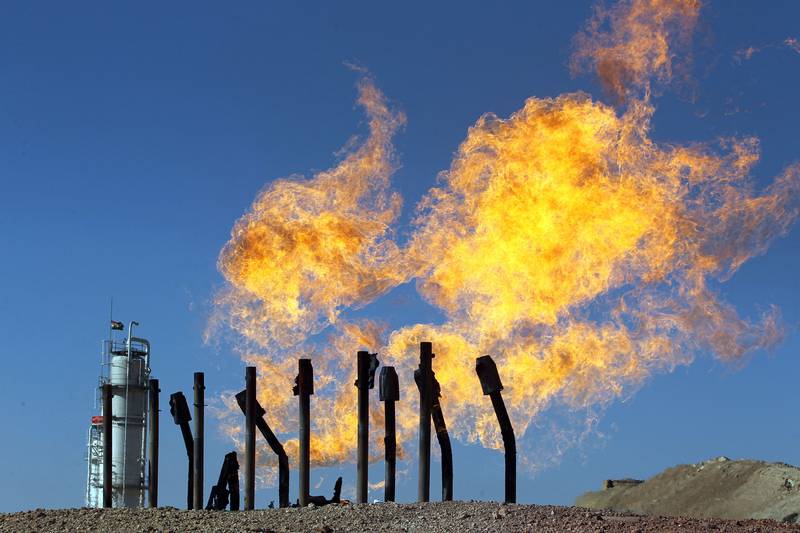 On flying from Dubai to Iraq’s Kurdistan region at night, the geography below is written in unmistakeable orange-yellow flames.

The lines of burning unwanted gas map out the Rumaila and West Qurna oilfields in southern Iraq, then the historic northern Kirkuk field. Driving from Erbil to the northern city of Dohuk, another big flare crowns a mountain at the Shaikan field.

This wasteful combustion vividly shows how Iraq and its Kurdistan region are simultaneously bound together and divided by oil — and its mismanagement.

Last October’s elections were followed by a year of wrangling, protests, outside pressure, and a mix of sporadic and calculated violence, before Iraq finally confirmed a new prime minster, Mohammed Shia Al Sudani, on October 27.

The Kurdish parliament has delayed its own elections for a year, until late next year.

The new government combines the pro-Iranian Co-ordination Framework, Sunni parties represented by parliamentary speaker Mohammed Al Halbousi, and the Kurdish parties, of which the Kurdistan Democratic Party (KDP) and the Patriotic Union of Kurdistan (PUK) will each receive two ministerial positions.

On Wednesday, the Kurdistan Regional Government (KRG)’s prime minister, Masrour Barzani, told an audience in Dohuk that he was assembling a team to “settle all outstanding issues” with the Baghdad government, including a new federal hydrocarbon law. There is much to settle.

The struggle to seize the prize of the new government opened old wounds of energy sector contention that have pained Baghdad-Kurdistan relations ever since 2003.

On February 15, Iraq’s Federal Supreme Court, in a ruling widely seen as politicised, abruptly took up a decade-old case and declared that the Kurdistan Region’s oil law from 2007 was unconstitutional.

The law gave the region the right to manage its petroleum sector independently of Baghdad, and to sign contracts with international companies for exploration and development.

Following this case, the Ministry of Oil launched lawsuits against several international oil companies over their allegedly illegal contracts with the KRG and told major oil service firms such as Halliburton and SLB that they will not be awarded work in the south, unless they stop their activities in the Kurdish region.

In April, missiles from Iran hit a house of Baz Karim, a prominent oil businessman and KDP backer, in Erbil, and others landed near his company’s refinery. Rockets also fell on the Khor Mor field, operated by a consortium led by Sharjah-based Dana Gas and Crescent Petroleum, halting work on an expansion, although they did not cause serious damage and the perpetrators are unclear.

These actions were mostly seen as measures to pressure the KDP to fall into line with the Co-ordination Framework in forming the new government. But there was also speculation they were warnings to the Kurdistan region not to co-operate with Israel and not to send gas to Turkey, where it would compete with Iranian supplies.

The Supreme Court stepped in again in September to rule that the newly-reinstated Iraq National Oil Company (INOC) was also unconstitutional. INOC would have theoretically taken over operations in the Kurdistan Region as well, but was also seen as a power-grab by the previous oil minister.

In July, the then Iraqi oil minister, Ihsan Ismaeel said that an arbitration case filed in 2014 between Iraq and Turkey was nearing a judgement.

Baghdad’s complaint is that Ankara has allowed the KRG to use the Iraq-Turkey pipeline to export oil independently of the central government, and that this violates the treaty governing the pipeline’s operations, signed in 1973 and updated in 2010. It is claiming $26 billion in damages.

Expectations are that the tribunal will find in Baghdad’s favour, even if the quoted amount is exaggerated. It is unlikely that cash-strapped Turkey will pay, but it may find a compromise that could cut out the Kurds and put oil exports and payments back under Baghdad’s control. The cat-and-mouse game of suing tankers carrying Kurdish oil on the high seas might resume.

Potentially, about 400,000 barrels per day of Kurdish oil exports and another 78,000 bpd the region transits on behalf of Baghdad could be at risk. That would be dangerous for world markets if more oil is required to replace sanctioned Russian crude next year, and if Opec+ again raises production targets. And the economic impact on the Kurdistan region would be catastrophic.

These legal cases also threaten the prospect of gas exports from the Kurdistan region. It is one of the few European neighbours that could send substantial additional gas, enough to replace 10 per cent or more of prewar Russian supplies, by pipeline.

Mr Barzani also mentioned the possibility of providing Kurdish gas to the rest of Iraq, which suffers from endemic shortages of fuel and electricity, and buys unreliable supplies of Iranian gas at costly rates.

But such projects need major international financing, which legal uncertainty will deter.

And the Kurds themselves are divided: most of the gas is in the south of the region, controlled by the more Baghdad-friendly PUK, and would have to pass through KDP areas to reach Turkey. Bafel Talabani, the PUK’s co-chair, said that if gas contracts were not transparent, “they will have to export gas pipelines over Bafel Jalal Talabani’s dead body”.

Iraq in general, and Kurdistan in particular, could be a critical component of the new emerging European energy security model.

Gas flares today that poison the air and pollute the planet could instead be lighting Iraqi homes and warming European ones. But this will only happen if the EU can make a firm stand on what it wants, and work with the US to mediate a durable cure for Iraq’s energy ills.

Islamic State Says Leader Has Been Killed
The terrorist group said its top leader died recently in fighting, less than a year after the death of his ...
China's Covid Protests Began With an Apartment Fire in a Remote Region
Firefighting delays in the city of Urumqi, seen by many Chinese as related to strict pandemic controls, set off wide ...
Twitter Becomes Stage for China Protests Despite Ban by Beijing
The platform is proving to be a critical avenue for those who seek to broadcast images of demonstrations to the ...
Jiang Zemin, Who Steered China Into New Era, Dies at 96
Jiang Zemin, the former Chinese leader who came to power after the quelling of the Tiananmen Square protests and presided ...
Eurozone Inflation Eased in November, but Further Rate Rises Likely
Consumer prices in November were 10{21f3d0a7b71d4bee96485cb1eaaf96f91c7e77d2b36af795511e8c2247567034} higher than a year earlier but down from the 10.6{21f3d0a7b71d4bee96485cb1eaaf96f91c7e77d2b36af795511e8c2247567034} annual rate of inflation ...
Ukraine's Power Shortages Force Millions of Refugees Into Lengthier Exile
Kyiv’s call to its diaspora to stay abroad is making many upend their lives again and turn their temporary flight ...