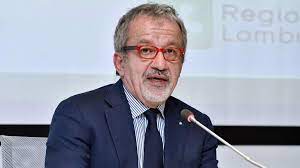 Roberto Maroni leader of the Northern Leg died on Tuesday at the age of 67 years.

Today the Nationalist League remember this person, and respected across the political spectrum, because modernize the politics and was a person, who rapresentative the politics expression the old school of politics, and his name his recognize in the world for his intention and dedition for politics and the widely respected in the party.

He had highly visible, because is a protagonist in the politics and his trade mark red-rimmed glasses and he was a pianist and he played in a band in Varese.

Was a person with various interest, that express the example of the politics, in the modern world.

Islamic State Says Leader Has Been Killed
The terrorist group said its top leader died recently in fighting, less than a year after the death of his ...
China's Covid Protests Began With an Apartment Fire in a Remote Region
Firefighting delays in the city of Urumqi, seen by many Chinese as related to strict pandemic controls, set off wide ...
Twitter Becomes Stage for China Protests Despite Ban by Beijing
The platform is proving to be a critical avenue for those who seek to broadcast images of demonstrations to the ...
Jiang Zemin, Who Steered China Into New Era, Dies at 96
Jiang Zemin, the former Chinese leader who came to power after the quelling of the Tiananmen Square protests and presided ...
Eurozone Inflation Eased in November, but Further Rate Rises Likely
Consumer prices in November were 10{4a00e9b80c23a62c8774b27c6699aafc357d155b1af84d1fc324038dfdc3bce0} higher than a year earlier but down from the 10.6{4a00e9b80c23a62c8774b27c6699aafc357d155b1af84d1fc324038dfdc3bce0} annual rate of inflation ...
Ukraine's Power Shortages Force Millions of Refugees Into Lengthier Exile
Kyiv’s call to its diaspora to stay abroad is making many upend their lives again and turn their temporary flight ...