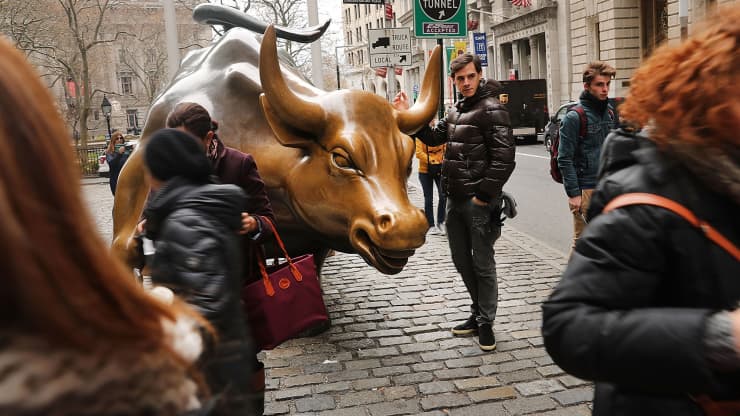 The Dow Jones Industrial Average, the relative laggard, finished up 188.57 points after rallying more than 300 points earlier in the session to an intraday record.

“The stimulus is substantially larger than had been expected earlier in the year. Its provisions are also likely to be highly supportive for consumption and growth,” he added in reference to the stimulus. “This windfall comes on top of existing signs of pent-up demand from US consumers.”

But while the S&P 500 clinched a new closing record, the Nasdaq Composite posted the best gain on the day with a climb of 2.5% amid the pivot back into popular technology equities. Moves that carried that index higher included a 4.7% pop in Tesla and gains of at least 3% in Apple, Facebook, Alphabet and Netflix.

The Nasdaq is clawing its way out of a 10% correction it suffered earlier this month and remains 5.48% below its own record that it set in February.

A quick rise in bond yields put pressure on the tech-heavy index earlier in March as investors shifted toward economically sensitive, cyclical stocks. Sharp increases in interest rates can put outsized pressure on high-growth tech stocks as they reduce the relative value of future profits.

That trend appeared to partially reverse on Thursday as bond yields calmed; the Nasdaq is up 3.7% so far this week and is outperforming both the S&P 500 and the Dow over the period. The 10-year Treasury yield, which peaked around 1.6% this month, was last seen just north of 1.53%.

Signs that the U.S. economy may be set for a healthy 2021 were plentiful on Thursday after Biden signed his much-anticipated $1.9 trillion coronavirus relief package into law. The plan will send direct payments of up to $1,400 to many Americans, and will also put nearly $20 billion into Covid-19 vaccinations and $350 billion into state, local and tribal government relief.

Biden announced Thursday evening that he would direct states to make all adults eligible for the vaccine by May 1 in his first primetime address as president.

Investors also cheered a slightly better-than-expected reading on weekly jobless claims that showed a decline in the number of first-time applicants for jobless benefits.

The United States of America and Russia have recently been at loggerheads over the issue of Ukraine. Weeks ago the leaders of the two superpowers be [...]
Leggi di più
19 Gennaio 2022 18:40 Giancarlo Elia Valori 77
Main Partner

Biden Seeks to Reassure Ukraine, Vowing a Strong Response to Russia
President Biden said any Russian troop movement into Ukraine would be considered an invasion, clarifying earlier remarks about a ‘minor ...
U.S. Charges Another Suspect in Haitian President's Killing
Federal prosecutors in Miami have detained and charged a second man in connection with the July assassination of Haitian President ...
Havana Syndrome Unlikely Caused by U.S. Foes, CIA Says
The agency concluded that other medical conditions, stress or unexplained factors could be behind the ailments that have been reported ...
U.S. Allows Baltic NATO Members to Send Arms to Ukraine
The decision will enable Estonia, Lithuania and Latvia to send Javelin antitank weapons and Stinger air-defense systems for Ukraine’s forces.
Putin Loves to Roll the Dice. Ukraine Is His Biggest Gamble Yet.
The former spy chief’s tolerance for risk is tested as he threatens a ground war unseen in Europe since the ...