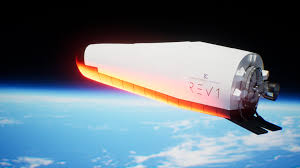 Which regions will build the Silicon Valleys of the future?
A new type of solar panel
A new AI model can accurately predict human response to novel drug compounds

The Thales Alenia Space have stipuleted an agreement with the Space Cargo Unlimited, to realize a spacecraft, autonomy and reusable, that it has the scope to function a space fabrique.

The spacecraft wihout crew, will be the key to realize, an emerging industries in orbit, this according from an european interprises, that have encharge Thales Alenia Space to develop a spacecraft, called REV1 for the mission that, it will start in the end of the year 2025.

REV1 is realized to transport above a 1000 kilograms of cargo, for different months in orbit, where it will dock with an orbiting service module reusable, that Thalenia Alenia Space is developing. This module of dervice will have the solar panels and electric thrusters, to remain in orbit for 10 yesrs or above 20 missions.

After it has completed his mission a heat shield mounted on REV1 would allow it to re-enter the Earth’s atmosphere.