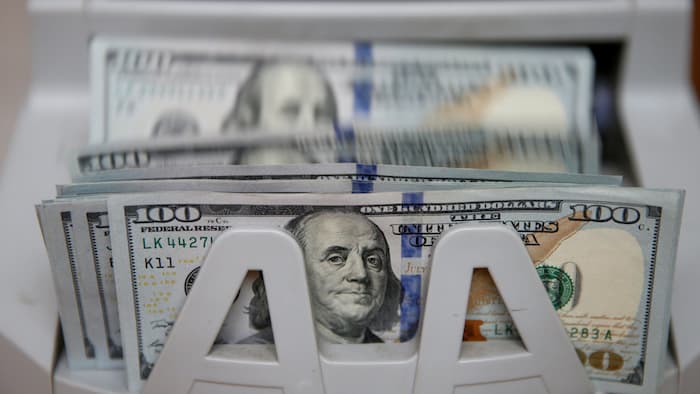 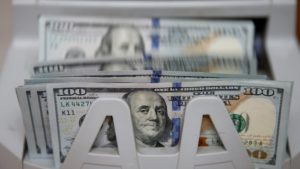 Currency dealers in search of the next great trade love a compelling trend, and after looking all year they seem to have found one in the last place expected — the US, where Donald Trump is president-elect.

Before the election predictions were tentative, safe bets assumed only modest shifts in the foreign exchange status quo. Yet Mr Trump’s victory, and Republican success in retaining Congress, have prompted several analysts to make a bold call: the dollar is going to rise, and rise sharply.

Their confidence is based on prospects for a new US economic regime of loose fiscal and tighter monetary policy. They believe Mr Trump can garner enough political support to push through promised tax cuts and infrastructure spending, laying the ground for the return of inflation that in turn demands a faster sequence of rate moves from the Federal Reserve.

“We are on the verge of a Reaganesque moment,” says Marc Chandler of Brown Brothers Harriman, adding that a similar policy mix was deployed by Germany after the fall of the Berlin Wall in 1989 that sent the Deutschmark higher.

In the Reaganomics of the 1980s, President Ronald Reagan and his Fed chair Paul Volcker unleashed a potent mix of tax cuts, government spending and higher interest rates to bring inflation under control. 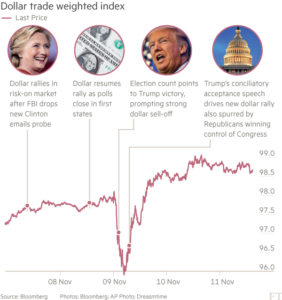 It heralded a dollar boom: from President Reagan’s inauguration to its all-time peak in February 1985, the US currency rose 45 per cent.

There are of course differences. “Trump looks like Reagan-lite,” Mr Chandler cautions. Neither Fed policy tightening nor fiscal stimulus are likely to be as weighty as they were under Reaganomics, a time of both much higher tax rates and interest rates.

Even so, the dollar is set for a 20 per cent appreciation, he believes, taking it not just beyond parity with the euro but to its all-time high of 0.8270 of October 2000.

Add to the mix Mr Trump’s promises of tax reforms to enable the repatriation of corporate holdings held overseas and there are plenty of analysts confident of a strong dollar outlook.

Bilal Hafeez, Nomura’s G10 FX strategist, points out the Trump-Reagan parallels are not entirely clean. Reaganomics was a reaction to high inflation of the 1970s, whereas today’s backdrop is low inflation, real growth and secular stagnation, he says.

Yet he still sees the prospect of more fiscal policy as dollar-positive, boosting US growth and leading to higher interest rates, at a time when Europe and Japan are engaged in looser monetary policy. A weaker yen and euro against the dollar and expectations of stronger US growth are buoying shares in Japan and the eurozone.

“My bias would be to look for the dollar to strengthen through all this,” says Mr Hafeez, who notes that after months of bumping along to the rhythm of Fed dovishness, the dollar was reaching a turning point ahead of the election, as investors anticipated a December rate rise.

But Luca Paolini, chief strategist at Pictet Asset Management, believes the market has been getting ahead of itself if it thinks a new dollar bull run has begun. Three reasons make him sceptical about the dollar’s prospects.

First is how markets traded in the aftermath of the election. Markets had fallen sharply when Mr Trump’s victory became more certain, as traders weighed up “hard Trump” policies — protectionism, tighter immigration, isolationism.

They then rallied after his acceptance speech. An unusually mollifying tone, in which the president-elect praised Hillary Clinton, said it was “time to come together” and told the international community that “we will deal fairly with anyone”, was enough for traders to contemplate what “soft Trump” might look like.

“I was amazed how the market reacted to the conciliatory speech, which is what any sensible person would have said. The market is a bit too optimistic,” says Mr Paolini.

Second, while the Trump agenda has Reaganomics overtones, many questions remain unanswered, including the make-up of his administration, the degree of co-operation between the president-elect and Republican lawmakers, and his relationship with Fed chair Janet Yellen, who he criticised during his campaign.

Tax cuts may be one part of the agenda the market can expect to see implemented. “But on trade, immigration and the Fed, it’s much more difficult to say,” Mr Paolini says, while tax repatriation may encourage more corporate buybacks and M&A deals, but will “not make a huge difference”.

Finally, comparisons with the 1980s dollar bull run are flawed. “The dollar was cheap, so it was not surprising there was a huge rally. Today, US equities are very expensive. If you had a Trump victory when the dollar was weak and price-earning ratios were at 10, you would argue that the dollar would get stronger,” he adds. But we do not.

It may be that foreign exchange investors are just glad to have a firm trading strategy in focus, and fiscal stimulus is easy to contemplate at a moment when Mr Trump’s actions and policies remain hoped-for hypotheticals.

“There will be bumps along the road in the next week or two,” says Mr Hafeez. “This is the point of vulnerability for all these expectations built up around stimulus.”