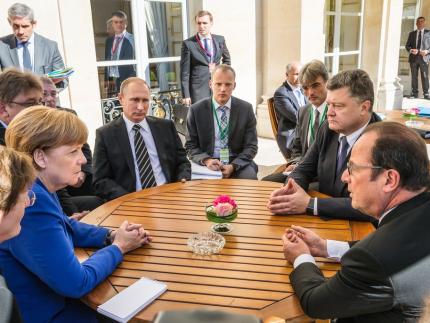 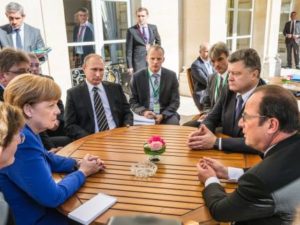 Russia aims to be a global power, on equal footing with the United States. This is understandable with regard to the self-image of Russia as the successor of the Soviet Union, which was indeed one pole in a bipolar world order — on equal footing with the United States. But the ambition is not backed up by corresponding power resources. For many years Russia has tried to build its power on the energy riches of the country. But the concept of becoming an “energy superpower” has largely failed. The income from oil and gas has declined massively, and the dependency of the Russian economy on energy has turned out to be a curse: all attempts to diversify the economy have failed. Economically, Russia is declining further.

Moscow’s aggressive foreign policy, built on intimidation and the submission of others, has isolated Russia and has cut the country off further from Western capital and Western technology. And Russia’s soft power is weak. Unlike the Soviet Union, the country offers no universalist ideology addressed to humanity. Official Russian propaganda abroad is either meant to address radical groups in the West or to strengthen the sense of belonging among Russian-speakers in other countries. Russia has few partners or friends; it doesn’t have prestigious academic institutions, its cultural attractiveness is at an all-time low.

The only power resource that can substantiate Russia’s claim to global power is its nuclear capability. Here Russia indeed is on equal footing with America; Russia has 7,300 estimated nuclear warheads, the United States 7,000; all other nuclear powers have fewer than 300. Russian President Vladimir Putin is basing his new foreign policy strategy on this power resource. It is its nuclear arsenal which gives Russia a freer hand in its military interventions in Ukraine and Syria.

A key, perhaps decisive question for the European security in the next years and decades will be whether Russia is going to be successful in its redefinition of the playing field in Eurasia: as a conflict in which nuclear intimidation again plays the central role, just like during the Cold War.

On this playing field Germany has very bad cards. It has no nuclear weapons and is therefore dependent on protection by allies; mainly by the United States, but also by France and Britain. Faced with nuclear intimidation, many Germans almost instinctively resort to the strategy of the Cold War, Ostpolitik, and détente. The Russian side however sees this reaction only as a sign of weakness and susceptibility to blackmail.

German Chancellor Angela Merkel has responded to Russia’s definition of the playing field as nuclear with a different definition. While Putin’s reference is the Cold War, her reference is the 1990s with their optimistic view of globalization. For Merkel, Russia’s aggression is an attack on globalization: on dialogue, cooperation, interdependence. The conflict over spheres of influence and territorial claims that Russia brings into Europe is for her a regression into a period of history, which “we thought we had overcome.” Even geopolitical strength today can “only be built with the principles and means of our time.”

Merkel and Putin are wrestling over whose definition of the playing field is going to prevail. Will economic strength and cooperation or nuclear intimidation and military conflict be decisive in the coming years?

For the Kremlin, Europe is only an annex of the United States, not a subject of world politics in its own right. Putin’s goal is the same as the goal of the Soviet Union during the Cold War: to split Europe from the United States and thereby to weaken both sides of the Atlantic. At the same time, Moscow wants to make sure that no influential Europe emerges, capable of acting collectively.

How this conflict is going to end will to a large extent depend on Germany. Merkel has positioned herself as an opponent to Putin. Together with U.S. President Barack Obama, Merkel has led the West during the Ukraine conflict, and she has developed a response to Russia’s attack on Ukraine which has surprised the Kremlin. The means to which she resorted have characteristically been not military but, civilian, mainly economic sanctions.

To the degree to which the West is capable to act, it can define the playing field. The West must take the challenge from Russia seriously and must push back in a friendly but decisive manner: by affirming the rules of the international order and by the use of sanctions. The more firm and united Europe and the United States are, the better will they be able to keep the new East-West conflict in the arena where they are immensely stronger than Russia: in the field of the economy and diplomacy.