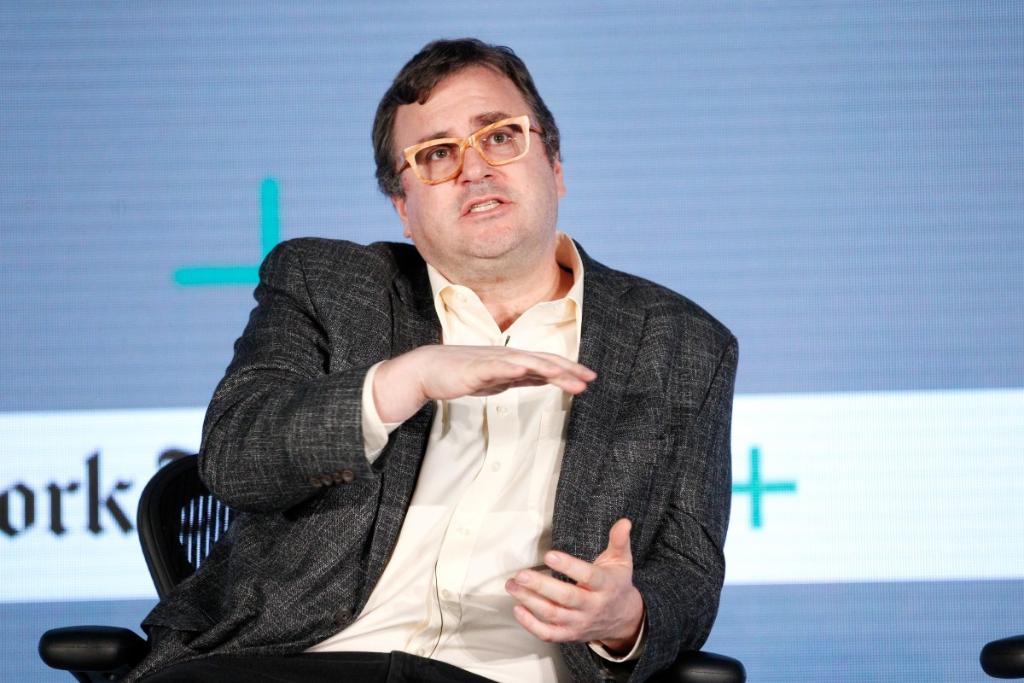 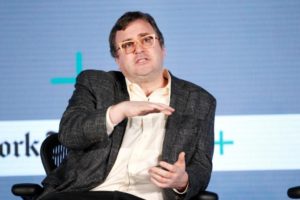 As LinkedIn’s chairman and cofounder, a partner at venture capital firm Greylock and a mentor to tech CEOs like Airbnb’s Brian Cheskyand Convoy’s Dan Lewis, billionaire Reid Hoffman has plenty to keep him busy. But the 49-year-old entrepreneur also takes time for a little-known LinkedIn LNKD +0.07% business that he recently helped start:ProFinder, an online marketplace for matching LinkedIn users to skilled “white-collar” freelancers.

ProFinder, which first officially launched in October last year in San Francisco with a team of a few dozen LinkedIn employees, now boasts 50,000 LinkedIn-approved freelancers across the U.S. in 140 service categories, like architecture, accounting, real estate, design and copywriting. Hoffman and other LinkedIn executives say the nascent marketplace has the potential to become much bigger – a global platform serving millions of customers challenging other “gig” marketplaces with overlapping service areas like Mountain View, Calif.-based Upwork (12 million registered freelancers) and San Francisco-based Thumbtack (200,000 “blue-collar” and “white-collar” professionals).

For now, ProFinder is available in the U.S. and only accepts U.S.-based freelancers. However, LinkedIn is rapidly expanding the team and expects that demand for the service will eventually be in the millions of customers globally.

From the beginning, Hoffman has taken a personal interest in ProFinder, which proves one of his core beliefs about networks: Done right, they are powerful platforms upon which to build businesses.

“ProFinder fits into our mission of creating the best possible economic opportunities and advancement opportunities for every member,’” Hoffman said in an interview. “It provides a way for freelancers to efficiently find customers, and similarly, helps professionals navigate life.”

“The concept fits very well both within the theory I’ve looked at for how one can build great new applications on top of networks, and within LinkedIn’s mission — to economically empower every professional in the world — so I said, ‘Let me help as much as I can,’” he added.

Projects are free for any LinkedIn member to create, and now, more than 85% are fulfilled within 24 hours, meaning they are matched with at least two proposals from qualified freelancers. LinkedIn said the other 15% of jobs are typically highly niche, and that the ProFinder team works closely with professionals to connect them with a well-suited freelancer. The stats suggests LinkedIn has enough local density to efficiently match customers with service providers.

“We were very pleased with that result,” Hoffman said. “When we started, we didn’t know if we would get there.”

ProFinder team members say Hoffman has played a crucial role in everything from coming up with the initial concept to shaping product features, the business model and marketing campaigns. And Hoffman continues to guide overall strategy as an advisor to the team, a role he reserves for just a handful of other startup-like teams within LinkedIn. Mentorship is a big part of Hoffman’s life: “I love working with the entrepreneurs, partially because I love working on projects that can massively improve the lives of hundreds of millions of people.

LinkedIn said its internal culture aims to support bottom-up entrepreneurialism within a larger company structure. The company hosts regular “InDays,” which give employees the chance to brainstorm entrepreneurial projects that could scale to hundreds of thousands of professionals, in a range of areas like education and job hunting. If they’re approved, teams can get a budget and headcount to pursue them.

“The two extremes of strategic direction in a company might be completely grass roots, people can do whatever they want with 20% time, and the other is to say it’s completely top-down from executives and people who control a bunch of resources,” Hoffman said. “We try to get the strongest blend of both.”

Hoffman is also optimistic that Microsoft’s acquisition of LinkedIn, the $26.2-billion cash deal expected to close some time this year, will propel ProFinder in the long term. One can imagine finding a designer on ProFinder to complete tasks on a range of Microsoft MSFT +0.00% tools, from Powerpoint to Excel.

Freelancing on the Rise

The potential for ProFinder was apparent to LinkedIn through its user data. The number of freelancers on LinkedIn has grown more than 40% over the past five years, as professionals have shorter “tours” at companies and seek more autonomy. And search data indicated that members actively looking for service providers on LinkedIn on a project, which encouraged employees to find tools to support the organically growing marketplace.

“There has definitely been a trend in the industry away from full-time work where you’re at the same company for 30 years and get a pension at the end of it, to more flexible appointments with shorter durations,” said LinkedIn’s VP of product David Thacker. “One of the biggest challenges for freelancers is finding a steady stream of clients and projects. We thought, LinkedIn can be the perfect tool for finding this work.”

“No matter what you’re trying to do or where you live, chances are you’ll be able to find a quality match,” Thacker added.

Currently, the four states whose workforces have the highest percentage of freelancers are New York, California, Oregon and Vermont. Over the past five years, the number of freelance professionals has increased the most in North Dakota, Louisiana, Mississippi and Washington DC, growing more than 40% in each region, according to LinkedIn data, as consumers increasingly seek project-based services. (A recent Pew poll showed that 72% of Americans have used a shared or on-demand service.) Some of ProFinder’s most popular categories have been career coaching, design, marketing and writing and editing. And among LinkedIn users, the industries in which freelance work is growing the most are healthcare, retail and consumer products, software technology and media and entertainment.

LinkedIn’s authenticated profiles and map of user connections give ProFinder a key competitive advantage. LinkedIn’s matching system, which currently relies on a combination of algorithms and human touch, prioritizes matching users with freelancers who are a first or second-degree connections, which helps customers vet freelancers and essentially digitizes word of mouth.

And the “identity” aspect of profiles helps bring credibility to recommendations by strangers, as well as to freelancers, who typically share their experience, education, skills and contact details. LinkedIn also intentionally matches ProFinder customers with freelancers who are local. In many cases, freelancers can note that they have helped neighbors complete a similar task.

“There is a general sense of credibility on LinkedIn,” said Gyanda Sachdeva, director of product management for LinkedIn Premium. She noted that LinkedIn will likely become more stringent about verifying freelancers’ backgrounds and licensing in the future.

“We can build trust instantaneously,” Sachdeva said. “This provides a distinct advantage to the buyer and well as the provider — You build a longer-term connection with the client with the potential for easier repeat business.”

To launch the platform, LinkedIn reached out individually to many freelancers with strong LinkedIn profiles, inviting them to join through a quick application. And the company regularly offers feedback to freelancers, suggesting they bolster their profiles and collect recommendations.

Freelancers can submit about nine proposals to complete projects for free. They need to pay for a Business Plus subscription ($60 per month) or above once they have submitted 10 or more proposals, after which they can submit an unlimited number. LinkedIn says the monetization model could change over time, but will likely be subscription-based. While ProFinder does not have a built-in payment system to transfer funds from clients to freelancers and exchanges happen off of the platform, freelancers say professionals pay in a timely manner (it helps that users are held accountable to their professional profiles.) And the team could add a payments feature down the line.

Sachdeva said customers so far have been surprised by the speed with which freelancers get back to them and by the quality of their work. She said her team has approached scaling the platform with “high-touch” support, calling customers directly to hear their feedback, reviewing every submitted project through the “customer success” team, personally addressing spam, and in many cases, pairing freelancers with projects by hand. And that’s just fine for LinkedIn for now, as the team is working to ensure quality before focusing on profit.

“Reid [Hoffman] has said that early-stage startups need to do things that don’t scale but help set product-market fit,” said Vaibhav Goel, a group product manager, noting that LinkedIn CEO Jeff Weiner has also been an advocate of the venture. “We’re training algorithms to do this over time.”

Kim Jones, who has worked as a copy editor and writer for 13 years, was one of the first freelancers to join ProFinder in Atlanta, Georgia. Within a week of joining, she got her first project. Jones said she prefers ProFinder to a host of other job boards and platforms because she doesn’t have to wait at her computer to apply in real-time to openings. LinkedIn takes care of matching, so she doesn’t have to worry about competing with dozens of applicants to catch the client’s eye. She also likes that freelancers can negotiate their own pricing.

“On ProFinder, you can count on the fact that you’re going to get a living wage that is indicative of your experience,” she said in a phone interview, noting that she has always been paid within 48 hours of completing a project. “It’s kind of like the difference between a museum installation and a garage sale. On LinkedIn, the clients are serious. They want the work done fast, and they’re willing to pay fast.”

Jones said she expects ProFinder to surpass Upwork and Thumbtack as her main source of jobs, and that it takes her about 50% less time to secure a project on ProFinder than it does on Upwork.

One customer on the service, Adam Dinnebeil, a New York-based energy conservation engineer, was attracted to how quickly ProFinder put him in touch with professionals directly. When he was looking for a personal tax accountant early this year, ProFinder sent him a list of “bids” from five freelancers within an hour. The freelancers provided their contact details on the site, and many offered to meet in person.

“They were all CPAs and all experienced,” Dinnebeil said in a phone interview. “It was actually difficult to make a decision because three out of five of them were low priced and highly qualified.”

Dinnebeil said he plans to hire the same accountant to do his taxes next year.

“This is capitalism at its best: Get the buyers and sellers dealing with each other directly,” Dinnebeil said. “It worked like a charm.”