Government cost cuts could encourage budget compromise with the EU 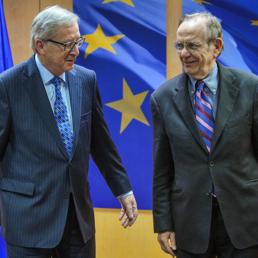 A political compromise, based on a flexible reading of European budget rules as pertains to exceptional circumstances, is still a very real option. But for it to become explicit by December 5-6 (when the Eurogroup and Ecofin will weigh in), a number of things must still happen and of different steps.

The latest phase of the confrontation underway betweenRome and Brussels, after some on the Commission balked at the response sent last week by Economy Minister Pier Carlo Padoan and Prime Minister Matteo Renzi explaining that Parliament had authorized a higher deficit of up to 2.4%, in many ways it is one of the steps along the way.

It’s a debate that is unspooling on two parallel tracks: technical and political. The second will prevail, a constitutional referendum on December 4 by now celebrated, through a sort of “work in progress,” that opens November 9 with the new macroeconomic estimates put out publicly by the Commission, the subsequent opinion on the budget plans on November 17, and the proposed recommendation to put to the Eurogroup and Ecofin.

Political compromise necessitates agreement on additional costs for earthquake and immigrants that the government quantifies as 0.4% of GDP (€6.5 billion). That justifies the increase from 1.8% to 2.3% of the 2017 nominal deficit, and an increase from 1.2% to 1.6% of the structural deficit target (net of variations in the economic situation and one-off costs).

The opening of Brussels, and Berlin, on spending for emergencies, opens the door to excluding those lines when calculating the deficit. The negotiations are mainly about the added costs to be put towards securing buildings, which according to EC accounting orthodoxy, aren’t considered exceptional circumstances.

There are things to agree on within this context, that could also call into questions the clause for investment that Italy took advantage this year to the tune of 0.25% of GDP, versus 0.5% (of the total) agreed to for the clause on reforms, the 0.04% for the increased costs of the refugee crisis, and 0,.6% for one-time, security-related expense.

An outright rejection of the budget doesn’t seem to be a credible option (given Europe’s current political situation), nor do sanctions.

The government ought to offer some kind of “concession” aimed at reaching an agreement and that could be more incisive cost cut when the budget is discussed in Parliament.

That would ensure at least an 0.1% cut in the structural deficit, which the Commission might consider sufficient to “approve” the budget, even with the ritualistic recommendations to get the public debt under control.