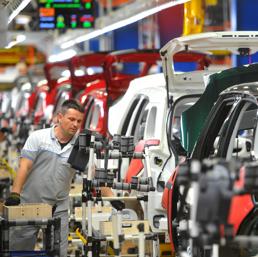 Building a bridge between Italian and European automotive components and Japan, to create business opportunities and boost trade. That’s the goal of Jama-Clepa Business Unit, an event that took place in Veniceon October 28-29.

Two main topics are on the agenda: the growth of European component exports, at the rate of about 75 million a year, and the centrality of Japan on the production front, with 9.28 million motor vehicles and 7.834 million cars produced in 2015. That’s a decline in domestic production from 2014 but still shows rather significant volumes. On a global level, instead, production of Japanese manufacturers continues to grow, in 2015 it reached 8 million cars.
Over the period 2010-2015, production by Japanese automakers rose 12% in Europe, 45% in the U.S. and 85% in Latin America.

Regarding imports, the Japanese market likes sporty brands and luxury Italian cars, with Abarth up by 313.5%, Lamborghini by 86.6%, Ferrari by 28.3% and Maserati by 3%.
“European and Italian components manufactures have maintained close industrial ties with Japanese car makers,” said Roberto Vavassori, head of the European component-makers trade association, “relations that could be additionally reinforced and enhanced with the future approval of the Free Trade Agreement (EPA/FTA) between Europe and Japan. We hope that comes to a conclusion soon to bring the practical benefits associated with lower barriers.”

The trade balance swung from a negative €86 million in 2011 to a positive €82 million in 2015. “Japan,” said ANFIA head Aurelio Nervo, “ is the primary destination in Asia for Made in Italy components. Italian suppliers also provide key components to Japanese systems that operate in Europe and the U.S.”

So it’s a broad-based cooperation, like that of Brembo, a company specialized in braking systems that’s been working in Japan since the 1990s.
“Brembo went into the Japanese market on tiptoes,” said Fabio Casablanca, general manager of the Bergamo-based group, “always focused on excellence. The first collaboration was in the competitive motorbike sector, with Honda and Yamaha. Cars arrived later. The first client was Nissan. With Honda, in particular, we developed a partnership in the U.S. and shortly will start supplying the new NSX.”
Asked about the added value of the Japanese deal, he said: “Strong attention to the processes of innovation applied in the manufacturing sector.”