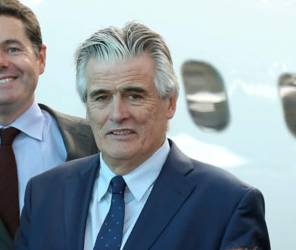 Taranto, il primo parco eolico offshore d’Italia va verso il completamento
How China will impact the world economy in 2017
The global economy we want to create by 2030 – and how we can do it

Dublin-based airline CityJet has this morning confirmed its acquisition of Danish carrier Cimber, a subsidiary of Scandinavian carrier SAS, and placed an order for up to $467m (€434m) worth of Bombardier aircraft.

CityJet has agreed to buy six Bombardier CRJ900 jets and taken an option on four more.

At list prices, the conditional jet order is valued at approximately $280m and could rise to $467m should CityJet exercise all its options.

The Cimber acquisition, which has been anticipated for months, also sees CityJet seal a six-year wet lease contract from SAS to operate regional services from Copenhagen.

CityJet’s current wet lease contract with SAS – where the Irish carrier provides aircraft and crew – will increase from three to six years. CityJet will continue to operate Cimber’s network on behalf of SAS using Cimber’s current fleet of 11 CRJ900s.

The new Bombardier aircraft ordered by CityJet, whose executive chairman is founder Pat Byrne, will also be used for wet lease services with SAS, and also to replace existing Cimber aircraft this year and in 2018.

CityJet’s total CRJ900 fleet – including those in service with Cimber – will increase to 23 this summer. The entire CRJ900 fleet is operated exclusively on behalf of SAS, with all aircraft in SAS livery and crewed by CityJet staff.

“This new SAS contract and the growth delivered by the acquisition of Cimber advances CityJet’s stated strategy of building its role as a provider of regional jet capacity to airlines across Europe and follows our successful inauguration of services on behalf of SAS in March 2016,” said Mr Byrne.

CityJet secured a contract with SAS in 2015 to operate short-haul services using former SAS subsidiary Blue1, which the Irish airline bought as part of the deal.

Rickard Gustafson, SAS’s president and chief executive said that CityJet is one of the Scandinavian carrier’s “key strategic partners” on regional traffic.

“The agreement allows us to fly more routes and maintain a large network with frequent departures,” he said. “Thanks to the synergies between CityJet and Cimber, we expect to lower the costs of production, which is a prerequisite for us to maintain and develop regional routes for the benefit of our customers.”

CityJet had tried to buy Dublin-based airline Stobart Air last year, but the deal fell through in December. Stobart Air operates the Aer Lingus Regional service and flies services on behalf of Flybe.