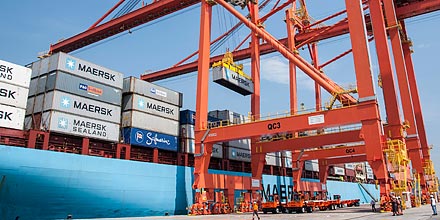 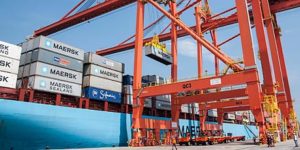 The Philippine’s largest port operator expects new terminals in Australia, Congo, Colombia and Iraq to increase the cargo it handles, boosting profit in the next five years amid a slump in global trade and limited opportunities for investment.
“I don’t really see any light at the end of the tunnel yet” for the global economy, International Container Terminal Services Inc. Chairman and President Enrique Razon, 56, said in an interview on Sept. 16 in Manila. “These four new terminals are our spark plug for growth.”
ICTSI, which operates in more than 20 countries, saw revenue from port operations rise 11 percent to $284.3 million in the second quarter as expansion in recent years boosted volume, countering sluggish trade.
The World Trade Organization in April cut its trade growth forecast to 2.8 percent from 3.9 percent for this year on slowing Chinese economic growth, increased market volatility and foreign-exchange fluctuations. Hanjin Shipping Co., South Korea’s biggest container shipper, applied for court protection in Seoul last month, adding to shipping lines worldwide that have been forced to sell assets and cut jobs.

Investment Drought
ICTSI shares have dropped about 10 percent from this year’s peak in August, trimming its 2016 gain to 8.4 percent. The benchmark Philippine stock index has climbed 8.6 percent.
Capital spending will “taper off dramatically” from this year’s $420 million as greenfield projects are completed, and the budget for 2018 and 2019 will be “very small” compared to previous years, said Razon, whose net worth was estimated at $3.1 billion as of September 16, according to the Bloomberg Billionaires Index.
ICTSI is looking at Iran, Indonesia and possibly Myanmar for opportunities to invest while there’s a “dry spell” in port privatization globally, Razon said.
The company will start commercial operations of its A$550 million ($412 million) terminal in Melbourne, $545 million Colombia venture, $130 million terminal in Iraq and $100 million facility in Congo this year.
Outside of ICTSI, Razon said he will take a serious look at a 74.6 billion-peso ($1.5 billion) project to upgrade Manila’s airport, which will be tendered out by government under a public-private partnership arrangement.
(Razon looks to Iran, Indonesia as dry spell hits port privatization globally.)