Another stage on the journey to battery-powered planes 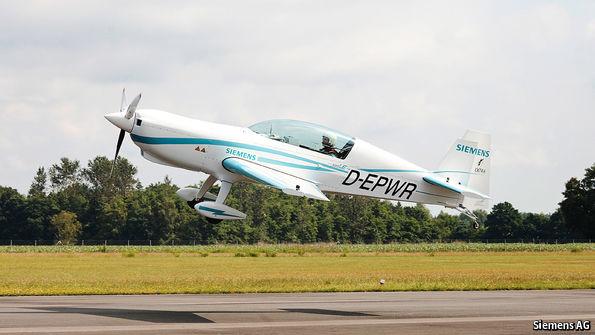 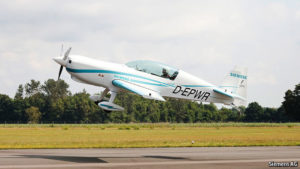 THIS aeroplane may not look special, but it is. Its airframe is that of a 330L, an aerobatic craft built by Extra Flugzeugbau of Dinslaken, Germany. It is propelled, though, by an electric motor built by another German company, Siemens.

Electric aircraft are, as it were, in the air—with projects like the Solar Impulse, a sun-powered plane about to complete a round-the-world flight, and Antares, a motorised glider. But the 330LE, as it is dubbed, is the first to have an airframe already certified for sale and also the first (other than motorised gliders) to use an electric engine its makers plan to have certified as well. The 330LE’s initial public outing, on July 4th, was thus a step forward for the field.

The motor itself weighs a mere 50kg. That compares with 201kg for the 9,550cc, six-cylinder device a 330L normally sports. Batteries are not included, however, and that makes a bit of a difference—for the batteries required weigh 150kg each, and two are needed. One sits conveniently in the liberated space in the engine compartment, but the second has to be strapped to the co-pilot’s seat. For this and other reasons, the plane’s pilot (and Extra Flugzeugbau’s founder), Walter Extra, did not attempt any of the fancy aerobatics for which the 330L is renowned on his ten-minute proving flight.

The limited duration of Mr Extra’s flight was determined by a need not to drain the batteries—which, combined, have only about 20 minutes’ worth of juice in them. But that does not bother Siemens. Battery technology is improving rapidly and Frank Anton, head of the firm’s eAircraft programme, believes it will quickly become powerful enough to sustain Siemens’s ambition to build, by 2030 and in collaboration with Airbus, a pan-European company, a hybrid-electric regional aircraft with 60-100 seats.

Depending on how the power used to charge the batteries is generated, such a craft could help reduce carbon-dioxide emissions. A more certain environmental benefit, though, would accrue to those living near airports—for one particularly desirable feature of electric motors is that they are almost silent.