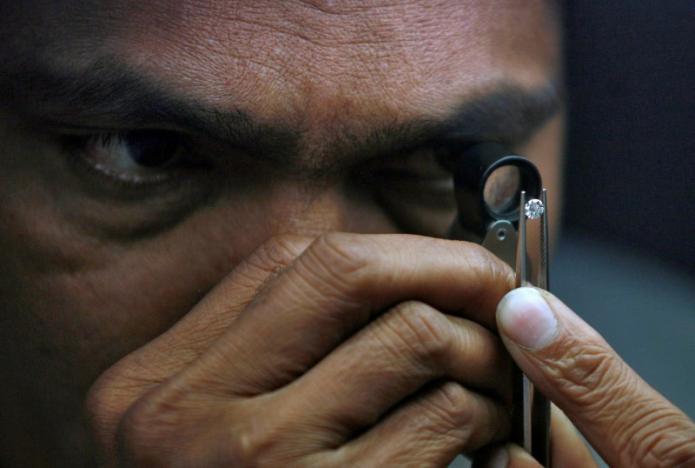 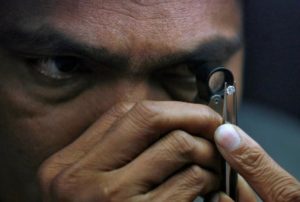 A supervisor checks the shape of a polished diamond inside the diamond processing unit at Surat, in the western Indian state of Gujarat

The global diamond industry is facing disruption that could stretch through the first few months of next year, including Valentine’s Day in February, as a result of Indian Prime Minister Narendra Modi’s radical move to abolish most of the nation’s cash overnight.

In the western Indian city of Surat craftsmen usually spend 10-12 hours a day in small mills or grimy sheds cutting and polishing 80 percent of the world’s diamonds but the business is based on cash and the demonetization of the high-value banknotes from Nov. 8 has prevented many from operating. Thousands of diamond brokers in the area’s narrow lanes are also doing little business.

The lack of cash is not the only problem for an industry that employs 1 million people in India, most of them in this city. Modi’s shock treatment is intended to make it much more difficult for those laundering ill-gotten gains or evading taxes, and that means diamond buyers are demanding proof of tax payments that are often not available, the traders said.

The picture for retailers and consumers of diamonds is less clear. The cash crunch has also badly hurt consumer demand for diamond jewelry in India, the world’s third-biggest market.

That means there are more of the cheaper finished stones to export, helping to create a temporary glut and lower prices at wholesaler and store level. However, that may not last if the cutters and polishers of India can’t get back to work soon.

But the luxury buyer doesn’t have to worry. Much of the higher-value jewelry business, with the highest grade one-carat stones usually costing more than $14,500, is protected because cutting and polishing is also done in Israel, Belgium and by bigger Indian companies that rely on bank transactions.

“The knock-on effect of Indian demonetizations has meant a reduction in the prices of lower quality diamonds,” said Tobias Kormind, managing director of 77 Diamonds, an online jewelry retailer based in London. “As a result, we’ve seen an increase in demand for those kinds of diamonds as our clients have snapped up these favorable deals.”

In India, jewelry demand typically climbs in the winter months’ wedding season. But this year sales are plunging as nearly two-thirds of jewelry is usually purchased with cash, which is in short-supply.

Ishu Datwani, owner of Mumbai-based Anmol Jewellers, says his sales are down nearly 70 percent since the government scrapped the high-value notes.

The demand is unlikely to revive any time soon as India struggles to dispense enough new notes, industry officials say.

“During the cash crunch, diamonds are one of the last things people want to buy. At least for the next six months demand will remain weak,” says Praveenshankar Pandya, head of India’s Gem & Jewellery Export Promotion Council (GJEPC).

The crisis hit at a time when there were plenty of stones in the retail pipeline or being processed. India’s rough diamond imports between April and November jumped 30.5 percent, while exports of cut and polished diamonds during the period rose 12.2 percent, GJEPC data shows.

In trading hubs like Hong Kong, many retailers are stuck holding diamonds they bought three years back at higher prices expecting robust demand from China that didn’t materialize.

“There has been no supply crunch as the market is already flooded, especially the low carat diamond,” said Jonathan Rotbart, a distributor of gems in Hong Kong.

“SHOCK TO THE MARKET”

“The market is frozen. We don’t have cash to buy diamonds,” said Kalpesh Savaliya, a trader for 25 years who was sitting cross-legged on a mattress behind a low wooden desk in Surat.

Miners are already feeling the pain with some lower-quality stones being discounted by more than 25 percent from prices before demonetization, said Panmure Gordon analyst Kieron Hodgson, in a recent note to clients.

In its final 2016 tender, De Beers said sales were affected by a slowdown in lower-value rough stones, a trend Hodgson expects to see repeated for at least the next three months.

Dominion Diamond, with stakes in two Canadian mines, expects its sales in its fourth quarter ending Jan. 31 will be hurt by the Indian cash crisis, and sees weaker demand for small stones extending to its fiscal first quarter. Demonetization was a “shock to the market,” said Chief Executive Brendan Bell.

Stornoway, which this year finished building Quebec’s first diamond mine, withdrew smaller, lower-quality stones from its first-ever tender in November due to poor demand and prices.

But Mountain Province Diamonds (MPV.TO), which owns 49 percent of Canada’s newest diamond mine, Gahcho Kue, indicated it isn’t overly worried. “Small diamonds are roughly 80 percent of your production and 20 percent of your revenue – and the demand for the large diamonds remains robust,” said CEO Patrick Evans.

“The diamond market is fine. Average prices are up 7 to 9 percent this year, but small diamonds are down about 50 percent ”