Opium cultivation and its trafficking are some of the most salient socio-economic problems globally. It usually leads to a health crisis, a high crime rate, and trafficking. Several factors are involved in the cultivation of opium in Afghanistan, such as the dependency of farmers on opium excessively, political instability, high level of corruption, lack of economic support, lack of law enforcement, and security conditions. Due to recent economic shock from Covid-19, opium cultivation increased to 224000 hectares, a 37% rise from 2019. Wage payments during the pandemic have been a reliable source of income for opium lancers. The fall of the Afghan government has led to the loss of jobs and livelihoods and forced many to flee to rural areas or provinces. Lack of employment in urban areas, absence of aid and government support, and closure of labor-intensive companies are expected to increase opium cultivation in the following year and subsequently increase opium trafficking through different routes such as Central Asia and the Middle East. 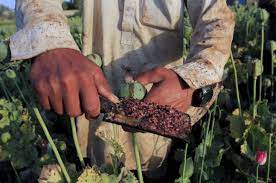 With the fall of the Afghan government on 15th August 2021, the circumstances for ordinary Afghan citizens have changed significantly. While many Afghans who were affiliated with the international community have been evacuated, ordinary Afghans are bearing the brunt of political and economic turmoil. With the takeover of the Afghan government by the Taliban, the U.S. and other allies of the fallen government have blocked access to the funds, which were to be spent on as part of budget or development projects in Afghanistan. With the fall of the Afghan government, unemployment has risen to unprecedented levels, and more than 98 percent of Afghans are expected to fall below the poverty line, according to UN estimates.

A severe economic collapse can not only cause social unrest and make a living a struggle for ordinary Afghans but also can bring significant challenges for the region, EU, and ultimately to the world. A severe economic collapse can lead to mass unemployment in Afghanistan, malnourishment, a high level of poverty, an increase in opium production, and many other social and economic problems. Economic challenges will lead to a chain of challenges for the region and beyond by increased level of refugees to the region and beyond, opium trafficking to the EU countries. Hence, it is vital to be concerned about the economic collapse in Afghanistan and address the challenges before being late.

This article studies the effect of economic collapse due to the fall of the Afghan government on 15th August 2021 on opium production and its trafficking. The first part of this article elaborates on the determinants of opium cultivation in Afghanistan, trends on opium cultivation in the last two decades, opium and its derivates trafficking, support of Taliban to opium production during their insurgency, how farmers have reacted to economic shocks, and how they might react to a current economic shock and finally how this might trigger a surge in the trafficking of opium to the region and beyond. The last part of this article proposes policy guidelines to reduce the effects of economic shock and prevent further collapse of the Afghan economy and plunge of Afghans to extreme poverty.

How an increase in opium production and trafficking can affect the Afghan economy and regions? And how the Taliban might react?

Several factors are involved in the cultivation of opium in Afghanistan, such as the dependency of farmers on opium excessively, political instability, high level of corruption, lack of law enrollment, security conditions, absence of financial support, social protection by the state, unregular income to farmers from other sources, security conditions, and droughts. These factors have led to massive production and trafficking of opium, cocaine, heroin from producing countries especially Afghanistan to consuming countries through different routes. Governments have usually been seizing many tons of such drugs before it reaches their destination, however, measures have not been effective in maintaining opium production and trafficking. Opium forms a very huge part of unaccounted GDP in the country. Opium not only benefits farmers, but also provides thousands of jobs for local migrants seeking labor work in the fields. For instance, in 2017, there were approximately 354,000 full-time jobs as harvest-collector and other types of jobs were created by opium cultivation in the Afghanistan. With the fall of Afghan government, many has lost jobs and have either fled the country or migrated from urban center to rural areas. historically, Afghan farmers have relied on opium production during economic shocks, as recently with Covid-19 pandemic, many started cultivating opium, which increased opium production levels by 37 percent from 163,000 hectares in 2019 to 224,000 hectares in 2020. With similar economic hardships brought by fall of Afghan government and economic collapse, it is safe to assume that opium production will increase if an immediate intervention is not occurred.

Current trends in the opium cultivation in Afghanistan

A surge in opium production occurred from 2006 to 2008 due to insurgency in distant places such as southern provinces, where Taliban strongholds are situated. The second wave of opium planting occurred in 2014, when western soldiers began to withdraw from Afghanistan. Growth in southern and western areas may be attributed to proximity to trafficking routes. After deducting domestic and bordering countries opium usage, 5000-5300 tons of opium (250-300 tons of pure heroin) were available for trafficking in 2018.

History of opium production and its importance for Afghanistan

Growth and trafficking of opium have not only corrupted government officials and police, but have also destabilized the political and economic circumstances in the nation. This enabled warlords and opium trafficking mafias to infiltrate the government, according to a US Institute of Peace assessment.

After the Soviet invasion of Afghanistan, farmers began cultivating opium due to external forces and difficulties created by the war. According to a New York Times article, farmers devastated by conflict chose to cultivate opium instead of conventional crops that were sold for much less. As a result of the Soviets destroying millions of acres of farmland, many Afghans moved to Pakistan and Iran, reducing agricultural activity and increasing opium production from 140 tons in 1984 to 400 tons in 1985, according to the US National Narcotics Intelligence Consumers Committee study.  They encouraged opium growing to reduce Afghanistan’s reliance on international military assistance, which has since become a significant source of money for the Taliban.

The decrease in cultivated hectares in 2018 compared to 2017 did not influence demand for opium and its derivatives. Thus, it is still widely trafficked through various routes to global markets. Figure 1 shows several routes for supplying Afghan opium and heroin to worldwide markets. To get to Eurasian area and Russia, most opium and heroin is trafficked via Tajikistan and Turkmenistan, with Uzbekistan having the strictest border security with Afghanistan.

Effect of Covid 19 on opium production and trafficking

The drug mafia’s capacity to smuggle opium heroin and morphine to worldwide markets is contested. Following international travel restrictions, Iranian police describe a change in trafficking routes from land to water after lockdowns. Organized groups’ techniques have changed, opting to move opium and heroin from Afghanistan to the Indian Ocean, Africa, and Europe through waters. While lockdowns have a short-term impact on drug trafficking, the drug mafia may adapt to changing circumstances and avoid a decline in trafficking. Despite the widespread of Covid 19 in western and southern areas, opium trafficking has not been seriously curtailed. Thus, heroin trafficking has not been impacted in nations where it is transported by land or sea.

The fall of the Afghan government led to economic, social, and political turmoil, which led to sanctions on Afghan banks, the exodus of allied countries and international donors and organizations, and internal displacement. The political vacuum led to uncertainty in the markets and abrupt interference to commercial activities across the whole provinces, which forced many companies to exit their capital from Taliban-controlled uncertain Afghanistan. As mentioned, during times of crisis opium cultivation has been a primary source of revenue for Afghan farmers, and considering the recent increasing trend, it is expected to have more opium cultivated this year. Even with the recent ban on opium production by the Taliban in April 2022, the likelihood of farmers choosing to cultivate opium is very high due to the economic shock experienced by not just farmers but also others who are involved in its processing, and trade or trafficking. Several factors can influence the enforcement of such a national and abrupt ban on opium production. Lack of enforcement in rural areas, risk of infuriating the population in southern provinces, lack of economic support to farmers, and influence of the drug mafia in local politics are some of the factors that will impede the implementation of the ban.