The role of Kenya in the maritime silk road

If you ask Kenyan people if the Chinese are improving life in the country, the ones that answer positively will refer to the huge number of roads being built by Chinese companies. Consistently with the pattern of action adopted by China in Africa, Beijing’s most important contribution to Kenya’s economic development has been delivered through investments in the infrastructure sector. 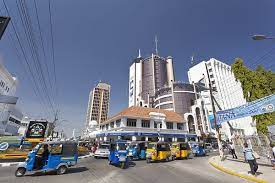 The Chinese engagement in the infrastructure development of Kenya is projected to increase even further with the Maritime Silk Road (MSR), which is part of the ambitious Belt and Road Initiative (BRI) and finds Kenya a crucial spot for accessing Africa. The MSR is expected to bring into the country huge infrastructural investments for further improving and modernizing railways and constructing pipelines and ports. The benefits should be increasing Kenyan exports to neighboring African countries and providing Kenya with better access to Chinese and European markets.

According to James Ndegwa, Deputy CEO of Kenya National Chamber of Commerce and Industry, “Kenya seeks to position itself as the gateway to east and central Africa while at the same time position itself as a point of exit for all products destined to Asia and Europe through the port of Mombasa”. The port of Mombasa is at the very core of the involvement of Kenya in the MSR. The Standard Gauge Railway (SGR), even if started before the involvement of Kenya in the MSR, represents today the emblematic project of the Chinese initiative. In addition to its practical utility, the SGR has a symbolic meaning, replacing a railway built by Great Britain during the colonial period. It will be the largest infrastructure investment in the country since its independence and will be built in different phases. The first part, which opened for business in 2017 links the port of Mombasa to the capital city of Nairobi, reducing substantially the time needed to travel between the two targets. In the other phases, the SGR will seek to connect Kenya with other African countries, such as Uganda and Rwanda. The Standard Gauge Railroad is an incredibly large and expensive project, which will cost billions of dollars, and so it will also imply many positive externalities for Kenya’s economy. The capital will be used to buy materials, and hire local workers, which is a way to reinvest the capital into the market and stimulate the economy. It will be a way to strengthen the purchasing power of material suppliers and workers, encouraging the vitality of other industries.

If on one side the project represents an important opportunity for Kenya to modernize its infrastructures, increase exports to its regional partners and create new jobs, it has raised concerns about its sustainability. The first part of the project that has already started to work costs $3.2 billion, with 90% of it funded by the Export-Import Bank of China and developed by China Road and Bridge Corporation. Kenya was already facing a tough public debt condition and so the project has raised many concerns related to the potential unsustainable debt distress of Kenya. The risk is that China, which is already the main bilateral creditor of the country, might exploit this condition to acquire more economic and political leverage in Kenya. As a consequence, there are reasons to think that the project might be detrimental to Kenya’s sovereignty, increasing substantially the influence of China in the country. This pattern would be consistent with a broader effort by Beijing to gain more influence among African countries for supporting its interests on the international level. Considering the recent tensions regarding the Taiwan issue, which came back to the forefront, China must have countries supporting its claims, both within the multilateral institutions and with practical actions. In the past Kenya had already supported Beijing in its “One China Policy”; in 2016, for instance, it accepted the request to deport some Taiwan nationals suspected of fraud to Mainland China, demonstrating loyalty to China in its efforts to undermine Taiwan’s claims of independence.

The unequal leverage between the two actors has put Kenya in a vulnerable position. This has also affected the bargaining power of the country concerning the negotiations connected to the MSR, pushing it to accept unfair contracts and leading, in certain cases, to their invalidation by the Kenyan court. In the specific case of the Standard Gauge Railway, the concerns were related to the unclear possibility that the Mombasa port could be seized by Chinese creditors in case of default of payments by Kenya. The SGR presents high costs that might exacerbate the already heavy debt burden of the African country; in the beginning, they were justified by the potentially huge benefits in terms of the GDP growth that should have been associated with it, nonetheless, the revenues resulting after the first year of activity “have been less than half the projections and covered only half of operating costs”.  The project of the MSR has received further criticism because of its environmental and social impact on Kenya. The Kenyan government has been forced to pay millions of dollars to compensate for the resulting damages to the local communities connected to the SGR. This scenario is not new: it is common for China to not completely respect the environmental norms of the countries where projects are built. All these issues have been detrimental for the opinion that local people have about China. According to an analysis by Brendon J. Cannon of student attitudes and elite media reportage in Kenya it has emerged that, in the last years, local people have begun to change their opinion, negatively, about China’s role in Kenya. Around 65% of Kenyan university students who participated in the survey were less favorable toward China in 2020 compared to 2015. This trend is consistent with another survey reported by Afrobarometer in 2021 which shows that 87% of Kenyans interviewed consider that the government has taken too many loans from China and must quickly disengage from this dependence.

It is difficult to state whether the involvement of Kenya in the MSR will lead to more positive or negative results. So far China has substantially contributed to providing Kenya with infrastructures crucial for enhancing economic development. The project represents an additional opportunity for the country to improve its infrastructure asset and exploit the positive externalities related to the Chinese companies’ action in the country. Because of its political stability and its dynamic economy, Kenya is one of the most strategic spots for the MSR, BRI, and more: Beijing has a clear view of the potential of Kenya both as an economic and political partner. Nonetheless, the Chinese growing engagement in the country raises more than one critical issue that is also starting to be perceived by the population. There is a concrete risk for Kenya to fall into an over-dependence on China, and so become vulnerable to economic and political blackmail. Whether the BRI, and specifically the MSR, will result in an opportunity for Kenya or a challenge to its economy, and political independence, will depend mainly on how the country’s institutions will handle and regulate the Chinese investments. Kenya comes from an election round in which China’s engagement in the country has been a widely discussed topic by both presidential candidates. In the end, William Ruto succeeded in becoming the new president of Kenya, carrying out a very critical campaign with respect to China, consistently with the shared sentiment of concern expressed by a substantial part of the population. The new elected President promised a departure from the China-friendly government of outgoing President Uhuru Kenyatta, accused of abetting state capture. He claimed he will take far-reaching measures to address the situation, by reviewing existing loan contracts and agreements to ease the country’s rising debt burden and by publishing the contracts with China.

Beijing is watching carefully the situation in Kenya. Concerning the future of the BRI in the country, much will depend on whether the newly elected president will carry on the critical attitude shown toward China during the election campaign or whether it will instead ease up, maintaining the status quo set by his predecessor, which implies continuing the BRI projects with the support of the Chinese government.