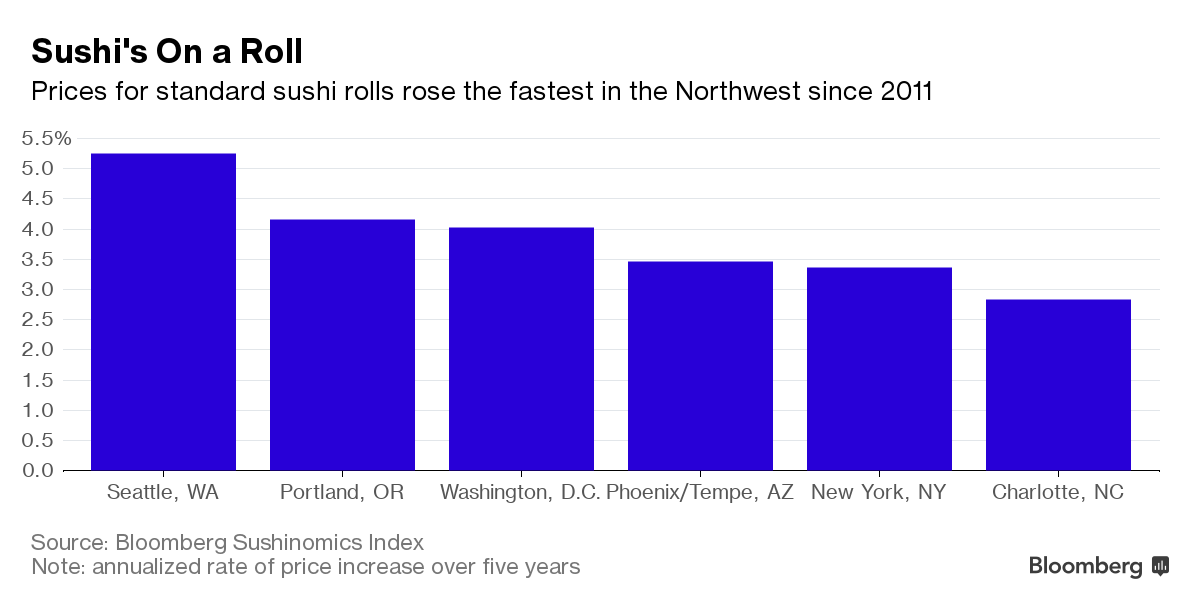 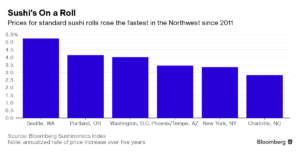 It is a truth universally acknowledged that a millennial in possession of a decent salary, must be in want of an affordable piece of sushi. That, however, is increasingly hard to come by.

Bloomberg’s Sushinomics Cost-of-Living Index has tracked the price of the standard spicy tuna and California rolls in major metropolitan areas over five years, including the 2012 and this year’s election cycle. The biggest price surges were in Seattle, Portland and Washington, D.C.– destinations of choice for young graduates and professionals.

The cost of sushi, which has gone from an exotic treat to a grab-and-go lunch for middle class young adults, is an informal way to measure the spending power of a demographic that has overtaken the Baby Boomers as the largest living generation that can vote. In the same vein of the Big Mac Index, Sushinomics uses a popular food item to offer a peek into the socio-economic landscape at a time when concerns loom large about income inequality, affordability and stagnant wages in the U.S.

Sushi prices on the rise–driven by factors including customer demand, the labor market and cost of supply of raw fish–is “a reflection of a younger generation moving up the corporate ranks in the professional world,” said Darren Tristano, president of Technomic, a Chicago-based food research company.  “I don’t think that boomers are driving the sushi trend.”

The cost of the rolls has jumped an annualized 5.3 percent since 2011 in Seattle, which has become a destination for tech grads working for Amazon.com and Microsoft, while arts-savvy Portland has seen prices increase by 4.2 percent. In Washington, where neighborhoods are gentrifying, the cost is up by 4 percent. The average prices of basic sushi rolls in all the cities rose 2.2 percent per year in the past five years.

New York and Los Angeles are still the two most expensive places for sushi, with those positions unchanged since the index started in 2011. The average prices of the standard sushi menu items was $8.71 in New York. New Orleans ranked as the cheapest, at $5.33. 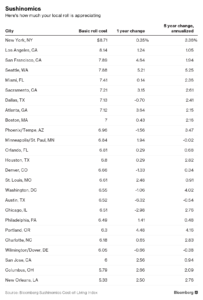