Near a former red-light district around Lisbon’s old Cais do Sodre docks, scores of young entrepreneurs are trying to leave depressing economic times behind and turn Portugal’s capital into a hive for tech startups.

Just a few years after Portugal’s debt crisis and bailout, their aim is to become the next Berlin in generating a cool ‘tech buzz’, offering talented young people and costs way below those in more established European centers.

Already Lisbon has earned the right to host Europe’s biggest tech conference, Web Summit, this month. Now hopes are high that this will accelerate investment in new ventures, and reverse a brain drain of young entrepreneurs following Portugal’s deepest economic slump in 40 years.

Lisbon is a small speck in the universe of Europe’s startup giants like London and Berlin, not least due to an acute shortage of venture capital in the Portuguese economy, which remains slow growing and heavily indebted five years after the EU/IMF bailout.

But as a city on the edge of the European continent, it has ambitions to follow the German capital. Once isolated behind the Iron Curtain, Berlin has blossomed in the past decade thanks to low startup costs and a young workforce drawn by its alternative lifestyle.

“Lisbon is exciting,” said German investor Simon Schaefer, who has decided to build office space for 400 tech workers in the city, hoping to replicate a similar project he founded in Berlin in 2012.

“You see international entrepreneurs thinking ‘where should I go and build a company?’ and you see that Lisbon is on the map,” he told Reuters.

Because the startup sector is so new and most companies remain small, data is still scanty. However, there are signs of rapid growth, albeit from a low base, including plans to create office spaces for up to 3,500 tech workers.

Also, when the government offered to co-finance startups this summer, venture capitalists pledged over 500 million euros ($550 million). The government is still evaluating the proposals and it is unclear how many will bear fruit, but the sum far surpassed official expectations. 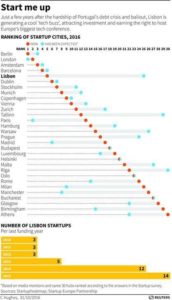 RUNNING FOR THEIR LIVES

When the slump hit, unemployment surged and thousands headed abroad – as Portuguese have long done whenever hardship hits one of western Europe’s poorest countries.

Portugal did not lack the expertise and energy to create tech startups, but the capital shortage meant that talent had to head abroad in search of funding.

“Some emigrated and some others just ran for their lives to start a company,” said Alexandre Barbosa, managing director at Faber Ventures, which he founded in 2012 and is one of a few firms dedicated to investing in tech startups in Portugal.

Another company – Seedrs – which was co-founded by Portuguese entrepreneur Carlos Silva in the British capital, is Europe’s largest online crowdfunding firm.

However, the outflow is beginning to bring benefits: both Farfetch and Seedrs now have large operations back in Portugal.

Investors willing to take the plunge are finding they can hire talented engineers who speak English, the language of tech startups, at relatively low cost. Wages in Lisbon are roughly a third of those in Berlin, which itself offered lower costs than wealthier German cities to the west such as Munich or Hamburg.

According to Eurostat figures, the estimated hourly labor cost in Portugal in 2015 was 13.2 euros, compared with a European Union average of 25 euros and 32.2 euros in Germany.

The same goes for accommodating the bright young people. Monthly rents for prime Lisbon offices averaged 18.50 euros per square meter in 2014, compared with 66 euros in Paris, according to real estate firm Cushman & Wakefield.

Prime Lisbon prices are only a little lower than the 22 euros in Berlin, but startups are avoiding the center in favor of cheap, former industrial neighborhoods along the Tagus River.

This is starting to show up in official data such as new company registrations in Portugal, which rose sharply to 35,555 last year from 29,216 in 2012.

Lisbon has jumped on the trend by launching a number of incubators and business accelerators, operations that foster new companies. Lisbon’s easygoing life-style and historic charm, which has ignited a tourist boom, have added to the mix.

A study by the European Startup Initiative, a nonprofit organization, found this year that Lisbon is Europe’s fifth most attractive startup hub, after Berlin, London, Amsterdam and Barcelona. The findings were based on responses from 689 startup founders who were asked where they would move to found their companies, if they could start again.

Anthony Douglas, who is half Portuguese, is one tech founder who braved the recession and started a business six years ago. He created a golfing app called Hole19 which now has one million users in 172 countries.

He found his startup capital lasted longer in the period before revenue began flowing. “You can build a product, build a company, at a lower burn rate than you would in any other country, with talented people, everyone speaks English,” he said, adding that he has 30 staff, with an average age of 26.

Douglas, who is launching a second funding round to expand, hopes to have revenues of $100 million in three to five years.

About 500 companies have gone through training programs at Beta-i, a Lisbon-based business accelerator, in the past few years. Those new firms received a total of 60 million euros in funding.

A Microsoft-backed study identified 40 Portuguese ‘scale ups’ – companies that have raised at least 1 million euros in funding – over the past five years. They raised a total of 166 million euros, although this is far behind neighboring Spain which had 106 scaleups that raised $1.6 billion and Germany’s 208 companies that attracted $6.6 billion in investment.

ONE IN TWO JOBS

There are no estimates yet of how big the impact of startups could be on Portugal’s economy, but the Socialist government is throwing resources at them now for a simple reason: they create masses of jobs. For instance, about half of Farfetch’s 1,000 staff work in Portugal; its current job listings have 140 openings, 81 of which are at home.

“We want to embrace startups, not just because one in two new jobs now being created are by companies younger than five years, but because they bring innovation to traditional sectors of the economy,” said industry secretary Joao Vasconcelos, who previously headed one of Lisbon’s main incubators.

Vasconcelos said his priority is to help startups to thrive by attracting foreign funding through incentives and the right regulation. Government measures include tax breaks of up to 100,000 euros for investments in the sector.

Silva, who moved back to Lisbon to head the Portuguese operation after Seedrs was founded, said the funding situation has begun to change from the days when “Portuguese entrepreneurs would just have to get on a plane to London and raise capital”.

There are also high hopes that some Portuguese engineers who founded companies or work at big tech firms abroad will return and channel their profits into young tech startups at home.

Much is pinned on Lisbon’s success in luring the Web Summit from Dublin, which has hosted the event since it was founded in 2010. “The Web Summit is a great way to showcase to the world what Portugal is all about,” said Schaefer. “It is going to be hugely beneficial to what happens next.”