International trade grew in the second quarter of 2016, according to OECD figures.

This halts two years of declining figures. It’s a rare piece of good news for the global economy, and comes days before the G20 leaders’ summit takes place in China.

Trade among members of the G20, a group of 19 countries and the European Union which represents 85% of global GDP, grew modestly in the second quarter of this year, the first increase since early 2014.

Combined exports in the G20 rose by 1.5% in the second quarter of 2016, after falling for the previous seven quarters. 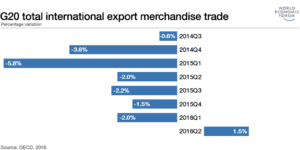 However, there were some marked differences between individual countries. Exports grew in almost all G20 economies except Argentina, Canada and China. India, South Africa and Turkey all registered growth of more than 5%.

Combined imports rose by 2.0%, after eight consecutive quarterly falls. All G20 economies recorded growth in imports in the second quarter of 2016, except Argentina, France, India, Indonesia, and Mexico, who all registered slight falls. Russia’s imports fell by 5.0%.

China recorded the highest growth in imports at 6.6% growth in the second quarter, but levels remain lower than in 2014. 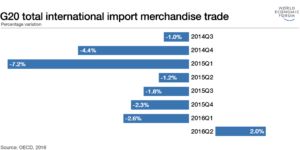 International trade is an important driver of economic and corporate growth. This map shows just how much of that trade is driven by the movement of goods via shipping.

Constructed using 250 million data points, the map, made by data visualization company Kiln, shows the movements of the world’s commercial shipping fleet in 2012.

These tens of thousands of ships, travelling across our seas every day, drive global trade and the economy.

Whilst the international trade figures represent a glimmer of hope for growth in the global economy, they remain significantly below the post-crisis highs seen between 2011 and 2014.

Maintaining the Momentum of World Economic Recovery is a key theme at this year’s G20 summit.

World leaders will gather this weekend in Hangzhou, a city of about 6 million people southwest of Shanghai. It is the first time that China has hosted the event, now in its 11th year.

The G20 Leaders’ process was established after a joint EU-US initiative back in 2008 to tackle the global financial crisis.