Europe and US equity gauges firm 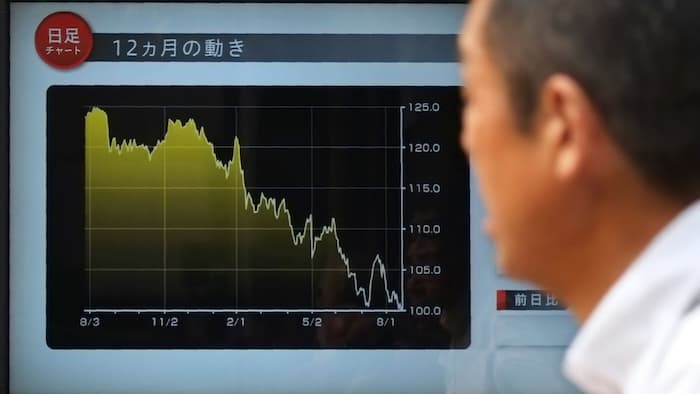 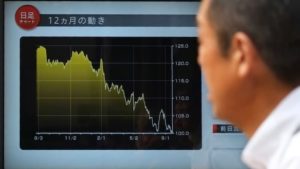 Monday 10:15 BST. The dollar and Treasury yields are firmer, hurting commodity prices but leaving stocks on the front foot, as investors continue to weigh up whether the Federal Reserve will raise interest rates before the end of the year.

After Japanese equities rose but Chinese bourses dipped, the pan-European Stoxx 600 index is starting the week up 0.8 per cent, boosted by big gains for takeover target Syngenta. Index futures suggest the S&P 500 will add 2 points to 2,186, leaving the Wall Street benchmark just 4 points shy of its record close.

Shares in miners and energy groups are under pressure as base metals falter and Brent crude, which last week hit a two-month high on hopes for Opec-agreed production curbs, dips 1.7 per cent to $50.04 a barrel.

Strength in the US dollar (USD) is hurting such buck-denominated assets. “The reversal in the USD is the clear theme of the session,” said analysts at Citi.

The dollar index, which tracks the greenback against a basket of its peers, is up 0.2 per cent to 94.71 as traders price in a slightly greater chance that the Fed will raise interest rates in coming months.

On Sunday, Stanley Fischer, the vice-chairman of the Fed’s Board of Governors, said core inflation was within “hailing distance” of the Fed’s 2 per cent price target, a comment regarded as hawkish for interest rates.

Following a dovish set of Fed minutes but other generally more hawkish Fed official commentary of late, analysts at Bank of America Merrill Lynch surmised that a rate rise this year “was likely, but the pace of tightening would be very slow and the Fed might overshoot its inflation target”.

BofA added: “The market is overpricing a September rise but may be underpricing a December rise. The Fed miscommunication reinforced the dollar sell-off. The market is far from the stretched long dollar position of a year ago. If the Fed starts rising again in December, investors will have a lot of catching up to do.”

The outlook for monetary policy will remain in focus ahead of Fed chair Janet Yellen’s speech to the annual central banker symposium in Jackson Hole, Wyoming, that begins on Thursday. 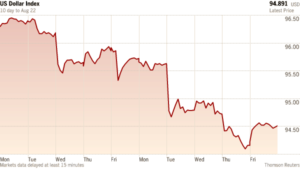 Building expectations of tighter Fed policy are pushing down US government bond prices and nudging up yields. The 2-year US note yield, which is particularly sensitive to monetary policy expectations, is up 2 basis points to 0.77 per cent, flirting with its highest levels since the UK’s Brexit vote.

Ten-year Treasury yields, which just over six weeks ago touched a record low of 1.32 per cent, are up 1bp to 1.59 per cent. Equivalent maturity German Bunds are down 2bp to minus 0.05 per cent, however, as the European Central Bank continues its asset purchase programme. 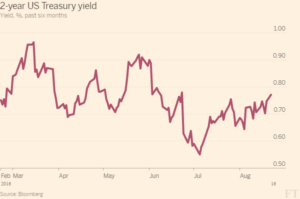 Last week the yen strengthened below ¥100 per dollar, prompting Japanese government officials to remark that they were “closely watching” moves in the foreign exchange market.

Data from the US Commodity Futures Trading Commission show hedge funds remain bullish on the yen, and increased their net long positions on the currency by $700m to $5.3bn last week, noted ANZ Banking Group.

But the softer yen on Monday was deemed good news for the exporter-sensitive Japanese stock market, with the Nikkei 225 average gaining 0.3 per cent in an otherwise generally downbeat regional performance. 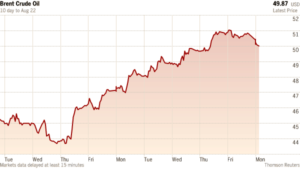 Australia’s S&P/ASX 200 was 0.2 per cent lower, while the Hang Seng was up 0.3 per cent in Hong Kong, where the exchange operator introduced a circuit breaker for stocks in the territory aimed at preventing extreme volatility.

On the Chinese mainland, the Shanghai Composite fell 0.75 per cent and the tech-focused Shenzhen Composite was 1.3 per cent lower, with analysts citing a spot of profit-taking after a good run in August.

Gold, which is sensitive to a stronger dollar and rising interest rate expectations, is down $8 to $1,333 an ounce.