Nancy Pelosi re-elected Speaker of the House in tight race 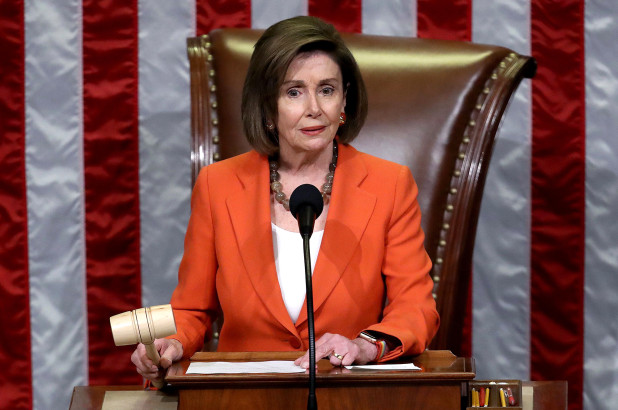 Nancy Pelosi won another term as Speaker of the House of Representatives on Sunday, eking out a close vote as the 117th Congress kicked off.

The California Democrat, 80, will hold the position for a second consecutive two-year term and fourth overall, having previously been elected in 2007, 2009 and 2019.

She emerged victorious with 216 votes to the 209 votes of Republican challenger Kevin McCarthy, also of California.

Two votes were cast for other candidates and three lawmakers voted present.

Pelosi was expected to come out on top, though by a narrow margin reflective of Republican gains in the House during the most recent election cycle and a Democratic party increasingly splintered along moderate and far-left lines.

Representatives could cast a vote for anyone — not limited to Pelosi or McCarthy, or even a lawmaker — declare themselves present, or decline to vote at all.

Despite the defections, Pelosi reached the simple majority of all votes cast for named candidates needed to clinch another run as House Speaker.

McCarthy did not see any Republican defections.

The representatives voted in small, staggered groups to help facilitate social distancing amid the coronavirus pandemic, lawmakers were required to wear masks and breaks were scheduled in the House proceedings throughout the day to allow for cleanings.

Four hundred and thirty of the chamber’s 433 currently-elected lawmakers were in attendance Sunday on Capitol Hill.

Biden Isn't Planning to Share Covid-19 Vaccines With Mexico
The Biden administration isn’t considering sharing its Covid-19 vaccine supply with Mexico, White House press secretary Jen Psaki said ahead ...
Father and Son Accused of Helping Ghosn Escape Are Taken to Japan
Michael Taylor and Peter Taylor haven’t denied helping the former Nissan Motor chairman escape, but they say they don’t think ...
Covid-19 Vaccine Program in U.K. Cut Deaths, Hospitalizations
One dose reduced the risk of hospitalization among people over 70 years old by 80{790ef8ddcccfe09cce26f85682ec54e0671adc5843d2ea67046daa2db126103f} compared with those of a ...
Former French President Sarkozy Convicted in Corruption Trial
Nicolas Sarkozy was found guilty of trying to bribe a magistrate, becoming the first president in the history of France’s ...
In Nigeria's Largest-Ever Kidnapping of Schoolgirls, Gunfire, Screams, Anguish
Days after 317 girls were taken by gunmen from a school, some of those who managed to escape described how ...
Myanmar's Aung San Suu Kyi Faces New Charges
The country’s most popular political leader, who was ousted in a military coup, is entangled in a web of legal ...