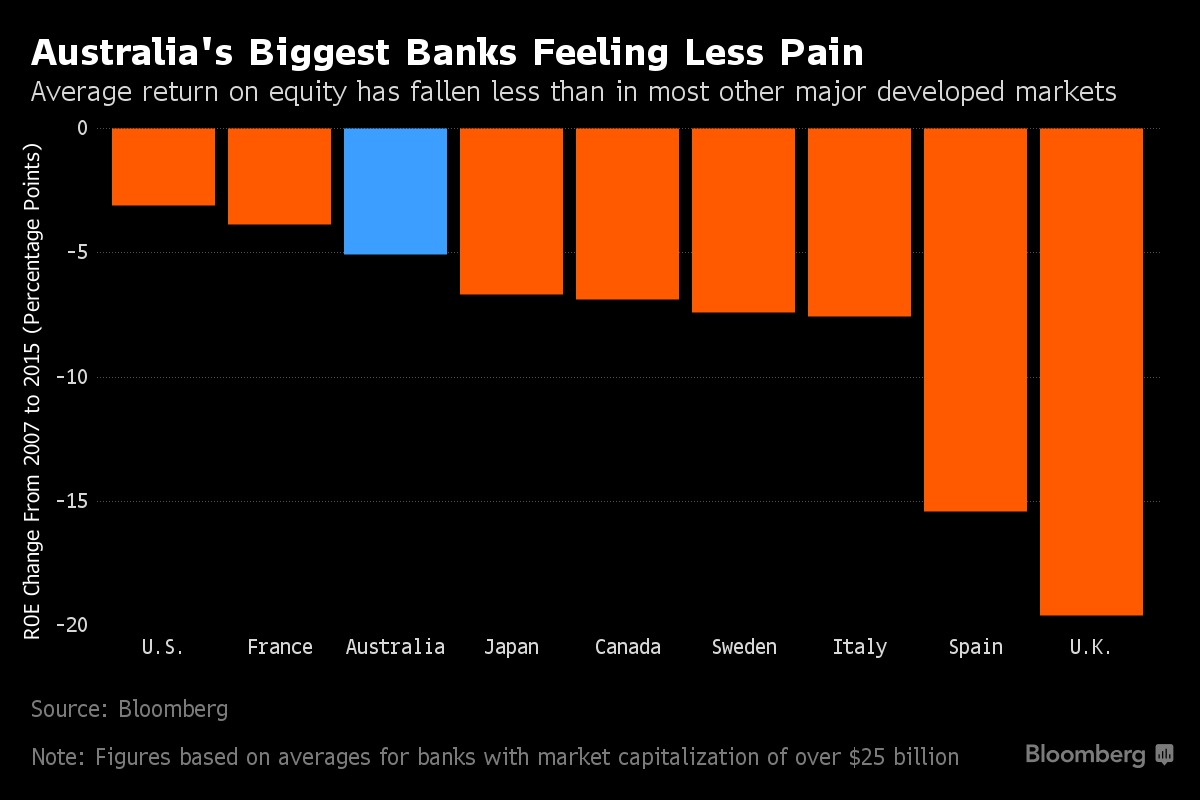 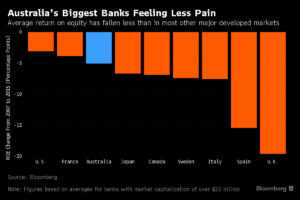 Australia’s big four bank chiefs have spent this week defending their profits to lawmakers by arguing their return on equity has slumped since the financial crisis. On that measure, however, they are still among the best in the world.

In 2015, the Aussie banks posted an average return on equity of 15.2 percent, behind only Canadian lenders in developed markets, according to data compiled by Bloomberg. And since the financial crisis hit, only U.S. and French banks saw their ROE fall less than the 5 percentage-point drop suffered by Australian lenders, the data showed.

The decline in ROE was a common lament as the heads of Commonwealth Bank of Australia, Westpac Banking Corp., Australia & New Zealand Banking Group Ltd. and National Australia Bank Ltd. fronted lawmakers for more than 12 hours in Canberra this week. The hearings were called after the banks failed to pass on in its entirety a quarter-point interest rate cut by the central bank in August, adding to public disquiet over the provision of misleading financial advice, record profits and excessive fees.

Westpac’s ROE has “fallen significantly” from the low twenties before the financial crisis, to about 14 percent now, Chief Executive Officer Brian Hartzer told the committee Thursday. “This level of return is not excessive, but rather is necessary to ensure we are seen as ‘unquestionably strong.’”

It was a theme set by the first CEO to testify, Commonwealth Bank’s Ian Narev.

“You can’t have a prosperous economy unless banks are strong,” Narev told the House of Representatives Standing Committee on Economics on Tuesday. “Our profits are at a level that will enable us to keep the confidence of global funders, who play a critical role in our ability to consistently extend credit.”

“We still have pretty strong ROE, but that is a function of how they manage the banks,” said T.S. Lim, a Sydney-based analyst at Bell Potter Securities Ltd. “We have very strong prudential regulation and very strong bank management.”

ANZ Bank’s Shayne Elliott defended the returns Australian lenders make, compared with peers in Europe, saying they spoke to the strength of the industry.

Returns in Europe “are certainly much lower, but this is due to the near failure of their system,” he said. “European banks still struggle to fulfill their role as a provider of credit and a catalyst for economic growth.”

The bank chiefs also fought back against accusations they were profiting at the expense of customers by failing to pass on central bank interest-rate cuts in full.

“We have not been clear enough that our mortgage and other lending products are not, and have never been, directly linked to the cash rate,” National Australia Bank CEO Andrew Thorburn said in his opening remarks Thursday. “Funding costs have fallen overall, but they have not fallen by as much as our lending rates. This has meant a reduction in bank margins.”

ANZ, Commonwealth Bank and Westpac shares all climbed more than 2 percent this week, and National Australia Bank gained 1 percent, outstripping the 0.9 percent gain on the benchmark S&P/ASX 200 index. The S&P/ASX 200 Banks Index has fallen 7.6 percent in 2016, while the broader stock market benchmark has added 3.5 percent.

Prime Minister Malcolm Turnbull, who had his parliamentary majority slashed at elections in July, called the hearings in an attempt to stave off demands by the main opposition Labor party for a more powerful and wide-ranging independent inquiry, known as a Royal Commission, into the finance industry.

The hearings have done little to appease lawmakers calling for a Royal Commission, such as opposition leader Bill Shorten. Greens lawmaker Adam Bandt, a member of the committee quizzing the CEOs, also repeated his demand for a more powerful inquiry.

“It is clear a Royal Commission is the only way we will get the banks to come clean on how much profit they make off the back of home owners and public subsidies,” Bandt said after the first day of hearings.

The big four’s share of Australia’s mortgage market stood at 78 percent as of August, up from 53 percent nine years earlier, according to regulatory data. The lenders benefited from a government guarantee on deposits and term wholesale funding following the collapse of Lehman Brothers Holdings Inc. in 2008.

While the four CEOs all took the opportunity to apologize for previous misdeeds by their banks — including giving misleading financial advice, refusing to pay insurance claims and overcharging customers — the hearings were marked by a lack of new revelations to unsettle investors.

The hearings “just reinforced that we already know what the issues are,” said Steven Munchenberg, chief executive of the Australian Bankers Association. “We don’t need a Royal Commission to find out what the issues are. What we need to be focusing on is fixing the issues.”

Turnbull says the bankers had better get used to traveling to Canberra for more hearings, as the scrutiny by the committee would force them to enact changes.

“It’s not going to be a one-off hearing,” he said Wednesday. “When they go before the committee, they want to be able to get a bouquet rather than a brickbat.”