This is how Brexit would affect British trade

The “Brexiteers” – those who want Britain to leave the European Union – argue that their goal would be virtually cost-free and have no effect on the United Kingdom’s global trade. They are wrong. On June 23, when voters in Britain cast their ballots in the referendum on the question, they need to consider what is actually involved in leaving the EU – and how the free-trade benefits they now enjoy (and take for granted) could be maintained after Brexit. 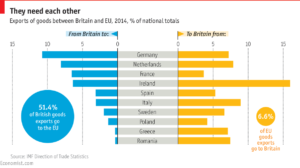 Start with the basics. Leaving the EU means that the UK would exit the EU’s Customs Union, which is the basis for cross-border free trade among the EU’s 28 members (and establishes a common external tariff vis-à-vis third countries). It also means exit from the Single Market – the basis for the free movement of goods and services among EU members. By definition, non-members of the EU cannot belong to the Single Market.

So what would happen next? During the two-year period before Britain’s withdrawal takes final effect, there would be UK-EU negotiations on many points – sovereignty, the legal order, immigration, finances, and economic matters. The assumption is that a crucial goal for Britain would be to negotiate a trading relationship as close as possible to the free-trade relationships that exist today.

That is easier said than done. The best result would be if all players agreed to maintain the free trade already achieved, with the UK setting a new external tariff on a duty-free basis, applicable to all comers. This is what happened in the 1970s after Britain and Denmark left the European Free Trade Association: Free-trade agreements were negotiated among EFTA members and between them and the EU (or the EEC as it was then known).

But Brexiteers should realize that there is no guarantee that this would happen again – and, in any case, there would be complications. While this solution would be good for the 45% of British exports that are sold in EU markets, it would reduce protection for British industries to zero. Under the rules of the World Trade Organization, the same import duties must be applied to all WTO participants – which means that if Britain’s imports from the EU are duty-free, its imports from the rest of the world must be, too.

The alternative would be for UK exporters to accept the EU’s common external tariff, and for the UK to create its own import tariff, applied to all imports, including from the EU. Because the common tariff is at a relatively low level on industrial and fishery products, this might not be an insuperable barrier for UK exports, and it would allow some flexibility in protecting UK companies from imports. The potential pitfall is that any British tariff increase above the EU level would expose the UK to claims for compensation from third countries in the WTO.

The bigger question that the Brexiteers need to answer is how to secure a high level of access to the EU’s internal market. This is vitally important for Britain’s service industries, particularly for the City of London’s exports of financial services.

There is only one precedent for non-EU members being able to negotiate access to the internal market equivalent to that enjoyed by EU members. This is the European Economic Area agreement concluded with the EU by Norway, Iceland, and Liechtenstein in 1992.

In the view of many observers, including me, access to the Single Market through the EEA is no longer available. But what if we’re wrong? The point is that such a deal would go against all the instincts (and rhetoric) of the Brexiteers, because it would mean accepting the EU’s “four freedoms”: not just the free movement of goods, services, and capital – but of people, too. That would be hard to square with the Brexit objective of “controlling our borders.” The Brexiteers would also blanch at Britain’s obligation under an EEA-type agreement to continue contributing to the EU budget.

Of course, there could be specific arrangements for particular sectors. But it seems unlikely that such arrangements would be possible in financial services and the major professional services (including doctors, architects, and lawyers), which are important for Britain’s competitors in Europe. Indeed, it is possible that the EU would adopt a tough mercantilist stance: If you want privileged access, you should stay in the club.

The final consequence of Brexit is that the UK would lose its free-trade arrangements with third countries under the many trade agreements that the EU has signed since 2000. Replacing these agreements with bilateral deals would take time. There is no guarantee that the EU would agree to an interim continuation of free trade, and it seems certain that UK exports would face higher tariffs than its former EU partners in those third countries (placing British exporters at a competitive disadvantage).

It’s a big stretch for the Brexiteers to ask us to believe that the world’s most prominent leaders, European or not, have all got the impact of Brexit wrong. In the trade debate, we have had the International Monetary Fund, US President Barack Obama, and the OECD – quite apart from the UK Treasury – telling Britons that a vote to leave would be bad for the economy. It is not much of a reply to argue that the OECD is “in the pay of the EU” or that Obama is anti-British because he had a Kenyan father in British colonial days.

Economic forecasting is an uncertain science. But when almost all projections point in the same direction – that Brexit would be hugely damaging to the UK – it is time to decide what is credible and what is not.