The ozone hole is closing? 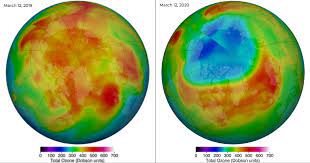 An agreement of the 1987 has bandit the use of the chloroflurocarbons, thaks to the battle of the ambientalists, that this substance was diparded in the environment, and it could reduce the ozone at high altitudes.

The ozone at the high altitude absorbs  a part of the solat radation , because the solar is carcinogenic, even if it is hated to the ambientalist, without thinking the consequence, because the sun can increase the risk the melonoma to the skin, a tumour that only in Italy can hit, at least a millions of person a year.

The scientists demostrate that, the vitamin D and the cholesterol have the same precursor, and the scientists have discovered that in the patient victims of heart attacks, that the concentration of vitamin D is more inferior to the normal, and is more high the cholesrerol.