In its latest effort to showcase clean energy projects, the Land Art Generator Initiative (LAGI) has announced a new exhibition at the Lighthouse in Glasgow, Scotland. On display at LAGI Glasgow will be a series of designs for a proposed renewable energy project targeted for the banks of two intersecting canals in the city in the Port Dundas area. The creations were developed collaboratively by agencies in Scotland as well as from other countries, demonstrating something of a global partnership in support of renewable energy projects—with a certain aesthetic flair, of course. 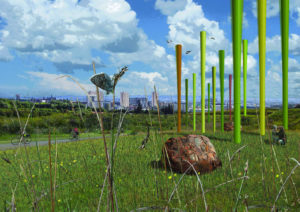 The LAGI Glasgow exhibition demonstrates three distinct and unique designs that employ renewable energy generation without sacrificing eye appeal. Each more fantastic than the one before, the installations pay homage to the site’s natural surroundings, while incorporating some of the latest evolutions of clean energy technology, such as bladeless (or “vortex” style) wind turbines. Air, water, and light are all treated as sources of potentially endless value, within clean energy projects designed and executed by multidisciplinary teams from multiple continents.

Related: The world’s largest floating wind farm will be operational next year 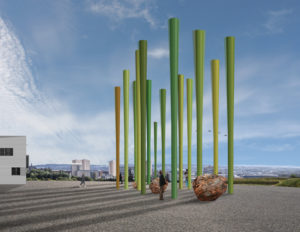 ‘Wind Forest’ is the aptly named grove of towering wind turbines created by Peter Foster Richardson of Glasgow’s own ZM Architecture and Scottish environmental artists Matthew Dalziel and Louise Scullion or Dalziel + Scullion. The artificial forest will transform 100 Acre Hill into a wind energy farm, sporting 100 4 kW single bladeless wind turbines, in three distinct groves, each painted in a slightly different shade pulled from the palette of the surrounding landscape. This part of the exhibition was designed and constructed with assistance from UK-based electrical engineer Ian Nicoll of Qmulus Ltd and Peter Yeadon at Yeadon Space Agency, headquartered in Brooklyn. The forest will also feature a number of man made boulders, intended as a reference back to the site’s glacial origins. 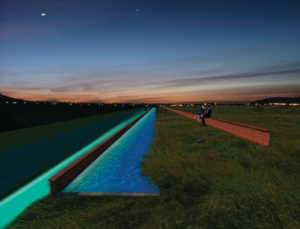 The second of three parts of the exhibition shines a spotlight on the unique power hidden in Earth’s most abundant resource: water. ‘Watergaw’ is a hydropower installation comprised of water-callers and wind-callers, representations of natural features at the exhibition site. This design stems from the collaborative efforts of Glasgow-based ERZ Studio, along with Scottish born artist Alec Finlay, and Berlin-based artist Riccardo Mariano. Mariano is responsible for the brilliant rainbow in the sky above the water element, which can be seen from the city below. A host of other consultants participated in developing and honing the design. For its energy generation feats, Watergaw centers around a micro-hydro turbine installation at Monkland Canal and an array of seven small-scale vertical axis wind turbines. 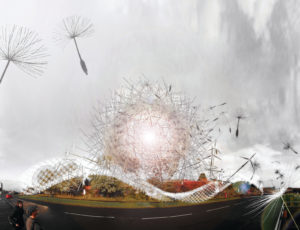 The final portion of the LAGI Glasgow exhibition is ‘Dundas Dandelions,’ so named for its resemblance to a white puff of dandelion seeds waiting to be swept off in the wind. It’s a fantastic conglomeration of various models of wind turbines, kinetic (torque) generators, and piezoelectric disks which, working in concert, are capable of producing as much as 500 MWh of clean energy each year. For this dazzling spectacle, which is illuminated at night, two local firms Stallan Brand Architectural Design and Pidgin Perfect joined forces with the Glasgow Science Festival and University Glasgow, with support from California’s M-Rad Architects.