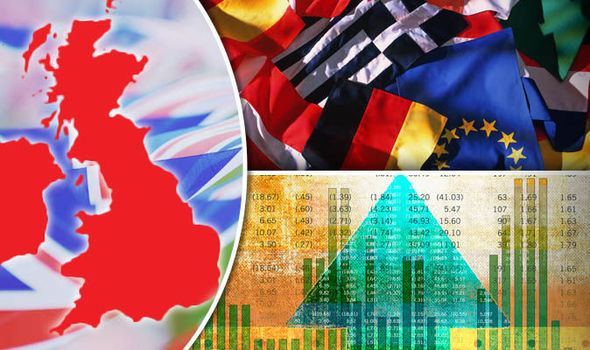 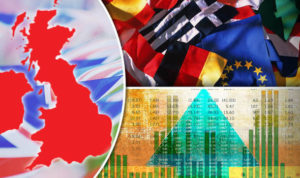 BRITAIN’s Brexit boom has hit new heights with 27 countries announcing that they want a trade deal with the UK and a tourism bonanza expected this summer because of the cheaper pound.

With the UK on the brink of a new era of prosperity free from Brussels rule, new figures have revealed that the euro zone continues to be the dead weight of the world economy.

According to eurostat, the 19 country currency zone at the heart of the failing EU project only grew by 0.3 per cent in the last quarter, just half the rate of the UK.

According to reports 27 countries with a combined GDP of more than £40 trillion – over two thirds of the global economy – now want to take advantage of Brexit and strike new trade deals with the UK.

The vast economic potential dwarfs the EU’s single market worth around £12 trillion, just 22 per cent of the world’s GDP.

While Britain is trapped in the EU it cannot do its own deals and has to compromise with the other 27 members, but with independence on the way new Trade Secretary Liam Fox has been on a tour of America to start work on new deals.

Only two of the world’s top 10 economies – Italy and France, which are both on the verge of major financial crises – have yet to express an interest in doing a trade deal with Britain.

Britain’s leading investor Jim Mellon – known as the UK’s answer to the US billionaire Warren Buffet – said that the economic picture in the Britain was “a complete vindication of the Brexit vote.”

He attacked the Remain campaign’s attempts top “paint a gloomy picture and put the country into a negative cycle.”

He said: “What are they trying to do, talk the country down? Cause a recession?”

He went on: “There is nothing not to like about what has happened.

He predicted that with UK contract law still central for the world’s markets that Britain would become a more successful version of Singapore as the “banking and financial centre for the world.”

He said: “All this nonsense that people would relocate to frankfurt or Paris has proven to be rubbish.”

And he said that the latest eurostat figures have highlighted that “things are going wrong in the EU even more quickly than we feared.”

He said that the Italian banking crisis with 300 to 400 billion euros of unsecured debt meant it will eventually have to crash out of the euro causing an economic crisis in the block.

But he warned that the German banking system is also on the verge of needing a bailout while all the Southern European economies are being forced to break the EU’s rules to keep their economies afloat.

He said: “We are well out of it. If we stay these euro zone problems would be our problems but when we are out we are only responsible for ourselves.”

Meanwhile the UK is enjoying a “Brexit boom” in tourism because of the pound dropping in value by 13 per cent and thousands of foreign visitors deciding to spend their summer holidays here bringing in billions of pounds.

Hotels, airline companies and visitor attractions like the London Eye have all reported a dramatic increase in bookings in July.

British “staycation” people have also been put off travelling abroad by the increased cost of holidays in Europe, massive delays at Dover and spate of horrendous terrorist attacks on the continent.

Tourism Alliance chairman Bernard Donoghue has reported that early summer research by his organisation is suggesting that there are 18 per cent more foreign visitors and 11 per cent more British tourists to London this July compared with the same month last year.

He said: “We know people are responding very well to the London Is Open campaign.”

Online accommodation service Airbnb has also claimed that it saw a 24 per cent rise in London visits in the month after 23 June referendum result compared with the month before.

It said that guests from 164 countries have booked to stay at homes in the capital.

According to travel website Opodo passengers coming from the continent to the UK have also increased by 42 per cent while a bonanza for West End shops in London suggests that heightened tourist activity has seen an increase in sales at Fortnum and Mason of 20 per cent.

The HotelsCombined website’s UK and Ireland country manager Dmitrijus Konovalovas said: “Searches for London hotels by UK travellers have in- creased 22 per cent in the 30 days since the EU referendum result.

“In the same period we’ve seen jumps in foreign searches for stays in the city. Those from Italy are up 23 per cent, Germany 20 per cent and Spain 15 per cent.

“There was a doubling of interest from Saudi Arabia and an 18 per cent rise in searches from Hong Kong. London remains firmly on the map for both domestic and overseas travellers.”

The queue of countries lining up to do a trade deal with Britain comes despite President Obama’s ludicrous claim on a visit to Britain during the referendum campaign that the UK would “be at the back of the queue” for a trade deal.

Presidential hopeful Donald Trump has already dismissed Mr Obama’s statement which many believe he was asked to make as a special favour to former Prime Minister David Cameron, who was leading Remain’s Project Fear campaign based on a series of false doom laden claims.

It was noted at the time that Mr Obama had used the British word “queue” rather than the American English “line”.

The threat was also made by other world leaders at press conferences with Mr Cameron including the Japanese Prime Minister whose country is also seeking a trade deal along with the US.