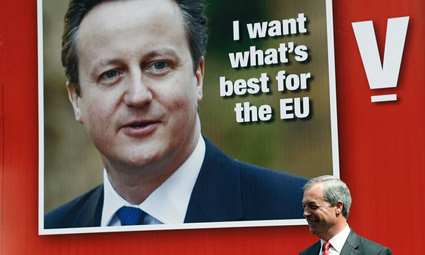 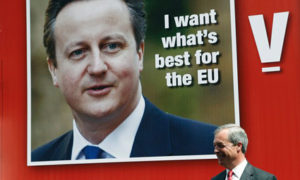 If Britain votes to leave the European Union in two days’ time, it will be on the basis of promises by elite politicians that will prove impossible to keep. And we will have arrived at Brexit Britain, in large part, because David Cameron did exactly the same thing. For Steve Hilton to so aggressively turn on his former boss and effectively attempt to destroy his career is astonishing. But his “revelations” – that Cameron was told by Whitehall officials four years ago that his immigration targets could not be met – are anything but. You don’t have to be a senior mandarin to have known this. Forget freedom of movement in the EU: more immigrants arrive in Britain from outside the EU; cumulatively over the years, dramatically more so. The need for immigration is often driven by government failure: last year we were recruiting one in four of our nurses abroad after government cuts to nurse training places year after year, for example.

For politicians to promise policies they cannot deliver disastrously undermines faith in the democratic system. That lack of trust is fuelling the leave campaign. But Cameron’s pledge also fuelled anti-immigration sentiment. He framed mass immigration as a huge problem that required a radical solution: a target that would have achieved a monumental reduction in the number of people entering the country. “For too long, immigration has been too high,” he declared in 2011, and the failure of immigrants to integrate had caused “discomfort and disjointedness” in communities.

On the eve of the 2015 general election, Cameron warned that a Labour government would mean a “return to uncontrolled immigration”. “Uncontrolled mass immigration makes it difficult to maintain social cohesion, puts pressure on public services and forces down wages,” said Cameron’s immigration minister, James Brokenshire.

What happens when a prime minister tells his country that immigration is much too high, is the source of many of the country’s problems, that it has to be massively reduced – and then immigration remains at the same level? Now we know: it is what is being played out in front of us, leaving a sizeable question mark hanging over our country’s future.

The charlatans of the leave campaign are now stirring and inciting bigotry for political gain, unleashing demons that will prove difficult to contain whatever the referendum result. But they are also committing the same sin as Cameron. A sizeable reduction in immigration – one that people would actually notice – is extremely unlikely to happen, unless the post-Brexit economic shock is so great that people flee our shores. Britain already has control over the majority of immigration. If immigration did fall by, say, 10,000, that would mean 16 fewer people – or four families – arriving in every constituency. Who would notice that? Crime fell for many years, but the polls showed that most people still believed crime was rising. The lack of affordable housing and secure jobs, stagnating living standards, public services reeling from cuts – these are all social problems fuelling anti-immigration sentiment, and they would only get worse.

There are things that the government could have done. It scrapped the migration impact fund, which gave extra resources to communities with higher levels of immigration. Instead he could have extended it: EU immigrants pay in more than they get back, and this money could have been ringfenced for such an initiative. Rather than leaving English language services under-resourced, it could have funded them properly. Concerns over immigration can be dealt with – without making impossible promises.

Will Britain press the eject button on Thursday? If it does, it will be the most dramatic consequence yet of how far people’s faith in politics has been undermined – and we will all suffer for it.