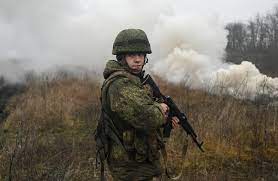 The United States of America and Russia have recently been at loggerheads over the issue of Ukraine.

Weeks ago the leaders of the two superpowers behind the Ukrainian situation convened a meeting on the crisis. Although they both drew a clear line between them during the meeting, they made no political commitment, thus showing that the political chess game surrounding Ukraine has only just begun.

The meeting between Biden and Putin about the Ukraine situation

In what was seen as a “frank and pragmatic” conversation by both sides, President Putin made it clear to President Biden that he was not satisfied with the implementation of the February 11, 2015 Minsk-2 Agreement (which, besides establishing ceasefire conditions, also reaffirmed arrangements for the future autonomy of pro-Russian separatists), as NATO continues to expand eastward. President Biden, in turn, noted that if Russia dared to invade Ukraine, the United States of America and its allies would impose strong “economic sanctions and other measures” to counterattack, although no US troop deployments to Ukraine were considered.

Since November 2020 Russia has had thousands of soldiers stationed on Ukraine’s border. The size of the combat forces deployed has made the neighbouring State rather nervous.

The current crisis in Ukraine has deepened since the beginning of November 2021. Russia, however, has denied any speculation that it is about to invade Ukraine, stressing that the deployment of troops on the Russian-Ukrainian border is purely for defensive purposes and that no one should point the finger at such a deployment of forces on the territory of Russia itself.

It is obvious that such a statement cannot convince Ukraine: after the 2014 crisis, any problems on the border between the two sides attract attention and Ukraine still has sporadic conflicts with pro-Russian separatists in the eastern part of the country.

Firstly, the fundamental reason why the US-Russian dispute over Ukraine is hard to resolve is that there is no reasonable position or room in the US-led European security architecture that matches Russian strength and status.

Over the past thirty-two years, the United States of America has forcibly excluded any reasonable proposal to establish broad and inclusive security in Europe and has built a post-Cold War European security framework that has crushed and expelled Russia, much as NATO did when it contained the Soviet Union in Europe in 1949-1990.

Moreover, Russia’s long cherished desire to integrate into the “European family” and even into the “Western community” through cooperation with the United States of America – which, in the days of the impotent Yeltsin, looked upon it not as an equal partner but as a semi-colony – has been overshadowed by the resolute actions of NATO, which has expanded eastward to further elevate its status as the sole superpower, at least in Europe, after its recent failure in Afghanistan.

Maintaining a lasting peace after the great wars (including the Cold War) in the 20th century was based on treating the defeated side with tolerance and equality at the negotiating table. Facts have shown that this has not been taken on board by the policy of the United States of America and its Western fawners and sycophants. Treating Russia as the loser in the Cold War is tantamount to frustrating it severely and ruthlessly, thus depriving it of the most important constituent feature of the post-short century European security order.

Unless Russia reacts with stronger means, it will always be in a position of defence and never of equality. Russia will not accept any legitimacy for the persistence of a European security order that deprives it of vital security interests, wanting to make it a kind of protectorate surrounded by US-made nuclear bombs. The long-lasting Ukrainian crisis is the last barrier and the most crucial link in the confrontation between Russia, the United States of America and the West. It is a warning to those European countries that over the past decades have been deprived of a foreign policy of their own, not just obeying the White House’s orders.

Secondly, the Ukrainian issue is an important structural problem that affects the direction of European security construction and no one can afford to lose in this crisis.

While Europe can achieve unity, integrity and lasting peace, the key challenge is whether it can truly incorporate Russia. This depends crucially on whether NATO’s eastward expansion will stop and whether Ukraine will be able to resolve these two key factors on its own and permanently. NATO, which has continued to expand in history and reality, is the most lethal threat to security for Russia. NATO continues to weaken Russia and deprive it of its European statehood, and mocks its status as a great power. Preventing NATO from continuing its eastward expansion is probably the most important security interest not only of Russia, but also of European countries with no foreign policies of their own, but with peoples and public that do not certainly want to be dragged into a conventional war on the continent, on behalf of a country that has an ocean between Europe and itself as a safety belt.

The current feasible solution to ensure lasting security in Europe is for Ukraine not to join NATO, but to maintain a permanent status of neutrality, like Austria, Finland, Sweden, Switzerland, etc. This is a prerequisite for Ukraine to preserve its territorial integrity and sovereignty to the fullest extent possible, and it is also the only reasonable solution for settling the deep conflict between Russia and the United States of America.

To this end, Russia signed the aforementioned Minsk-2 Agreement of 2015. Looking at the evolution of NATO over the past decades, however, we can see that it has absolutely no chance of changing a well-established “open door” membership policy.

The issue of the Ukraine

The United States of America and NATO will not accept the option of a neutral Ukraine, and the current level of political decision-making in the country is other-directed. For these reasons, Ukraine now appears morally dismembered, and bears a striking resemblance to the divided Berlin and the two pre-1989 Germanies. It can be said that the division of Ukraine is a sign of the new split in Europe after Cold War I, and the construction of the so-called European security – or rather US hegemony – ends with the reality of a Cold War II between NATO and Russia. It must be said that this is a tragedy, as the devastating consequences of a war will be paid by the peoples of Europe, and certainly not by those from New England to California.

Thirdly, the misleading and deceptive nature of US-Russian diplomacy and the short-sightedness of the EU, with no foreign policy of its own regarding the construction of its own security, are the main reasons for the current lack of mutual trust between the United States of America – which relies on the servility of the aforementioned EU – and Russia, terrified by the nuclear encirclement on its borders.

The United States took advantage of the deep problems of the Soviet Union and of Russia’s zeal and policies for the self-inflicted change in the 1990s – indeed, a turning point – at the expense of “verbal commitment” diplomacy.

In 1990, on behalf of President George H. W. Bush’s Administration, US Secretary of State Baker made a verbal promise to the then Soviet leader, Mikhail Gorbachev, that “upon reunification, after Germany remaining within NATO, the organisation would not expand eastward”. President Clinton’s Administration rejected that promise on the grounds that it was its predecessor’s decision and that verbal promises were not valid, but in the meantime George H. W. Bush had incorporated the Baltic States into NATO.

In the mid-1990s, President Clinton indirectly made a verbal commitment to Russia’s then leader, the faint-hearted Yeltsin, to respect the red line whereby NATO should not cross the eastern borders of the Baltic States. Nevertheless, as already stated above, President George H. W. Bush’s Administration had already broken that promise by crossing their Western borders. It stands to reason that, in the eyes of Russia, the “verbal commitment diplomacy” is rightly synonymous with fraud and hypocrisy that the United States of America is accustomed to implementing with Russia. This is exactly the reason why Russia is currently insisting that the United States and NATO must sign a treaty with it on Ukraine’s neutrality and a ban on the deployment of offensive (i.e. nuclear) weapons in Ukraine.

Equally important is the fact that after Cold War I, the United States of America, with its mentality of rushing to grab the fruits of victory, lured 14 small and medium-sized countries into the process of expansion, causing crises in Europe’s peripheral regions and artfully creating Russophobia in the Central, Balkan and Eastern European countries.

This complete disregard for the “concert of great powers” – a centuries-old principle fundamental to ensuring lasting security in Europe – and the practice of “being penny wise and pound foolish” have artificially led to a prolonged confrontation between Russia and the European countries, in the same way as between the United States of America and Russia. The age-old trend of emphasising the global primacy of the United States of America by creating crises and inventing enemies reaffirms the tragic reality of its own emergence as a danger to world peace.

All in all, the Ukraine crisis is a key issue for the direction of European security. The United States will not stop its eastward expansion. Russia, forced into a corner, has no other way but to react with all its might and strength. This heralds Cold War II in Europe, and lasting turmoil and the possible partition of Ukraine will be its immutable destiny.

The worst-case scenario will be a conventional war on the continent between NATO troops and Russian forces, causing millions and millions dead, as well as destroying cities. The war will be conventional because the United States would never use nuclear weapons – but not out of the goodness of its heart, but out of fear of a Russian response that would remove the US territory from the NBC security level.

To the point that that we will miss the good old days of Covid-19.

Japan's Economy Shrinks Slightly in First Quarter
The country’s gross domestic product fell at annual rate of 1{c11d7c83d2cabf5b1876a9de981f119215a0edef7ae2c4bd39c8652e99a0014f} owing to Covid-19 restrictions, but an upswing is expected ...
Mariupol's Last Defenders Yield, Ending Long Russian Siege
Completing the capture of Mariupol is a long sought victory for Russia, and Ukrainian soldiers are being taken from the ...
U.K. Threatens to End Key Part of Brexit Deal
The British government threatened to tear up an important part of its Brexit divorce deal with the European Union, saying ...
China Eastern Black Box Points to Intentional Nosedive
Flight data suggests that someone in the cockpit of the Boeing 737-800 that crashed in March put the aircraft into ...
How Germany Is Racing to Sever Dependence on Russian Energy
Europe’s largest economy is scrambling to find new suppliers and invest billions in infrastructure to reverse decades of policy in ...
Hezbollah-Led Coalition Loses Seats in Lebanon's Election
Hezbollah and its allies lost their parliamentary majority in the Lebanon’s first election since the 2020 Beirut port explosion, in ...