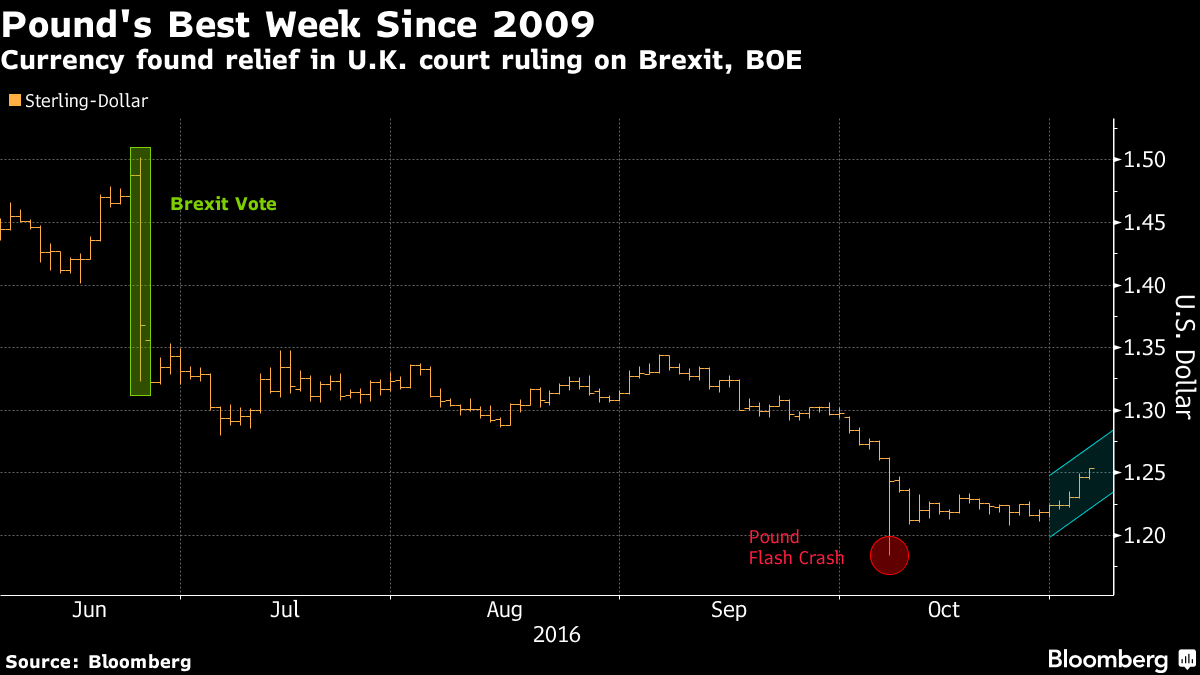 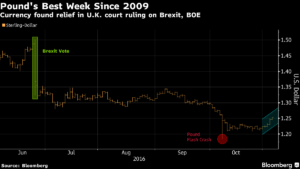 Don’t be lulled into a false sense of security on the pound.

That’s the advice of the currency’s most-accurate forecasters after sterling posted its best week since 2009. The pound surged after a court ruled the U.K. can’t start the process of leaving the European Union without lawmakers’ approval, stoking speculation Brexit will be delayed or watered down.

Yet with the government due to appeal the Nov. 3 verdict, and the terms of divorce remaining as murky as ever, strategists urge caution. Svenska Handelsbanken AB, which topped Bloomberg’s latest pound-forecaster rankings, predicts an almost 3 percent drop to $1.22 by the end of March — the deadline Prime Minister Theresa May has set for triggering the nation’s departure.

“Political uncertainty will stay,” said Claes Mahlen, Handelsbanken’s Stockholm-based head of trading strategy. “It wasn’t an insignificant move, but you could have expected more given the nature of the events.”

Even after its 2.8 percent jump this week, to about $1.25 as of the Friday market close in London, the pound is still down 16 percent since the June 23 referendum. It remains vulnerable to the drip-feed of political headlines and there’s an argument that the court judgement makes its fortunes more, not less, bleak.

The verdict “does soften the immediate risk of a so-called hard-Brexit scenario, but does it really clear anything up?” said John Hardy, head of foreign-exchange strategy at Saxo Bank A/S in Denmark, the No. 2 pound forecaster. “I don’t think so, because we actually risk extending the uncertainty. The best I can say for the pound is that we’ve stopped the bleeding for now.”

Saxo predicts a drop to $1.20 in three months’ time, compared with the median estimate in a Bloomberg survey for a first-quarter level of $1.22.

The pound got a further lift after the Bank of England said Thursday that it doesn’t expect to cut interest rates again this year. Officials left the door open to future policy adjustments, though, and with next week’s U.S. election potentially causing volatility across the world, sterling still faces risks, according to ING Groep NV.

“What the BOE have now done is just open up sterling to vulnerability on the data front,” said Viraj Patel, a London-based strategist at the Dutch bank, which was eighth in Bloomberg’s forecaster rankings and sees the pound at $1.22 by year-end.