THE MOBILE PAYMENTS IN CHINA REPORT: What the US can learn from China’s enormous success in mobile payments 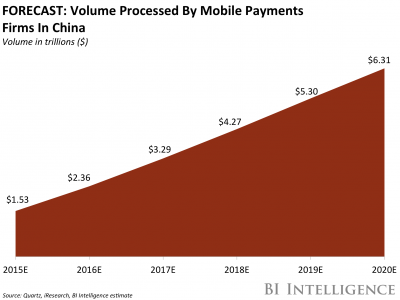 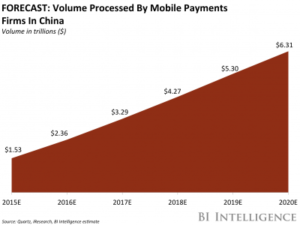 Even accounting for population discrepancies, China will generate over $1,700 in mobile payments volume per capita in 2016, compared with $475 in the US, based on forecasts from BI Intelligence and eMarketer. China’s advantage will eventually diminish, but it will still produce around twice as much volume per capita in 2020.

China has unique factors buoying the industry, like the dominance of mobile phones, a lack of legacy infrastructure, and the surging popularity of digital retail marketplaces. Some of the characteristics behind the country’s success can be mimicked, or even replicated to some extent, in other markets like the US. However, one fundamental barrier in the US is that it’s being forced to layer mobile payments on top of an existing payments system, and the ecosystem is very fragmented.

A new report from BI Intelligence takes a deep dive into China’s mobile payments ecosystem and deciphers which growth drivers can be exported to the US to help spark its relatively lackluster market.

Here are some of the key takeaways:

In full, the report: