How China and the EU can boost investment

Global economic growth, says the International Monetary Fund, has been “too slow for too long.” A major reason has been sharply decelerating growth in global trade, which the World Trade Organization expects to grow by 1.7% this year – far below the 6.7% average in the decade preceding the 2008 crisis. With trade alone no longer capable of underpinning global cooperation, it is time to add more investment linkages to the mix.

As it stands, there is no real global-level investment framework. But the G20 recently approved the world’s first programmatic document on multilateral investment, entitled the G20 Guiding Principles for Global Investment Policymaking. The general framework it provides could be particularly valuable for China and the European Union, as they attempt to negotiate a bilateral investment treaty (BIT). 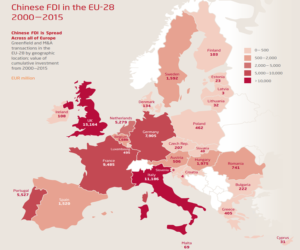 So far, there have been several rounds of BIT talks, focusing on increased investment protection and market access. Many more rounds are on the way, as some significant issues – including guarantees of regulatory transparency and the creation of an effective dispute-settlement mechanism – have yet to be fully agreed.

The Sino-European BIT is to be based on 26 existing BITs involving China and 28 individual EU members – treaties that are far from consistent, in terms of requirements for and restrictions on market access. This lack of uniformity is a major motivation for China to negotiate a single treaty: it wants to ensure that its enterprises have equal market access in all EU member countries and avoid the costs and complications associated with adhering to different regimes. Gaining access to the advanced technologies and management expertise of European firms is another major enticement.

The EU, for its part, hopes that money flowing in from China will help to boost its struggling economy and pave the way for increased trade. Among its main demands is that access to China’s market be governed by a negative list (a list of exceptions to what would otherwise be open market access), rather than by a lengthy government-approval process.

Here, China has already taken some steps forward. Last December, the State Council decided to introduce a negative list for market access that applies to all investment activities in China, by both domestic and foreign investors. A pilot version of this list has proved itself in Shanghai, Guangdong, Tianjin, Fujian, and other free-trade trial areas.

Beyond addressing institutional issues, however, China and the EU need to dismantle cultural and conceptual barriers to investment. Both sides must work to increase mutual understanding and trust through various negotiation mechanisms and to encourage “track II diplomacy” (interactions among smaller non-state actors). To this end, the European Commission seems prepared to establish a transparent “investment project portal” – open to the European public, as well as to Chinese and other third-party investors – to facilitate the sharing of information, knowledge, and resources for European investments.

For both sides, there is plenty of work ahead to conclude a BIT. But that is no reason to delay the expansion of investment cooperation. In parallel with their BIT negotiations, China and the EU should be pursuing three main goals.

First, China and the EU must follow through on their 2015 agreement that key strategic initiatives for each economy should be better integrated. On China’s side, these include the “one belt, one road” initiative, which focuses on strategic investment, and its structural reform plans, which focus on making the economy more market-oriented and bolstering innovation.

On Europe’s side, such initiatives include the Europe 2020 economic growth strategy and the European Commission’s Investment Plan for Europe, commonly known as the Juncker Plan, both of which aim to help Europe build a more innovative, sustainable, inclusive, and dynamic economy. In addition, the “16+1 cooperation” between China and Central and Eastern European countries should become more transparent and integrated with wider Sino-European cooperation.

A second main objective for China and Europe should be to contribute to protecting and developing global value chains, which foster trade and investment through economic integration. The emergence of these value chains has transformed global trade from a zero-sum game to a foundation for mutually beneficial collaboration.

Yet some political forces in Europe (as well as the United States) are now speaking out against international economic integration, proposing a return to the protectionism of the past. As soon as one country blocks another country’s goods or services from entering its market, global value chains will be disrupted, producing spillover effects that hurt everyone – including the country that erected the barriers.

Given this, European and Chinese leaders must make the case for continued liberalization of trade and investment, despite the political challenges that may arise, particularly in Europe. This is especially important with regard to the services sector. Europe and China need to open up their services markets to two-way trade, including by dismantling remaining barriers to trade in information technology and promoting technology transfer.

The third key objective that the EU and China should be pursuing on the way to a BIT is the development of new mechanisms to finance investment. Such efforts have been pursued by each separately: China led the establishment of the Asian Infrastructure Investment Bank, while the EU has the European Investment Bank (EIB) and the European Fund for Strategic Investments (which forms a pillar of the Juncker Plan). China and the EU should use such platforms to promote integration and cooperation in investment financing.

As it stands, there is far less direct investment between China and the EU than there is between China and its other large trading partners, including the US and Brazil. With trade growth slowing, both sides should seek to tap their huge potential for mutual investment as quickly as possible.