European countries could see a ‘tremendous acceleration of growth’ in the summer, Dutch finance chief says

- European countries could experience a “tremendous acceleration of growth” in the summer, as vaccinations are stepped up, Dutch Finance Minister Wopke Hoekstra told CNBC exclusively on Monday. - “If I look back at what we saw after the first wave of Covid we saw in the Netherlands, but also in many other countries, a tremendous acceleration of growth,” Hoekstra said. 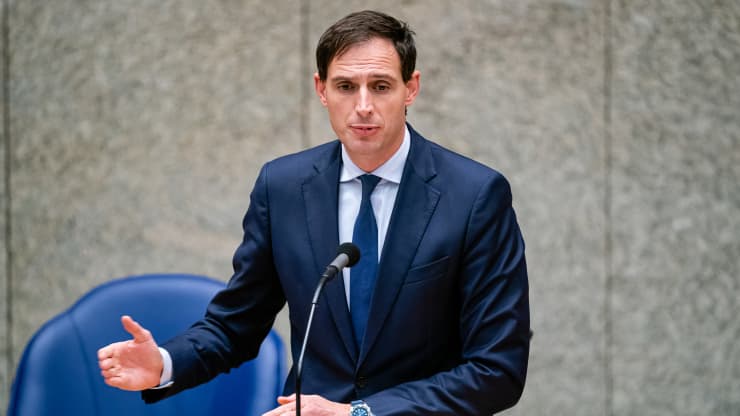 LONDON — European countries could experience a “tremendous acceleration of growth” in the summer, as vaccinations are stepped up, Dutch Finance Minister Wopke Hoekstra told CNBC.

European economies are wrestling against one of the deepest shocks in history. The coronavirus pandemic has halted much of Europe’s economic activity and the Covid-19 vaccine rollout has been bumpy. Euro zone member states contracted by almost 7% in 2020 and strict social restrictions are still in place, clouding the prospects for 2021.

The European Commission, the EU’s executive arm, turned more negative on the economic recovery, cutting its GDP forecast for the year to 3.8%, from the 4.2% estimated in November. However, the Dutch finance chief is confident that economic activity will pick up in the summer.

“In my view, we have to be realistic but there is also reason to be slightly more optimistic than the commission has been in its forecasts, because if I look back at what we saw after the first wave of Covid, we saw in the Netherlands, but also in many other countries, a tremendous acceleration of growth,” Hoekstra told CNBC exclusively on Monday.

Most European nations introduced their first lockdowns in March 2020, but saw a pickup in activity in the third quarter of the year. Warmer temperatures, along with softer social restrictions, allowed restaurants, shops and bars to reopen after the first lockdowns.

This meant that after a contraction of about 11% in the second quarter, the euro zone grew around 12% between July and September.

“I think then with a far increased level of vaccination, with the summer entering the continent, with all that we can do in terms of testing … I’m actually quite optimistic that will be the phase where we slowly but surely get back to normal,” he added.

‘Too early to tell’
Hoekstra has long been a vocal supporter of fiscal prudence. He ruffled some feathers last year for reportedly asking European authorities to investigate why some southern European nations did not have more fiscal room to deal with the pandemic.

However, Hoekstra said he supports loose fiscal policy now given the “extraordinary” crisis.

The euro zone has actually frozen its fiscal targets in the wake of the pandemic. This means that countries do not have to bring down their deficits to below 3% of their GDP, nor their debts to below 60% of GDP.

When asked when these should be reinstated, Hoekstra said “it is too early to tell.”

“Covid is taking longer than expected … and it is hard to say when the change will come but definitely in my view, not this calendar year,” he said.

Biden Isn't Planning to Share Covid-19 Vaccines With Mexico
The Biden administration isn’t considering sharing its Covid-19 vaccine supply with Mexico, White House press secretary Jen Psaki said ahead ...
Father and Son Accused of Helping Ghosn Escape Are Taken to Japan
Michael Taylor and Peter Taylor haven’t denied helping the former Nissan Motor chairman escape, but they say they don’t think ...
Covid-19 Vaccine Program in U.K. Cut Deaths, Hospitalizations
One dose reduced the risk of hospitalization among people over 70 years old by 80{15dafa50e84825ebb78637cedfb5a6088f3a1df2e80e2d0300aa84970b5bd5c0} compared with those of a ...
Former French President Sarkozy Convicted in Corruption Trial
Nicolas Sarkozy was found guilty of trying to bribe a magistrate, becoming the first president in the history of France’s ...
In Nigeria's Largest-Ever Kidnapping of Schoolgirls, Gunfire, Screams, Anguish
Days after 317 girls were taken by gunmen from a school, some of those who managed to escape described how ...
Myanmar's Aung San Suu Kyi Faces New Charges
The country’s most popular political leader, who was ousted in a military coup, is entangled in a web of legal ...