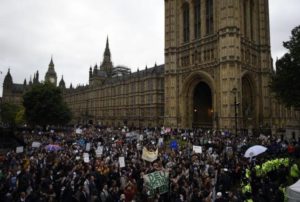 The Brexit vote was advisory so lawmakers in parliament should decide whether Britain should leave the European Union, more than 1,000 prominent British lawyers said in a letter to Prime Minister David Cameron.

The signatories, which include senior lawyers, said that lawmakers should have a free vote in parliament before any British leader takes the decision to trigger the formal EU divorce procedure by invoking Article 50 of the Lisbon treaty.

The letter is the latest attempt by opponents of Brexit to slow the divorce process. Some “Leave” campaigners say there is a concerted attempt to prevent an EU departure by entangling any process in political and legal challenges.

“Our legal opinion is that the referendum is advisory,” the lawyers said in a letter dated July 9 that was signed by 1054 lawyers. Reuters has a copy of the letter.

“We believe that in order to trigger Article 50, there must first be primary legislation.”

While the leading contenders to succeed Cameron say the vote will be implemented, the government is facing legal challenges over whether it can begin divorce proceedings without approval from parliament.

England and Wales voted to leave, while Scotland, Northern Ireland and Gibraltar voted to remain.

“The Brexit referendum has made clear that the UK is not a united nation-state, but a divided state of nations,” said Aidan O’Neill, who specializes in constitutional law and EU law. “If the UK is to survive the result of this vote, a consensus needs to be built up about the way forward.”

“Fully informed discussions and deliberations within and between our parliaments is the only proper constitutional way to achieve this,” O’Neill added.

The lawyers, including Philip Kolvin, a senior advocate at Cornerstone Barristers, said the British government should establish a royal commission to review the evidence and to report on the benefits and risks of triggering Article 50.

“The parliamentary vote should not take place until the commission has reported,” the letter said.