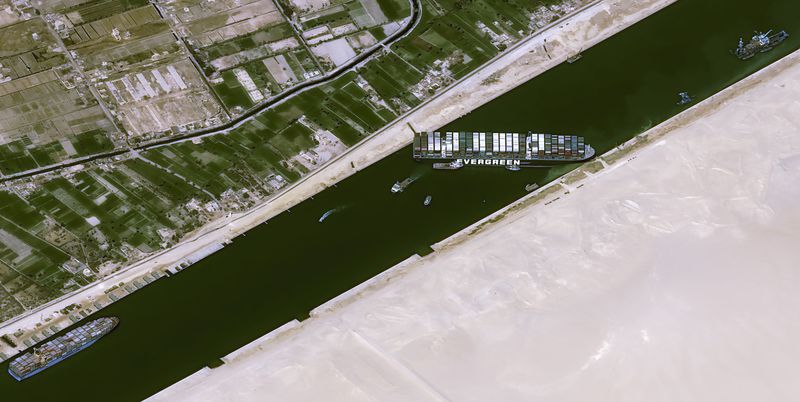 Efforts to dislodge the massive Ever Given container vessel blocking the Suez Canal will take until at least next Wednesday, longer than initially feared, raising the prospect that the incident will trigger disruptions across global supply chains from oil to grains to cars.

The task of re-floating the 200,000-ton ship, still firmly wedged across the vital maritime trading route, will require about a week of work and potentially longer, said people familiar with the matter, who asked not to be identified. Rescue efforts had initially been expected to last only a couple of days.

The extended disruption is going to stretch a container shipping industry that’s already operating at full capacity, threatening more delays for European companies that rely on a steady flow of Asian imports and for consumers who’ve grown fond of fast online purchases during the pandemic.

The world’s busiest lane for merchandise trade — between the U.S and China –- has faced nearly five months of bottlenecks at the twin ports of Los Angeles and Long Beach that have importers waiting several weeks for arriving cargo or exporters unable to secure empty steel boxes needed for shipments abroad. The fear now is that Suez incident will exacerbate Europe’s logistical challenges — canceled sailings, container shortages and higher freight rates.

“The delays are likely to increase costs, adding to already widespread inflationary pressure on supply chains,” said Chris Rogers, lead trade analyst for S&P Global Market Intelligence’s Panjiva. “The short-term ripple effects will be an increased potential for stock-outs in consumer goods and the risk that just-in-time manufacturing supply chains that had already been roiled by Brexit and commodity shortages may face further interruptions.”

Work since Tuesday by tugs and diggers — equipment that’s tiny in comparison with the 400-meter long vessel — has so far been unsuccessful, and the queue of waiting oceangoing carriers loaded with billions of dollars worth of oil and consumer goods has risen to more than 300 from 186 on Wednesday, according to Bloomberg data.

Should cargo need to be unloaded from the stranded vessel, or extensive repairs made to the canal itself, “then the downtime could certainly last at least two weeks,” according to Randy Giveans, senior vice president of Equity Research for Energy Maritime at Jefferies LLC.

Vessels that had been scheduled to traverse the Suez Canal are beginning costly and time-consuming detours around Africa as the shipping sector scrambles to keep deliveries moving. Shipping costs are also surging — the price to ship a 40-foot container from China to Europe has almost quadrupled from a year ago — adding a new burden to global supply chains already reeling from a pandemic that has sowed havoc with shortages and delays.

South Korea’s HMM Co. instructed a container ship that departed the U.K. on Monday to divert around the Cape of Good Hope to avoid the gridlock. At least seven liquefied natual gas vessels have had routes adjusted away from the canal, according to Kpler analyst Rebecca Chia, and major shippers including A.P. Moller-Maersk A/S and Hapag-Lloyd AG are also studying detours.

The canal blockage is currently holding up about 2 million barrels a day of oil flows, according to Braemar estimates, and snarling bulk carriers that ship products from wheat to iron ore. Global manufacturers are already preparing for delays to both the shipment of finished goods, and materials that are crucial to their production lines.

A list of cargo aboard a HMM Co. vessel waiting outside the canal to return to Asia gives an indication of the sweep of industries caught up in the disruption, with goods on board including wood, machinery, frozen beef, paper, powered milk, furniture, beer, frozen pork, auto components, chocolate, and cosmetics.

For more details on the Suez Canal blockage, click here

Caterpillar Inc., the largest U.S. machinery producer, said it is facing shipment delays and even considering airlifting products if necessary, while Japan’s Envision AESC, a supplier of electric vehicle batteries, said it relies on the Suez Canal for some imports of electrodes.

Mark Ma, owner of Seabay International Freight Forwarding Ltd., a company in Shenzhen that handles Chinese goods including toys, pillows and mattresses sold on platforms such as Amazon.com Inc., said his company has 20 to 30 containers on the ships waiting to cross the blocked canal.

“If it can’t be resumed in a week, it will be horrible,” said Ma. “We will see freight fares spike again. The products are delayed, containers can’t return to China and we can’t deliver more goods.”

Vessels currently outside of the Red Sea planning to use the Suez Canal will need to decide whether to reroute around Africa, adding 10 to 15 days to their voyages, according to Giveans. Ships queuing on either end of the Suez Canal area are likely to wait to determine how long the passage will be closed before taking a decision to divert, he said.

For the container lines that haul about 80% of global merchandise trade, a prolonged bottleneck between Europe and Asia risks throwing off ship schedules set months in advance so importers can plan their purchases, manage inventories and keep store shelves stocked or production lines running.

The problem compounds with every day container ships have to wait. Vessels that arrive several days late can’t be emptied and reloaded in time to make the scheduled return journey. That leads carriers to cancel trips — further constraining capacity and pushing up freight rates.

Rerouting around South Africa’s Cape of Good Hope would add 6,000 miles to the journey and something like $300,000 in fuel costs for a supertanker delivering Middle East oil to Europe. Shipbrokers report that oil traders are increasingly hiring tankers with “just-in-case” options to sail around Africa should the blockage drag on. Vessels traveling empty to collect oil in northwest Europe could get delayed, forcing the region’s exporters to seek alternative carriers, according to people involved in that market.

What a Long Suez Closure Means for the Oil Price: Julian Le

Rates to charter oil tankers in some regions have climbed higher since the blockage first appeared. Suezmax vessels, which typically haul 1 million barrels through the canal, are now fetching about $17,000 a day, the most since June 2020. If more ships are forced to sail around the southern tip of Africa, that will boost rates as journey times increase.

All eyes are on this inflation number, which could have the biggest gain in nearly a decade 179