- Singapore’s government on Tuesday announced its spending plans for the financial year starting in April, as well as several policies to boost revenue in the future. - Analysts from Singapore’s largest bank DBS said stocks with exposure to the aviation and retail sectors would benefit from those measures. - Meanwhile, private health-care companies could come under pressure as the government looks to increase salaries of public health-care workers, the analysts said. 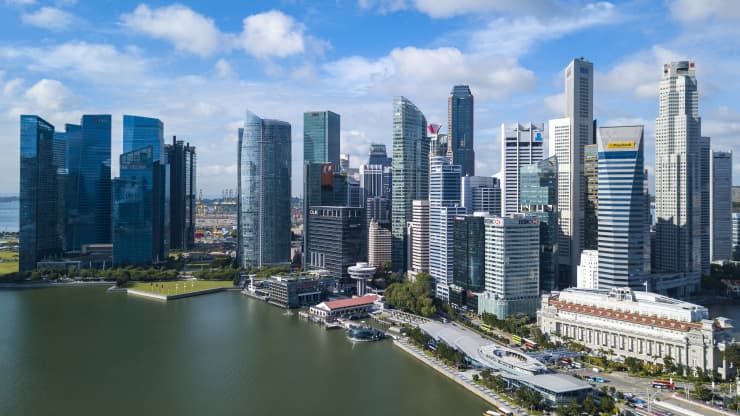 SINGAPORE — Singapore-listed stocks with exposure to the aviation and retail sectors could see a boost as a result of the government’s latest budget measures, analysts from the country’s largest bank DBS said.

They also said private health-care companies could come under pressure with the new budget, which was announced on Tuesday.

The Singapore government announced its spending plans for the financial year starting in April — which includes 11 billion Singapore dollars ($8.3 billion) to support the country’s recovery from the Covid pandemic, as well as several policies to boost revenue in the future.

DBS analysts said in a Wednesday report that some of the measures would benefit — or hurt — stocks in Singapore.

Support for aviation and tourism
In his budget speech, Deputy Prime Minister and Finance Minister Heng Swee Keat announced a six-month extension in wage subsidies for the aviation, aerospace and tourism sectors — or until September this year.

Heng also allocated another 870 million Singapore dollars in support for the aviation sector. Details of the support are scant, but the amount is “significantly larger” than what was set aside in last year’s budget, said the DBS analysts.

“Overall, these measures should help the aviation and tourism sectors weather this crisis, and perhaps emerge stronger vis-à-vis regional and global peers,” they said.

Such a development is “positive for retailers (especially brick and mortar shops) as consumers may be less motivated to channel their purchases online,” they said, adding that it will help mitigate potential threats to retail real estate investment trusts listed in Singapore.

Support for households
The Singapore government plans to spend 900 million Singapore dollars ($677.56 million) in cash handouts and other assistance for families, Heng announced.

Such measures could boost household consumption and benefit grocery retailers such as Sheng Shiong and Dairy Farm, said DBS analysts.

Pressure on health-care firms
Singapore’s government will also “enhance” the salaries of nurses and other workers in the public health-care space, said Heng.

Details of the salary increases are not yet available, but DBS said the move could put pressure on private health-care companies, such as Raffles Medical and IHH Healthcare, to increase staff costs.

Such pressure could come at a time when borders remain shut for foreign patients, an important revenue source for private health care providers in Singapore.

“That said, Singapore’s vaccination efforts and aviation support measures could hasten the relaxation of border restrictions, which could unleash pent-up demand from foreign patients sooner,” said the DBS analysts.

The bank has a “buy” call on IHH and a “hold” call on Raffles Medical.

The minister did not specify the definition of “low-value goods” in his speech, but DBS analysts said it could include household products, clothing and cosmetics bought via e-commerce sites.

The tax implementation will “increase the consumer’s price of online purchases and create a more level playing field between brick and mortar retailers and their online competitors,” the analysts explained.

Biden Isn't Planning to Share Covid-19 Vaccines With Mexico
The Biden administration isn’t considering sharing its Covid-19 vaccine supply with Mexico, White House press secretary Jen Psaki said ahead ...
Father and Son Accused of Helping Ghosn Escape Are Taken to Japan
Michael Taylor and Peter Taylor haven’t denied helping the former Nissan Motor chairman escape, but they say they don’t think ...
Covid-19 Vaccine Program in U.K. Cut Deaths, Hospitalizations
One dose reduced the risk of hospitalization among people over 70 years old by 80{0c40b82e3bfbbce465904d74cfb105d70f5bd71604b2f7a9fee4fb0464a6729e} compared with those of a ...
Former French President Sarkozy Convicted in Corruption Trial
Nicolas Sarkozy was found guilty of trying to bribe a magistrate, becoming the first president in the history of France’s ...
In Nigeria's Largest-Ever Kidnapping of Schoolgirls, Gunfire, Screams, Anguish
Days after 317 girls were taken by gunmen from a school, some of those who managed to escape described how ...
Myanmar's Aung San Suu Kyi Faces New Charges
The country’s most popular political leader, who was ousted in a military coup, is entangled in a web of legal ...