A spate of recent commentary has been warning of the vertiginous rise in China’s debt, which jumped from 148% of GDP in 2007 to 249% at the end of the third quarter of 2015. Many are anxiously pointing out that China’s debt is now comparable to that of the European Union (270% of GDP) and the United States (248% of GDP). Are they right to worry?

To some extent, they are. But while observers’ concerns are not entirely baseless, it is far too early to sound the systemic-risk alarm. As a recent HSBC report points out, the reasons for China’s rapid accumulation of debt, which is concentrated in the corporate and local-government sectors, suggest that the situation is not nearly as dangerous as many are making it out to be (Figure 1). 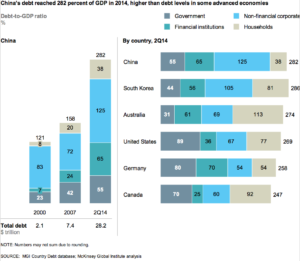 For starters, China has a very high saving rate – above 45% over the last decade, much higher than in the advanced economies – which enables it to sustain higher debt levels. Moreover, China’s banking system remains the primary channel for the deployment of the household sector’s savings, meaning that those savings fund corporate investment through bank lending, rather than equity financing (which accounts for only about 5% of net investment). Indeed, the sharp acceleration in the debt-to-GDP ratio is partly attributable to the relative underdevelopment of China’s capital market.

Once these factors are taken into account, China’s overall debt levels do not seem abnormally high. While debt might be a problem for Chinese companies with excess capacity and low productivity, companies in fast-growing, productive sectors and regions may not be in too much trouble. More generally, China has made recent progress in boosting labor productivity, encouraging technological innovation, and improving service quality in key urban areas, despite severe financial repression and inadequate access to funding by small and medium-size private enterprises.

Of course, China’s debt is still rising – a trend that, if left unchecked, could pose a mounting threat to financial and economic stability. But the structure of China’s national balance sheet suggests that it still has plenty of room to mitigate the risks that escalating debt might bring.

Thanks to China’s high saving rate, the country’s banking system had a loan-to-deposit ratio of 74% at the end of 2015, with 17.5% in required reserves held at the central bank. The capital adequacy ratio was as high as 13.2%. Given that China’s net external lending position amounts to $1.8 trillion, or 17.2% of GDP, the central bank has enough liquidity to reduce banks’ reserve requirements without resorting to unconventional monetary policy.

Furthermore, after more than three decades of rapid income growth, China has accumulated wealth (or net assets) in almost all sectors. By any standard, China’s household sector has very low leverage, with a debt-to-deposit ratio of 47.6%. Even the corporate sector’s leverage is not as high as many reports suggest. Household deposits accounted for 40.1% of total bank deposits of CN¥146.5 trillion ($22.5 trillion) at end-March 2016, while non-financial corporations comprised 32.1% and the share of government deposits was 17.1%. The combined debt-deposit ratio of the non-financial corporate sector and the government sector was 97.6%, meaning that these sectors’ total deposits exceeded their debts to the banking system by CN¥1.7 trillion.

In addition, the Chinese Academy of Social Sciences estimates that the central and local governments have accumulated net assets amounting to nearly 146% of GDP, mostly in real estate. In short, while China has a problem with inefficient capital allocation, it is nowhere near a solvency or liquidity crisis.

Nonetheless, China does need to address its domestic debt overhang. One option is higher inflation. But advanced countries have learned the hard way in recent years how difficult this approach can be, as their massive unconventional monetary policies have failed to overcome deflationary forces. With much of the world facing very low inflation, and even the possibility of outright decline in the price level, the real burden of debt has been increasing.

A second option is to issue more equity. The banking system is the wrong channel for allocating resources to high-growth, high-risk sectors, which should hold equity as risk capital. But last year’s A-share debacle – when a price rout drove the government to suspend trading in more than half of A-share companies – underscored how difficult it is to build a strong equity market when the investment culture and tax system remain tilted toward debt.

But China still has options. A substantial share of the corporations holding large debts are state-owned, and are thus more subject to policy than they are to markets. Simply put, the government has the power to bring about balance-sheet changes. The key will be to encourage the reduction of bad debts and increases in the stock of safe assets, while taxing excess capacity and encouraging innovation, thereby improving total factor productivity.

Giacomo Corneo of the Free University of Berlin has proposed that, in addition to taxing underused real estate, China should create a sovereign wealth fund to improve the management of public assets. Given that those assets amount to an estimated $18 trillion, a higher return on capital would boost GDP and reduce debt. China’s bank regulators have already permitted experiments in debt-equity swaps, which the International Monetary Fund says should be incorporated in a comprehensive strategy to accelerate reform of state-owned enterprises.

China has the savings to address its growing debt burden. Amid slowing growth, however, its window of opportunity is narrowing. The sooner China rebalances from debt to equity, the better off it will be.