European car manufacturers face fines of up to €2 billion

Several European car manufacturers have hefty fines hanging over their heads if they are unable to meet the new emission standards set by the European Union. Those with a cloud around their performance include Jaguar Land Rover, BMW, Volkswagen, Daimler, GM and Ford, all of which are not likely to meet the set targets, say researchers in a new report. Volkswagen risks a possible fine of €1 billion, and if the sustainability performance in the automotive industry as a whole cannot be raised to a higher level, then across the board fines of up to €2 billion could be handed out.

Over past years car emissions have been hot topic in politics, media and of course the automotive industry itself. Increasing expectations and demands from companies/customers have seen car manufacturers find themselves in a race to be as green as possible (or so they have claimed). To speed up the transition governments and regulators have erected all kinds of laws that require the automotive industry to reach certain CO2, and other emission targets. As such, new EU emission standards for new cars sold from 2021 require that they emit no more than an average of 95 grams of CO2 per kilometre. And, in part due to the recent Volkswagen emission test rigging scandal, a stricter emission testing standard will launch in January 2017.

From 2017 onwards Europe will work with the Worldwide Harmonised Light Vehicles Test Procedure (WLTP), a test for new cars that aims at preventing car manufacturers from abusing the previously normalised laboratory conditions. The WLTP takes place in outside, using a ‘portable emissions measurement system’ (PEMS), and the tests last longer, are carried out at higher speeds and involve more acceleration and deceleration. In addition, over the coming years, tests will also be performed that simulate real world conditions, in line with the EU’s so-called Real Driving Emissions (RDE).

The reason for this is that several tests, including checks conducted results in Germany, the Netherlands and the UK, have shown that the emission KPIs claimed by official figures are, in practice, by a long shot, not reached in real settings. Building on the test scores, critics have reached consensus in stating that manufacturers seem to be fully focussed on ensuring their cars pass the tests, but are not really interested in the emissions itself. “It is clear that car makers have a very narrow mission statement. They only want to meet the letter of the law,” said one expert.

In a bid to understand how ‘clean’ car makers are, and how ready they are for upcoming European legislation, PA Consulting Group compared the performances of carmakers in Europe to the CO2-emission regulations of European laws. The firm’s most recent analysis, which forecasts CO2 emissions and fleet weight for the coming five years, shows a very mixed picture. Peugeot Citroen (PSA), Fiat (FCA), Renault-Nissan, Toyota and Volvo, all of which have made reductions in CO2 emissions in the past, are on course to meet their individual emission requirements in 2021. However, four major carmakers – Volkswagen, BMW, Jaguar Land Rover, and Hyundai Kia – are likely to miss their targets.

Based on the situation in 2021, PSA is the best performer, followed by Fiat which has overtaken Renault-Nissan at number three. Toyota remains in fourth place and Ford, at fifth, now outperforms Hyundai-Kia which has slipped to seventh. GM has retained its position at sixth in the table. VW is ranked eighth and Volvo is ninth. Due to better performance, Daimler at tenth has overtaken BMW which is now eleventh, while JLR remains at the bottom of the rankings. 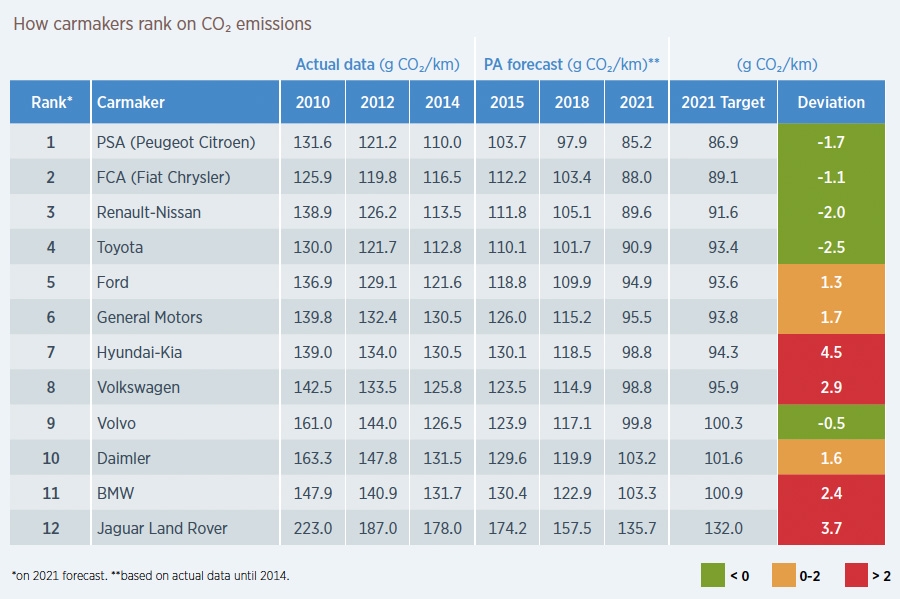 Fines
An analysis of the car fleets of automakers shows that, especially for those at the bottom of the table, the stakes are high: not meeting the regulatory requirements brings with it considerable costs. The EU plans to impose a fine of €95 for each gram of CO2 above the guidelines on manufacturers. For the specific companies, the penalty, multiplied by the number of cars they sell in 2020, could see fines handed out in the hundreds of millions of euros. Based on current sales forecasts, BMW will, according to the consultants, need to budget for approximately €100 million in fines. For Hyundai Kia and Volkswagen there are fines of €300 million and approximately €1 billion looming over their shoulders. Given the current development of the whole sector, across all companies total fines of between €1.5 billion and €2 billion are projected.

Of the car manufacturers slightly behind the curve, Daimler has booked the most progress in reducing CO2 emissions. The Germans have managed to sell more relatively smaller Mercedes, reduce the engine size of its C-class and are introducing a new gasoline and diesel platform in 2017.

BMW, on the other hand, is in the danger zone due to the relatively large sales base of heavy cars and SUVs and low sales of hybrid and electric cars. It is also expected that Jaguar Land Rover will fail to meet their targets, but because they sell relatively few cars (170,000 per year in Europe), the fines for the Brits will be relatively small. Hyundai Kia seemed for a long time to be on track to meet the 2021 targets, but following a particularly dramatic decline in performance, the carmaker is now likely to miss its target, the researchers said. The Korean manufacturer sells relatively few hybrid cars and the current petrol and diesel engines of Hyundai Kia’s are not as efficient as those of competitors, which means that Hyundai Kia remains the furthest from the 2021 targets. 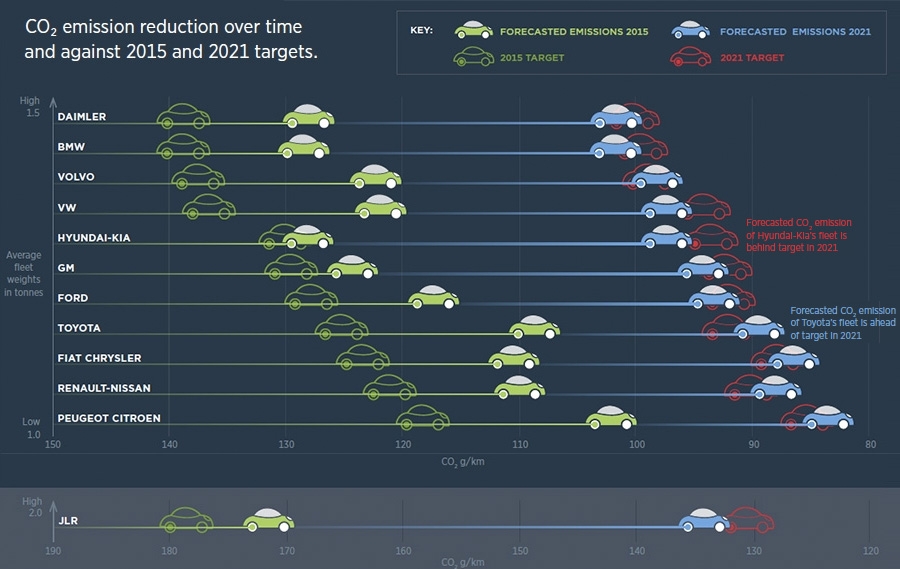 “Manufacturers are already struggling with the EU objectives, but their challenges are only just beginning,” says Thomas Gottle, automotive expert at PA Consulting Group. “Automakers must take steps to improve engine performance, to bring the vehicle weight down and revise their vehicles portfolio. This is necessary to meet lower emission targets for 2021 and avoid the risk of fines.” In addition, increase increasing the share of electric cars in the car portfolio can play a large role, if volumes pick up; the picture is mixed however as, for example, at Volkswagen, currently only 0.1% of the total sales are of electric cars.

European automakers Peugeot / Citroen, Fiat, Renault / Nissan and Volvo are on track, according to analysis from PA, to meet the stricter standards. Also the world’s largest carmaker Toyota, is already fitting relatively large CO2 reduction technologies and designs into the models it sells.