The virtual currency climbed suddenly at around 3:30 a.m. ET, adding $5,000 in the space of an hour to trade at a price of $37,299. Musk added #bitcoin to his Twitter bio earlier Friday morning and sent out a cryptic tweet, saying: “In retrospect, it was inevitable.” It adds to the wild volatility in markets this week, as the stock prices of heavily-shorted companies like GameStop surged dramatically. 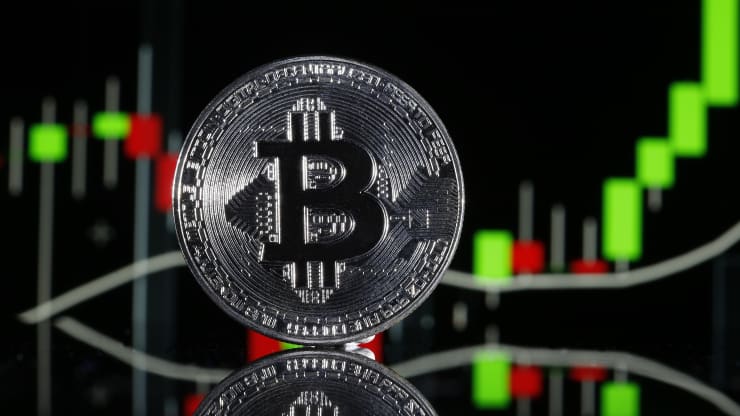 Bitcoin skyrocketed 20% on Friday after Elon Musk added the hashtag #bitcoin to his Twitter bio.

Musk added #bitcoin to his Twitter bio earlier Friday morning. He also sent out a cryptic tweet, saying: “In retrospect, it was inevitable.”

It adds to the wild volatility in markets this week, as the stock prices of heavily-shorted companies like GameStop and AMC surged dramatically thanks to a rush of amateur investors inspired by the Reddit forum WallStreetBets.

Another subreddit group, SatoshiStreetBets, led investors to pump up the price of Dogecoin, a cryptocurrency inspired by the popular “doge” meme. Dogecoin was up 800% in the last 24 hours at one point.

It’s not the first time Musk’s tweeting habits have led to a spike in the price of an asset. The entrepreneur most recently helped extend a rally in GameStop’s share price after hours Tuesday, after tweeting “GameStonk” and linking to the WallStreetBets Reddit community.

Meanwhile, shares of Poland’s CD Projekt surged as much as 12.6% Thursday after Musk tweeted that he liked the firm’s Cyberpunk 2077 game.

Musk’s addition of bitcoin to his Twitter profile comes after much speculation about whether the Tesla CEO will buy bitcoin or add the cryptocurrency to his electric car firm’s balance sheet.

The billionaire made headlines after a Twitter exchange with the CEO of software company MicroStrategy last month, after a tweet suggesting he was tempted to buy bitcoin. Along with Jack Dorsey’s fintech firm Square, MicroStrategy used its own balance sheet to buy bitcoin last year.

“If you want to do your shareholders a $100 billion favor, convert the $TSLA balance sheet from USD to #BTC,” MicroStrategy boss Michael Saylor said at the time.

In response, Musk said: “Are such large transactions even possible?”

MicroStrategy is holding an event next week titled “Bitcoin for Corporations.” When asked by CNBC’s Morgan Brenner what companies would attend, Saylor simply said there will be “thousands of executives, officers and directors and advisors of corporations.”

Biden Isn't Planning to Share Covid-19 Vaccines With Mexico
The Biden administration isn’t considering sharing its Covid-19 vaccine supply with Mexico, White House press secretary Jen Psaki said ahead ...
Father and Son Accused of Helping Ghosn Escape Are Taken to Japan
Michael Taylor and Peter Taylor haven’t denied helping the former Nissan Motor chairman escape, but they say they don’t think ...
Covid-19 Vaccine Program in U.K. Cut Deaths, Hospitalizations
One dose reduced the risk of hospitalization among people over 70 years old by 80{ebd708c5ed3603915340d48b346cc7c83889577f6b35a95f8c0758d92e4b392b} compared with those of a ...
Former French President Sarkozy Convicted in Corruption Trial
Nicolas Sarkozy was found guilty of trying to bribe a magistrate, becoming the first president in the history of France’s ...
In Nigeria's Largest-Ever Kidnapping of Schoolgirls, Gunfire, Screams, Anguish
Days after 317 girls were taken by gunmen from a school, some of those who managed to escape described how ...
Myanmar's Aung San Suu Kyi Faces New Charges
The country’s most popular political leader, who was ousted in a military coup, is entangled in a web of legal ...