500 economists were polled on the outlook for the global economy. This chart shows the results

Confidence in prospects for the global economy has been dented following Britain’s vote to leave the European Union, with a growing view that monetary policy is a fading force and many governments now need to borrow and spend, Reuters polls showed. 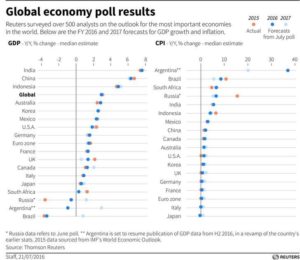 Broad worries about political risks are also on the rise everywhere and not restricted just to Brexit’s repercussions and a failed coup in Turkey. The United States is entering a period of heightened uncertainty too, leading up to November elections.

The overarching worry is this more dangerous phase is coming at an unwelcome time, when central bankers don’t have anywhere near the clout they had after the collapse of Lehman Brothers to deal with another major economic or financial downturn.

“Given how fragile the global economy is nearly eight years after the start of the global financial crisis, the last thing it needed was the type of jolt provided by the UK’s Brexit vote,” wrote Janet Henry, global chief economist at HSBC.

“We suspect fiscal policy will likely have a larger role to play in many countries from here.”

Reuters polls of above 500 economists across Asia, Europe and the Americas reveal downgrades, or at best no change to growth forecasts compared with previous months, as well as an incrementally weaker inflation across most countries.

Even in the United States, where most of the economic optimism has been focused in the developed world, there has been a slight downgrade to the growth outlook and no discernible rise in inflation expectations despite a hot job market.

The outlook for global growth this year has held at 3.0 percent, but was trimmed by 0.1 percentage point to 3.2 percent for 2017, weaker than the 3.4 percent forecast this week by the International Monetary Fund.

The Group of 20 finance ministers and central bankers will meet in China this weekend, with repercussions from Brexit and dwindling policy options expected to dominate talks.

Concerns about the inability of major economies to generate any amount of inflation have driven financial markets through wild gyrations over the past year, despite the fact U.S. stocks are now near record highs and sovereign bond yields are near record lows almost everywhere.

Expectations for further easing from the Bank of England and the Bank of Japan as well as the European Central Bank have calmed financial markets somewhat and are likely to reinforce the existing trend toward higher equity and bond prices as the extra cash has to go somewhere.

Time to turn on fiscal taps?

A majority of economists polled from around the global said developed economies that can should now ramp up their fiscal spending, as Canada and Japan have done recently.

Asked which countries needs to opt for some form of fiscal expansion in the next six months, most economists chose major European countries, many of which are currently pursuing austerity measures. Germany was the top pick.

Growth across much of the rest of the world is forecast to be uninspiring.

Britain’s economy is expected to slide back into recession in the coming year following its vote to leave the EU, pushing the Bank of England to cut interest rates and restart its printing presses next month.

With a still-subdued economic outlook for the largest economies in the euro zone and the added uncertainty of Brexit, the European Central Bank is likely to extend and alter its asset purchase program, possibly by September.

The Bank of Japan in an attempt to boost inflation is expected to ease policy later this month. That would double up with Shinzo Abe’s plan for fresh round of fiscal stimulus following an election win in the upper house.

Emerging market economies are not expected to fare much better, either. South Africa looks to remain gripped by weak growth and persistently high inflation, while Brazil, in a much worse kind of mess, is predicted to escape recession next year.

China’s economic growth is expected to cool to 6.5 percent this year and 6.3 percent in 2017, even as the government steps up fiscal spending and the central bank loosens policy further to prevent a sharper slowdown.

India is one of the few exceptions in emerging markets with a stable outlook, and is likely to maintain a faster growth rate than China over the next few years.

“India has settled into a comfortable stride. Growth looks impressive, even if that’s not always matched by feelings on the ground,” wrote Pranjul Bhandari, chief economist, India at HSBC.