Why is China’s growth slowing? 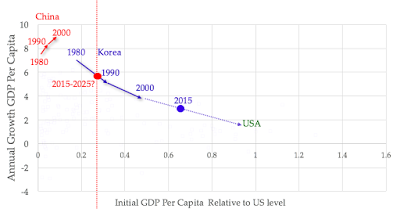 Let’s frame these questions in the traditional model economists use to look at growth rates of emerging and low-income economies: the convergence model (based on the work of Robert Solow). The main prediction: countries that are lagging have more opportunities for investment and they are likely to grow faster than countries at the technology frontier. Because of faster growth rates we expect to see convergence in GDP per capita. As convergence happens, growth rates will naturally slowdown to reach those of the countries at the frontier. [The theory also states that not all countries might converge to the same level of GDP per capita but let’s ignore that for a second and focus on the predictions of relative growth rates.]

Start with an example that nicely validates the theory: South Korea. Let’s plot the level of GDP per capita of South Korea relative to the US at the beginning of each of the last three decades and then compare it to the growth rate of GDP per capita during the years that followed [I will treat the 2000-2014 period as the “decade of the 2000s”]. 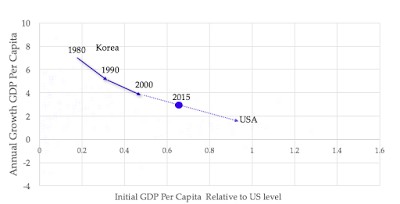 The plot above (click on it for a larger picture) shows that South Korea starts in 1980 with a level of GDP per capita below 20% of the US leading to annual growth during the 1980-90 period of about 7%). This allows the country to reach a level of 30% relative to the US by 1990. At that point growth is decelerating and during the next 10 years it goes below 5.5%. The transition continues with decelerating growth during the next decade (around 4%). Today South Korea has a GDP per capita of about 65% of the US level and it is likely that over the coming years we will see a further slowing down of its growth rate as it continues its convergence towards the US.

So far so good for our theory. How about China?

In 1980 China starts at a much lower level of GDP per capita and, consistently with our logic, a very fast growth rate of about 7%. But as the country converges towards the US growth rates accelerate to above 8% during the 90s. One potential explanation for this acceleration is that China was moving towards a more natural growth rate given how low its GDP per capita was relative to, say, South Korea. But the next decade  (2000-2014) will bring yet one more increase in growth rates towards 9%. At that point the growth rate looks spectacular compared to the case of South Korea. To put it in perspective, by 2015 China has reached a level of 25% of US GDP per capita (the vertical red line) and when South Korea had reached that level it was already growing at less than 6%. The comparison to South Korea makes clear that growth rates of 8-9% in China given its current development would have looked like a true miracle.

What if South Korea is used to benchmark future Chinese growth rates? Given the current GDP per capita of China, we are looking at a growth rate of slightly below 6% over the next decade. And a growth rate that will decelerate further as time passes. This number is slightly lower than the current target of the Chinese government, but not far given that we are talking about 10 years in a path that is likely to be one of decelerating growth rates. [Note that the growth rates above are in per capita terms. Working age population is currently not growing much in China so the GDP figures should not be too different].

Final question: is South Korea a good benchmark for China? Let’s look at other potential fast-growing economies during the same years. 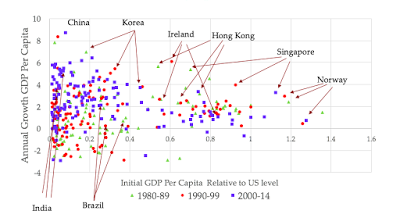 South Korea is clearly the best performer in the range of countries that are below 50% of the US GDP per capita (and, yes, there are plenty of failures!). So using South Korea as a benchmark is providing a very optimistic case on Chinese growth. There are a few other countries that look like outliers (from above) in this relationship but it is unclear that they are relevant examples for China. Hong Kong and Singapore are small city states. Ireland in the 90s is a very unique decade for a European country, and oil producing countries (such as Norway) have dynamics that cannot be replicated without that level of natural resources.

In summary, the deceleration of GDP growth rate in China seems like a natural evolution of the economy as it follows its convergence path. Growth rates around 6% still put China as the best performer among all countries in the world, conditional on its level of GDP per capita. There are plenty of other countries in the world that show China what low growth rates of GDP really look like. And they might be an example of what could happen to the country if it cannot keep its policies and institutions among the best in class for its current level of development.