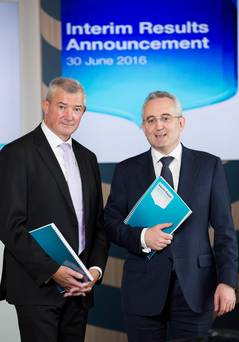 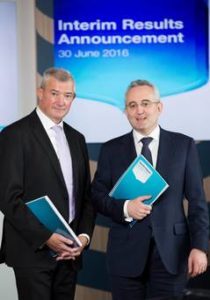 Bank of Ireland has cast doubts on the timing of its dividend to shareholders, with the Brexit vote partly to blame.

Chief executive Richie Boucher stressed the lender is still committed to a shareholder payout, but said the certainty he had earlier this year concerning the timing was not as strong.

Chairman Archie Kane said at the bank’s annual meeting in April that the organisation remained committed to paying a dividend next year, although he suggested that this would be determined by a number of external factors, including Brexit.

In the wake of the bank’s interim results yesterday, Mr Boucher said the timing was no longer as clear.

“What’ve we said is the Brexit impact… has had some impact on our capital ratio, but also the economy is a little bit uncertain so I’m just saying we need to temper that,” Mr Boucher said.

“The visibility we had is a little bit more cloudy than what it was in early spring. We’re not taking it off the table.”

Mr Boucher said that while the bank was being cautious over the fallout from Brexit, there was no immediate impact.

He said staff were in close contact with the bank’s customers in border areas, as the bank has a €100m exposure to retailers in the border counties. The bank also has mortgages worth around €1bn.

“Our anticipation is that our customers who are more involved in exports to the UK or in the border regions, they might earn less money, a bit like us, but they’re not in peril.”

Underlying pre-tax profit fell nearly 25pc at the bank in the first half of the year –coming in at €560m.

Davy analysts Diarmaid Sheridan and Emer Lang said the underlying pre-tax profit beat expectations by 5pc. New lending at the bank was up 14pc on the first half of last year at €6.9bn, the bank said.

Its financial statements show falls in net interest income and operating income, and a rise in operating expenses (before levies and regulatory charges).

The bank’s net interest margin (NIM) – an important measure of performance that shows the difference between interest take in and interest paid out – fell from 2.21pc to 2.11pc.

In terms of the bank’s mortgage offering, Mr Boucher said the focus was on fixed rate, even though the bank will take “political flack”.