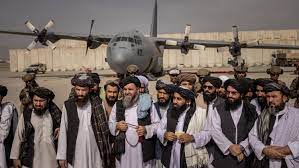 What does the defeat of the US system in Afghanistan show? Can war-torn Afghanistan achieve peace and independence? Where is the way out for Afghanistan?

This unfortunate country has become a battleground for the great powers and the hegemonic policy has led to unrest, war and devastation in Afghanistan for 42 years.

Afghanistan is the “crossroads of the Asian continent”

Let us look at the world map. Afghanistan is located in the hinterland of the Eurasian continent. It is the point of convergence of West Asia, Central Asia, South Asia and East Asia. It also borders on China through a long, narrow piece of land. From the viewpoint of geopolitical theory, Afghanistan is known as the “crossroads of the Asian continent” because it holds the key points between the hinterland of Asia and the Middle East, besides being the plateau overlooking the Middle East and looking towards East Asia, and has always been at the centre of the great powers’ appetites.

All powers are convinced of the validity of the geocentric theory of British geopolitician Halford Mackinder (1861-1947), who believed that whoever controlled those areas would be able to dominate Asia and the Eurasian continent: indeed, Afghanistan is precisely there.

Historically, from the United Kingdom to the Soviet Union and the United States of America, the countries with hegemonic ambitions came to that land and brought endless wars.

Since the late 1970s, the game of great powers and internal State conflicts have caused forty years of bloodshed.

In October 2001, the United States launched a war in Afghanistan, overthrowing the Taliban regime in the name of fighting al-Qaeda. In the last twenty years, the United States has invested a lot of resources in Afghanistan. It has supported the Afghan government established by the White House and has trained a local army in the country. It has also tried to make Afghanistan – outside of any historical, social and religious logic – a “model democratic country” according to their wasp style: in short, it has tried to impose a Lutheran model on an Islamic country.

The consequences in terms of the lives human of the war

Over the past two decades, nearly 2,500 US soldiers have been killed on the battlefield in Afghanistan and tens of thousands of people, including military service providers, have been wounded. The total cost of the war has exceeded two trillion US dollars. Under the banner of “counter-terrorism”, the long war has not only plunged the United States into a quagmire of lack of international credibility and doubts about its methods of conducting war, civilisation and democracy, but – even more severely – it has caused great disasters to a people far removed from it in every sense.

According to the ‘War Cost Accounting’ project at Brown University in the USA, at least 47,245 Afghan civilians were killed in that war from 2001 to mid-April 2020. According to the figures released by the United Nations, the war in Afghanistan has forced 2.7 million Afghans to flee abroad and has resulted in the internal displacement of four million Afghans, with a total population of 39 million.

Besides leading to humanitarian disasters, increased poverty caused by the war afflicts the population. Figures show that since the fiscal year 2019-2020, Afghanistan’s gross domestic product has been about 18.89 billion US dollars and GDP per capita only 586.6 US dollars. The finances of the former Afghan government had not managed to balance the books for many years and 60% of the fiscal budget came from international aid.

In the continuing war bloodshed, the United States of America tried in vain to remedy the situation and lost its white man’s burden to stop the bleeding.

On the day the Taliban entered Kabul, a number of US politicians spoke out and publicly criticised the government’s decision to hastily withdraw troops from Afghanistan and said that the United States should be held responsible for the current situation in Afghanistan. The former mayor of New York, Rudolph Giuliani, stated in an interview with RAI on September 10, 2001 that the United States of America should stay and rule the country directly. We can also add: just like a colony.

On August 15, Republican Congresswoman Liz Cheney said in an interview with ABC that the White House bore an inescapable responsibility for the Taliban’s fast conquest of Afghanistan. She said that the impact of the current situation was not limited to Afghanistan and her country, but would also affect international relations. Liz Cheney also stated that the US withdrawal did not actually end the war in Afghanistan, but would make it continue in other ways.

Indeed, the current turbulent situation in Afghanistan is closely related to the US hasty withdrawal from the country.

On April 14, 2021, President Biden announced that he would withdraw 2,500 US troops from Afghanistan before September 11, 2021, marking the 20th anniversary of the terrorist attack on the Twin Towers. On the evening of the same day, NATO Secretary General Stoltenberg also announced that some seven thousand NATO coalition troops would be withdrawn at the same time.

When US and NATO troops officially started their withdrawal on May 1, the security situation in Afghanistan worsened by the day. According to The New York Times, from April 30 to May 6, forty-four civilians had been killed in the attack in Afghanistan in a single week, the highest number of people in a week since October 2020.

The exportation of the democracy

This proves once again that the US practice of bringing “democracy” to other countries with the use of weapons, harms the others and the USA itself and can only bring disorder and unrest.

The United States of America has continuously created chaos and with “friendly fire” and “by mistake” has killed civilians in Afghanistan for 25 years. The minimum positive impression the Afghan people had has been completely wiped out. It existed only in a few Hollywood movies at the beginning of the 2000s, with the classic child and wise old man saved by the US good soldier.

For any sovereign country, such behaviour can only be hegemonic and ruthless.

The twenty-year US war in Afghanistan has not achieved its goals: the United States has only tried to save face through an irresponsible withdrawal. This is tantamount to saying: “I would prefer a 3-0 defeat by default than a 7-0 defeat on the pitch”.

The war was costly, in view of vainly conquering the strategic position towards Mackinder’s heartland that holds the last raw materials on the planet.

The tragedy in Afghanistan is just another great failure of the Western attempt of imposing democracy through violence.

It is difficult for a country with great historical traditions to be transformed and assimilated by the West; it develops antibodies of resistance and rejection. The efforts to “democratize” Afghanistan, Iraq, Libya, Syria, etc. have turned these countries into guinea pigs of the US liberal utopia. These guinea pigs, however, have not died, but have somehow managed to escape vivisection and laboratory tests.

The Taliban won in Kabul with a ten-day blitz: the “US democracy” was the Maoist “paper tiger”, which had already been driven out by China, the Democratic People’s Republic of Korea, Vietnam etc.

Such a speed of advance makes the previous military organisation and US bases seem completely useless and disastrous. According to reports, on August 15 President Biden and senior US officials were shocked.

Not long before, President Biden had claimed that the Afghan government had 300,000 well-equipped soldiers, while the Taliban had only 75,000. While recalling Vietnam, President Biden said: “Under no circumstances will we see people evacuated from the roof of the US embassy in Afghanistan”.

President Biden’s declarations, however, were the “famous last words”. When the US military helicopter landed on the roof of the US embassy in Afghanistan to pick up besieged fellow citizens, people thought of the Saigon tragedy. Indeed, Afghanistan is only the most recent Saigon-style tragedy, but it will certainly not be the last.

The Taliban’s quick offensive regards their strategy. It is very appropriate and they know how to use negotiation skills in battle simultaneously to struggle with the opponents while fighting them. A very strong traditional strategy inherited from the legacies of the wars of liberation against the Brits in the 19th and 20th centuries, which saved them from ending up like India, or at least the western Muslim part later called Pakistan. As you can see, it all adds up.

The US-backed Afghan government and army were made up of generally corrupt, incompetent and opportunistic personnel. They gradually surrendered to their compatriots, preferring past enemies to the US promises to escape to the paradise on earth of democracy.

High officials and star-spangled Afghan military officers left their posts without authorisation and had no thought at all of maintaining a regime which, on its cessation, would be saved only at the highest ranks, so as not to be treated like Mohammad Najibullah, captured by the Taliban in the UN headquarters in Kabul and shot on September 27, 1996.

Corruption is one of the causes of the US defeat. Brainiacs, eggheads and the US think tanks at Harvard, Columbia, Stanford, Yale, or in other places, have not yet understood that when you go to a country that is distant in every sense from your own – a country and a people that you despise so much that you want to change them “for their own good” – only corrupt, delinquent, ignorant and opportunistic people will come with you as occupier. The same people who were already largely despised by the local people. The Taliban speed of advancement has demonstrated to what extent the above is true.

The political-administrative concept – with which a military umbrella Afghanistan-Eden was designed – was based on liberal and “democratic” assumptions that were incompatible with the Afghan society.

Not only could that government not represent the Afghan people, but it further fuelled corruption and inefficiency because it relied on a large amount of international aid.

The “design” of the former Afghan government system could neither draw sufficient human resources (i.e. credibility from its people), nor gain effective control of the country (people enlisting only for a clean uniform and a few dollars to support their poor families).

On the contrary, after twenty years of armed struggle, the Taliban have made many reshuffles at the top leadership, as well as reorganisations. They have limited their radicalism and learned some lessons and positive practices during the war.

Today, an Afghanistan that stops wars and achieves peace is the common expectation of the international community and the countries of the region and the planet.

Respecting Afghanistan’s independence means not interfering in its internal affairs and not exporting the so-called democracy. Only in this way can peace and development be achieved in this war-torn country.

Afghanistan belongs to the Afghan people alone. Imposed “democracy” is always overthrown because it does not suit the wishes of the people it seeks to subjugate.

A peaceful and stable Afghanistan will remove the obstacles to regional security, stability and development cooperation and create favourable conditions for seeking cooperation with other countries and achieving a win-win situation.

Sudan Coup Draws Thousands to the Streets in Protest
Pro-democracy protesters streamed into the streets of the capital to reject a military coup of the transitional government that has ...
Amnesty International Exits Hong Kong, Citing National Security Law
The organization plans to pull out of the city by the end of the year, marking one of the most ...
Australia Considers New Privacy Rules to Protect Children on Social Media
Australia’s government on Monday released draft legislation that would enable the creation of a binding online-privacy code for tech companies ...
SolarWinds Hackers Step Up Attacks on Tech Companies
The Russia-linked hackers behind last year’s compromise of a wide swath of the U.S. government and scores of private companies ...
Australia Backs $1.6 Billion Buy of Pacific Mobile Networks
The Australian government is financing the purchase of mobile networks in six Pacific countries, a move that foreign-policy experts say ...
Turkey's Erdogan Threatens to Expel 10 Western Ambassadors, Including U.S. Envoy
The diplomats had recently called for the release of a Turkish philanthropist who has been jailed since 2017. If carried ...