Sterling hits $1.40 for the first time in nearly three years

- The U.K. suffered its worst economic downturn for more than 300 years in 2020, but its accelerated inoculation program has seen more than 16 million people receive the first dose of a coronavirus vaccine. - Despite nationwide lockdown measures having been in place since the turn of the year, economists are hoping for a swift recovery later in the year. 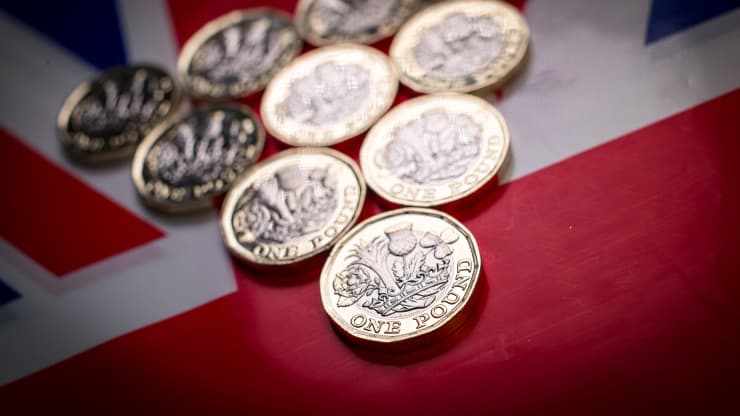 Trump’s Economic Recovery Is On Shaky Ground
Forget Berlin, Lisbon wants to become the start-up capital of Europe
What is the European Union?

LONDON — Sterling reached $1.40 against the U.S. dollar for the first time since April 2018 on Friday morning.

The dollar has been in decline on the back of a weak U.S. jobs report Thursday, while the pound is reacting positively to the U.K.’s uniquely successful Covid-19 vaccination rollout.

The U.K. suffered its worst economic downturn for more than 300 years in 2020, but its accelerated inoculation program has seen more than 16 million people receive the first dose of a coronavirus vaccine.

Despite nationwide lockdown measures having been in place since the turn of the year, economists are hoping for a swift recovery later in the year.

The U.K.‘s flash composite PMI (purchasing managers’ index) reading for February, which combines both services and manufacturing activity, came in at 49.8 on Friday, up from 41.2 in January. Any figure below 50 represents a contraction, but this month’s was much more slight than anticipated.

By contrast, U.S. initial unemployment filings totaled 861,000 last week, according to a Labor Department report Thursday, the highest level in a month and significantly exceeding the Dow Jones estimate of 773,000, prompting concerns about the pace of recovery stateside.

U.K. Prime Minister Boris Johnson is expected to deliver an update on the government’s plan to combat the pandemic on Monday, which could involve a slight easing of the current strict lockdown measures.

UBS foreign exchange strategist Gaétan Péroux said that besides being a currency that typically reacts well to reflationary environments, sterling is being supported by two domestic stories.

“First, COVID-19 cases, hospitalizations, and deaths are falling, and plans to reopen the economy in the not too distant future are firming up. Second, markets are still adjusting to the fact that the Bank of England is now unlikely to implement negative rates, leading to a narrowing of the U.S.-U.K. 10-year yield differential,” Péroux said.

Sterling also climbed almost 0.3% against the euro on Friday morning.

Biden Isn't Planning to Share Covid-19 Vaccines With Mexico
The Biden administration isn’t considering sharing its Covid-19 vaccine supply with Mexico, White House press secretary Jen Psaki said ahead ...
Father and Son Accused of Helping Ghosn Escape Are Taken to Japan
Michael Taylor and Peter Taylor haven’t denied helping the former Nissan Motor chairman escape, but they say they don’t think ...
Covid-19 Vaccine Program in U.K. Cut Deaths, Hospitalizations
One dose reduced the risk of hospitalization among people over 70 years old by 80{69bbeabab11eae980d916f40a8615dbd6a15f258ecac47d18af66e62fb22a3e9} compared with those of a ...
Former French President Sarkozy Convicted in Corruption Trial
Nicolas Sarkozy was found guilty of trying to bribe a magistrate, becoming the first president in the history of France’s ...
In Nigeria's Largest-Ever Kidnapping of Schoolgirls, Gunfire, Screams, Anguish
Days after 317 girls were taken by gunmen from a school, some of those who managed to escape described how ...
Myanmar's Aung San Suu Kyi Faces New Charges
The country’s most popular political leader, who was ousted in a military coup, is entangled in a web of legal ...