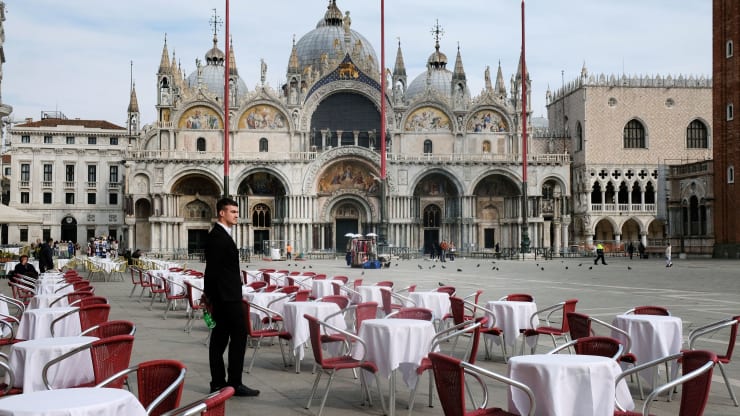 European banks are under intense pressure as the coronavirus halts all major economies, at a time when these institutions were still struggling with the legacy issues of the 2008 financial crash.

The region’s lenders have undergone a massive transformation since 2008 by increasing capital positions and complying with tougher regulations. They have, nonetheless, struggled to return to their pre-crisis market levels. The European banking index was still down by more than 50% from March 2008 to the start of this year. Virus-fueled selling in global markets means that the same index is now down 70% from March 2008.

One of the main legacy issues from the crisis is the level of bad loans — which includes loans where the borrower is in default. The latest figures from the European Banking Authority (EBA) show that as of June of 2019, the weighted average ratio of non-performing loans stood at 3%, in comparison with 6% in 2015.

However, the coronavirus outbreak is expected to exacerbate that level of bad loans in banks’ balance sheets, given that many small and medium-sized businesses have been forced to close and will struggle to repay their debts.

“The banking sector seems to be better equipped to deal with shocks than back in 2008 if we look at capital ratios,” Maartje Wijffelaars, economist at Rabobank, told CNBC via email.

“That said, in most euro zone member states, non-performing loan ratios are still higher than back in 2008, even though they have come down substantially since their peak,” she added.

Deutsche Bank, the embattled German lender, said Friday that the coronavirus outbreak is likely to hurt its financial targets for the year.

“We may be materially adversely affected by a protracted downturn in local, regional or global economic condition,” Deutsche Bank said in a report. The bank also said that it’s hard to forecast the full extent of the impact at this stage.

Credit Suisse also said this week “the impact of the pandemic on our financial results going forward remains difficult to assess,” but it’s monitoring its “credit exposures” as the virus spreads further.

Another legacy issue that banks face is low interest rates. The European Central Bank (ECB) has kept interest rates at record low levels since the height of the sovereign debt crisis of 2011. European lenders have complained on different occasions that this keeps denting their profits.

In addition to their long-standing problems, the virus is also creating new challenges.

Italy, Spain, France and Belgium are just some of the countries in Europe which are in total lockdown. This means that business activity is sharply lower. People are not going out, schools are closed, and self-employed workers may have less income. Airlines have stopped most of their activities and the entire tourism industry, from hotels to museums, is at a standstill.

“With most of Europe in lockdown, declines in business activity and demand in the euro area are likely to prove at least as sharp as those experienced during the global financial crisis,” Davide Oneglia, economist at the research firm TS Lombard, told CNBC.

“We think the risks of a credit crisis remain elevated in the euro area. This would not let banks off the hook,” he said, despite recent stimulus measures by the ECB.

The central bank is purchasing public and private bonds totaling 750 billion euros ($802 billion) this year to reduce the economic impact of the virus. Governments across the euro area have also stepped up their support to households and firms.

However, without a clear end in sight, both the ECB and individual governments might have to open the taps even more to deal with the outbreak.

Intel Slips, and a High-Profile Supercomputer Is Delayed 165