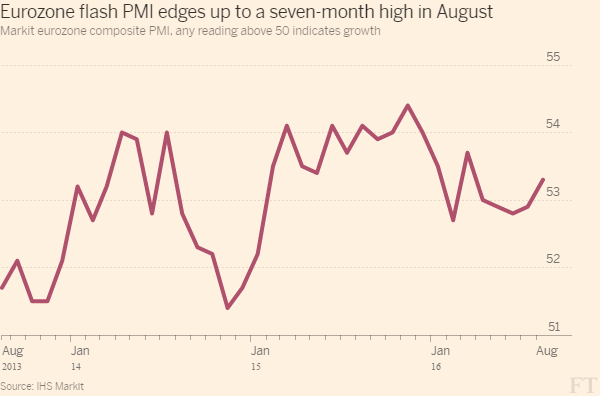 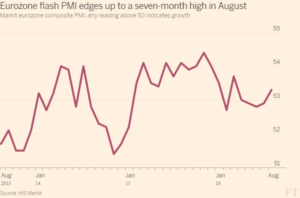 The eurozone showed little sign of suffering a post-Brexit slump over the summer, with an influential poll of purchasing managers at the region’s companies hitting a seven-month high in August.

The PMI, which is closely watched by economic policymakers in the single currency area, hit 53.3 this month — up slightly from 53.2 in July. The bright headline figure belied a slowing in the growth of manufacturers’ order books and a lower rate of new hires on the back of a drop in optimism in the region’s dominant services sector.

The publication of the index comes ahead of an important meeting of top European Central Bank officials in September, when its governing council could announce an extension to its bond-buying programme or other measures to boost growth and inflation.

“The August flash PMI indicates that the eurozone remains on a steady growth path in the third quarter, with no signs of the recovery being derailed by ‘Brexit’ uncertainty,” said Chris Williamson, chief business economist at IHS Markit.

“While the resilience … will add to the belief that the ECB will see no need for any immediate further stimulus, the weakness of the overall pace of expansion and disappointing trends in hiring, order books, business optimism and prices all suggest that policymakers will keep the door open for more stimulus later in the year.”

A sub-index for price pressures suggested inflation remains muted, with selling prices falling again this month. Inflation in the region is now 0.2 per cent, much lower than the ECB’s target of just under 2 per cent.

“Clearly, the fact that the eurozone PMI has not fallen in the two months following the UK’s Brexit vote will be welcome news for policymakers. But growth remains too sluggish to push core inflation back to the ECB’s target,” said Stephen Brown, European economist at Capital Economics, a research firm.

“Today’s release does little to alter our view that the ECB will increase the pace of its asset purchases and extend the programme at its next meeting on September 8.”