A cabin on the moon? China hones the lunar lifestyle 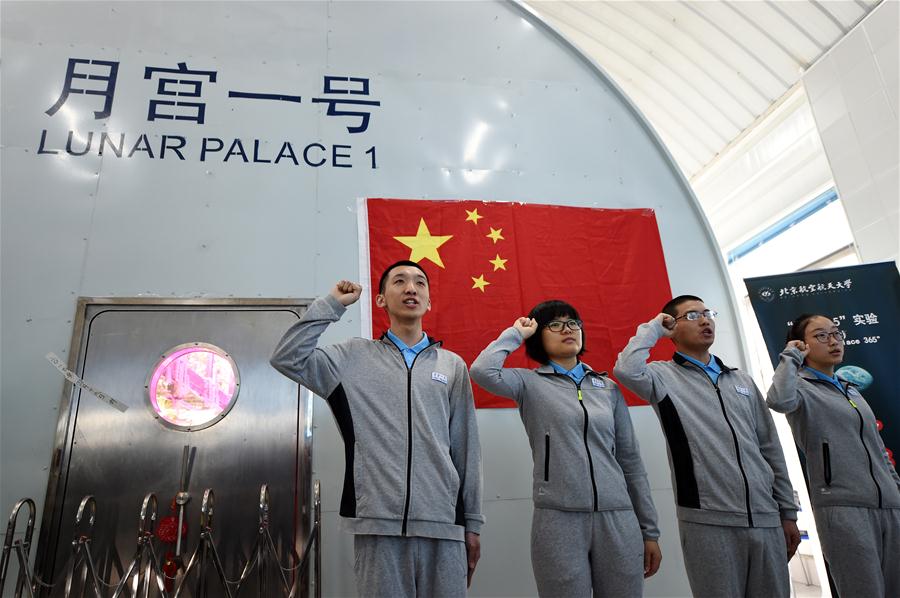 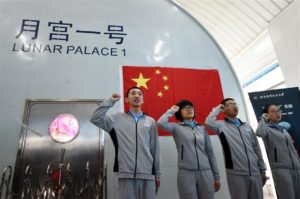 Four volunteers take the oath in front of the Lunar Palace 1, a facility for conducting bio-regenerative life-support systems experiments key to setting up a lunar base, in Beijing University for Aeronautics and Astronautics (BUAA) in Beijing, capital of China, May 10, 2017.

BEIJING – While it remains unclear exactly how long China’s first lunar explorers will spend on the surface, the country is already planning for longer stays.

Eight Chinese volunteers will live in “Yuegong-1,” a simulated space “cabin” in Beijing for the next year, strengthening China’s knowledge and technical know-how, and helping the country’s scientists understand exactly what will be required for humans to remain on the moon in the medium and long terms.

The volunteers, all civilians and elite postgraduate students from Beihang University, are divided into two groups. The first four stepped into Yuegong-1 on Wednesday. The two men and two women will stay in the cabin for 60 days, then be replaced by the second group, also two men and two women, who will stay there for 200 days. After that, the first group will return for the remaining 105 days.

The experiment, code-named “Yuegong-365,” is Beihang’s second attempt to see how the Bioregenerative Life Support System (BLSS) works in a moon-like environment. A successful 105-day trial was conducted in 2014.

The BLSS is a system where animals, plants and microorganisms co-exist. Water and food can be recycled in the system, creating an earth-like environment.

“The BLSS is absolutely crucial to probes to the moon and to Mars,” said Liu Zhiheng of the Chinese Academy of Sciences. “The latest test is vital to the future of China’s moon and Mars missions and must be relied upon to guarantee the safety and health of our astronauts.”

Liu Hong, chief designer of “Yuegong-1,” said that the purpose of the new program is to test the stability of the BLSS when astronauts with different metabolic rates take turns to live in the cabin and when they face sudden situations such as blackouts.

“Yuegong-1” consists of a major living space and two plant cabins: “greenhouses.” The major cabin covers 42 square meters the size of a very small urban apartment while each of the plant cabins is 3.5 meters high and 50 to 60 square meters in area. The major cabin hosts four bed cubicles, a common room, a washroom, a waste-treatment room and an animal-raising room. The system allows four “astronauts” to conduct research while their basic needs are met.

After Gaza's Deadliest Day, Israel Says It Is Targeting Hamas Tunnels
Israel launched more airstrikes in the Gaza Strip targeting what its military said was a tunnel network used by Hamas, ...
EU Suspends Plans to Raise Tariffs on U.S. Whiskey, Other Goods
In a joint statement, the U.S. and EU said they would begin formal discussions to address problems plaguing the global ...
China's Economic Recovery Slowed in April
The pace of growth in China’s economic activity slowed in April as retail sales missed expectations, complicating the picture of ...
Gray Whale Becomes Stranded in Mediterranean
Researchers say that receding Arctic sea ice might have confused the whale during its annual Pacific migration.
In Russia, Alexei Navalny's Allies Fight to Stay Afloat
With the Kremlin critic jailed and key aides exiled or under house arrest, his supporters are struggling to find a ...

All eyes are on this inflation number, which could have the biggest gain in nearly a decade 178