Is it time to ditch bonuses?

The connection between executive compensation schemes and performance was brought into sharp focus again in November 2015 when Deutsche Bank’s co-chief executive John Cryan said that bonuses do not encourage banking executives to work harder.

He specified that bankers shouldn’t be rewarded as entrepreneurs, highlighting the underlying belief that bonuses may not drive the behaviours they are intended to. How accurate is his statement?

The theory behind bonuses

Alignment, or the perfect match, is achieved when executive compensation is materially linked with shareholder return through stocks or equity – what is technically known as managerial ownership (equity owned by executives).

The logical conclusion of this theory is that by increasing how much equity an executive has in a firm, you also boost the executive’s – and therefore the firm’s – performance. According to this argument, firms with equity-based or results-driven compensation schemes should outperform their counterparts without them.

To better understand these equity-based or results-driven compensation schemes, in 2014 I developed a thesis at the London School of Economics to find links between executive compensation and performance.

To ensure the best possible outcome, my sample needed to represent a business context where managerial ownership is used as a key way of compensating staff and boosting their performance. I chose to focus on private equity-backed buyouts.

Often favoured over bonuses, private equity-backed buyouts use managerial ownership as a main form of compensation. Research using a sample of 76 management buyouts found that managerial ownership percentage increases by a factor of four when the companies turn private. 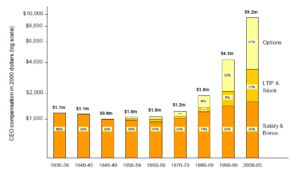 Several authors have explored the relationship between managerial ownership and operating performance but, surprisingly, the scope of findings does not allow for any definitive conclusions.

There are three key studies on this matter that seem to contradict agency theory, raising doubts on the key premise grounding our general understanding. One of those studies, based on a sample of 283 companies, intersected adjusted levels of operating performance with managerial ownership, both in the years after the initial public offering (IPO) and the first 10 years before the IPO. No relationship was found between operating performance and managerial ownership.

Another piece of research, based on 223 firms, found no statistically significant correlation between ownership structure and firm performance.

In parallel, some studies arguing that there might be a correlation show that the causality between managerial ownership and operating performance has evolved throughout the years to non-linear analysis, making it difficult to draw any linear conclusion.

Building on the existing research

I decided to complement this research by interviewing senior industry executives from private equity across different regions.

The same level of disagreement was found when these executives were asked about the relationship between managerial ownership and operating performance. As one of them told me, “managerial ownership does not solve the agency problems. If an executive makes $20 million on stock valuation in one year, he is a very wealthy individual no matter the rate of return measured from his own work or capital. But if a private equity firm does not achieve a return on equity above industry average, it has a problem. The personal wealth of executives and firms are different concepts measured in different ways.”

Owning stocks, as this senior executive highlights, does not mean the executive’s level of ambition will be the same as that of their firm, since the opportunity cost of capital between the two will always be different. So, if it is not possible to clarify the personal ambition of each executive, how much equity should the firm give away to executives in order to align incentives?

How much is too much?

The senior executives I spoke to from the world of private equity who either use managerial ownership or benefit from it explained that management-owned equity has increased, reaching 10% of the equity in some cases.

For these executives, managerial ownership is considered to be a way to align incentives. This is what one executive working in an Azerbaijan manufacturing company acquired by the major local private equity firm told me: “Salaries were reduced and managerial ownership increased, which guided managers to be more aggressive in cost-cutting programmes.”

If the convergence of interest between shareholders and executives through the use of managerial ownership cannot be proven or is at best based on a highly controversial hypothesis, why should the convergence happen when bonuses, rather than equity, come into play?