Which are the world’s most expensive cities?

Draghi Confronts Limit of His Powers as Latvian Standoff Endures
The European Central Bank is launching proposals for a ‘digital euro’, here’s why
La Bce mantiene i tassi d’interesse a zero

Singapore tops the list as the most expensive city for the third time in a row, but in a year when costs around the world have been highly volatile.

The Economist Intelligence Unit (EIU) produced its Worldwide Cost of Living 2016 report, ranking countries based on the cost of various products and services.

Two United States cities have seen significant increases in costs, with Los Angeles rising 19 places to enter the top 10. New York City, now ranked seventh, has gone up 15 places since last year. It has seen a big jump in costs over recent years, moving up 42 spots since 2011. 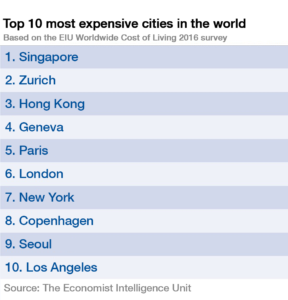 Japanese cities have seen a lowering of costs, despite being some of the most expensive cities over the past 20 years, Tokyo and Osaka have dropped to 11th and 14th place, respectively.

Paris is the only Eurozone country featured in the top 10, and sees a drop of three places, which the report says may be due to falling confidence in the euro. Other European cities have seen increases in costs, pushing them up the rankings. London rose five points, bringing it into the top 10.

Jon Copestake, an editor of the survey, noted that 2015 was the most volatile year he had seen in 17 years of working on the report. “Falling commodity prices have created deflationary pressures in some countries, but in others currency weakness caused by these falls has led to spiralling inflation.”

At the other end of the ranking, India is home to many of the world’s cheapest cities. Bangalore is the second cheapest city, followed by Lusaka in Zambia, which has seen a drop of 22 places to become the cheapest city.

The survey discusses projections for going forward: “The cost of living is always changing and there are already indications of further changes that are set to take place during the coming year.” Crucially, they note, instability and conflict around the world could continue to drive inflation and affect the costs of living within certain cities.

Emerging economies are likely to continue to see growth, becoming relatively more expensive. However the Chinese growth slowdown could “prompt a new wave of consumer caution”, driving down spending and undermining price inflation.

Israel and Sudan Agree to Revive Peace Deal
Israel said a signing ceremony to normalize relations could take place in Washington in a few months, after Sudan establishes ...
Russia Claims Gains in Battle for Bakhmut
Russian forces said they had made new advances in their effort to encircle the eastern Ukrainian city, while European leaders ...
Global Minimum Tax Deal Advances
International officials are moving ahead with their tax increases while giving U.S. companies a temporary break from some increases in ...
How a Radioactive Capsule Was Lost and Found in the Australian Outback
Authorities now want to know how the tiny cylinder shook loose from a truck and whether anyone is to blame.
Fears of Losing Out to China Put U.S. Under Pressure Over Kenya Base
Kenya is asking the U.S. to pay for the expansion of a joint counterterrorism base, raising concerns in Washington that ...
U.S., Philippines Strike Military-Base Deal
The U.S. reached an agreement that gives it access to four more military bases in the Philippines, broadening Washington’s efforts ...